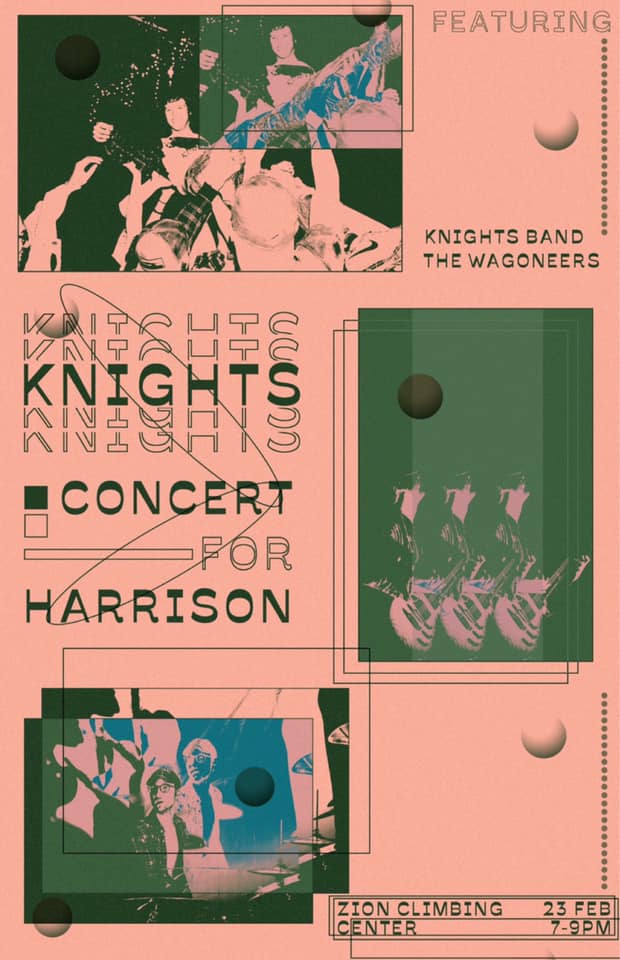 Men’s social club Knights is hosting a benefit concert to honor Harding alumnus and former Knights member, Harrison Waldron. On Saturday, Feb. 23, the concert will be held at Zion Climbing Club from 7 – 9 p.m. and include local bands.

Waldron graduated from Harding in 2015 with a degree in theatre appreciation. In August 2015, Waldron was injured in a four-wheeler accident while at a wedding rehearsal in New York. Waldron’s four-wheeler fell down a 10-foot drop, leaving him with traumatic brain injury, according to his sister junior Laura Waldron.

Activities Director for Knights, sophomore Matthew Musslewhite, said the lineup for the benefit concert includes a trio called the “Wagoneer” whose bandmates were fellow members of Knights with Waldron. Musslewhite also said a cover band of current Knights members will be playing as well. Other entertainment includes a t-shirt sale and coffee sold from local coffeeshop Mr. Postman Expresso.

Waldron’s legacy in Knights remains prevalent within the club today because of the award-winning Spring Sing show he directed in 2014, which led to a clean-sweep victory. Knights have not participated in Spring Sing since as a tribute to Waldron, according to Musslewhite.

“I thought it would be really appropriate for us to put our time and energy into raising money for Harrison while all of the other clubs are working on their Spring Sing performances,” Conn said.

According to Laura Waldron, his family has maintained his therapy up to this point, but now he is in need of more advanced treatment, which is why his family is seeking therapy at the Shirely Ryan Ability Lab in Chicago.

“It’s supposedly one of the best institutes in the world for traumatic brain and spinal cord injury,” Waldron said. “But it’s very expensive, and my family is honored that Knights are putting their creativity, love and effort into something so big and special.”

Musslewhite said the proceeds from the concert will go directly to the Waldron family. His hopes are that the Waldron’s will be able to use the money for treatment, groceries and other expenses.

When Conn was orchestrating the fundraiser, he said he had the Knights’ club motto in mind which is, “God first, others second, self last.” Conn said he wanted his social club to live out their mantra. He thought the concert was a great beginning for the club to live out a new season of service.

“It’s amazing to be able to serve someone [who] has done so much for our club,” Conn said. “Harrison was very involved.”

Musslewhite and Conn said both members from the Harding and Searcy community are welcome to attend the benefit concert. Tickets are $5 and will be sold in the Student Center after both chapels starting on Feb. 18.