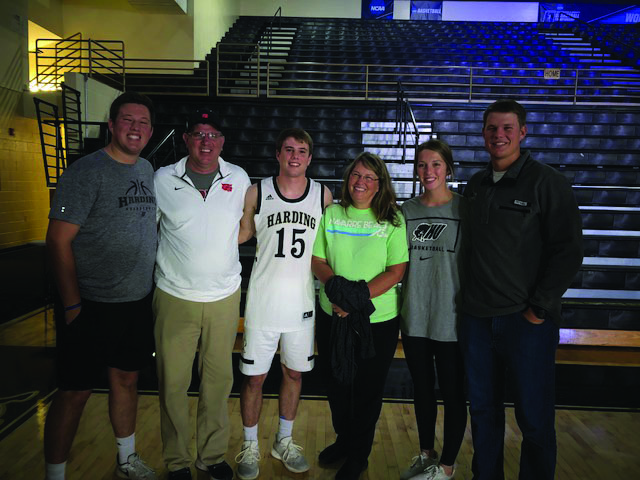 For the last six years, Brad has watched his sons don the black and gold. In 2013, Will Francis signed with the Bisons and played until 2017, when he shared the practice floor with his younger brother Alex Francis, who was a redshirt freshman.

“It’s fun in a way, because you can just go watch the games and not do the coaching part,” Brad said. “You still ride the ups and downs that go with the season a little bit, but it’s certainly not like when you’re the coach and you’re in the part of that.”

Brad graduated from Harding in 1989 before becoming the head coach of the Harding Academy girls’ team. The Francis name became a part of Harding lore when Brad was hired as the Lady Bisons’ new head coach.

As a result, Will and Alex were born into sports and the Bison brand.

“Ever since I was born, I had a ball in my hands,” Alex said.“We would always come up [to Harding] and just kind of play whenever dad came to work.”

The two boys were competitive with each other from an early age, which, according to Will, has helped Alex grow as a player and a man.

“I would come out on top a lot, just because I was older and bigger,”Will said.“But I think he would say it has helped him, always being around me and my dad and watching us go through it.”

But, as Alex learned from his brother and father, expectations also began to form. In his freshman season, Will was named to the All-GAC Freshman Team. He would average more than 10 points per game every season in his Harding career. In his senior season, Will shot .500 from behind the three-point-line.

“I think there probably is some [pressure] no matter if I was good or not,” Will said. “But he has handled it really well.”

Alex was not highly recruited out of high school. Following his brother’s footsteps as a product of Harding Academy, the sophomore said he always knew he would end up at Harding.

“Harding was just the option,” Alex said. “And I’m grateful for it, too. I think this is the best spot for me.”

Ever since I was born, I had a ball in my hands. We would always come up [to Harding] and just kind of play whenever dad came to work. – Alex Francis, redshirt sophomore guard

His freshman year, Alex was able to once again learn and compete with his brother as he spent the year on the sideline as a redshirt. In that time, Alex had the chance to learn his role and see the differences between his game and his brother’s.

“He’s a better scorer than I am,” Alex said. “I’m more of a ‘get it to other guys’ guy. I kinda just run the offense.” Now, Alex is carrying on his family name as well as the legacy and pressure that comes along with it.

“In high school, I felt the pressure a little bit more than I do here,” Alex said. “I’m just more mature. I just kinda think — there’s not that much pressure to really think about.”

One thing that helps quell the nerves: the support of a father and brother watching on, supporting him every step of the way.

The State of the SA | Investing in the next generation