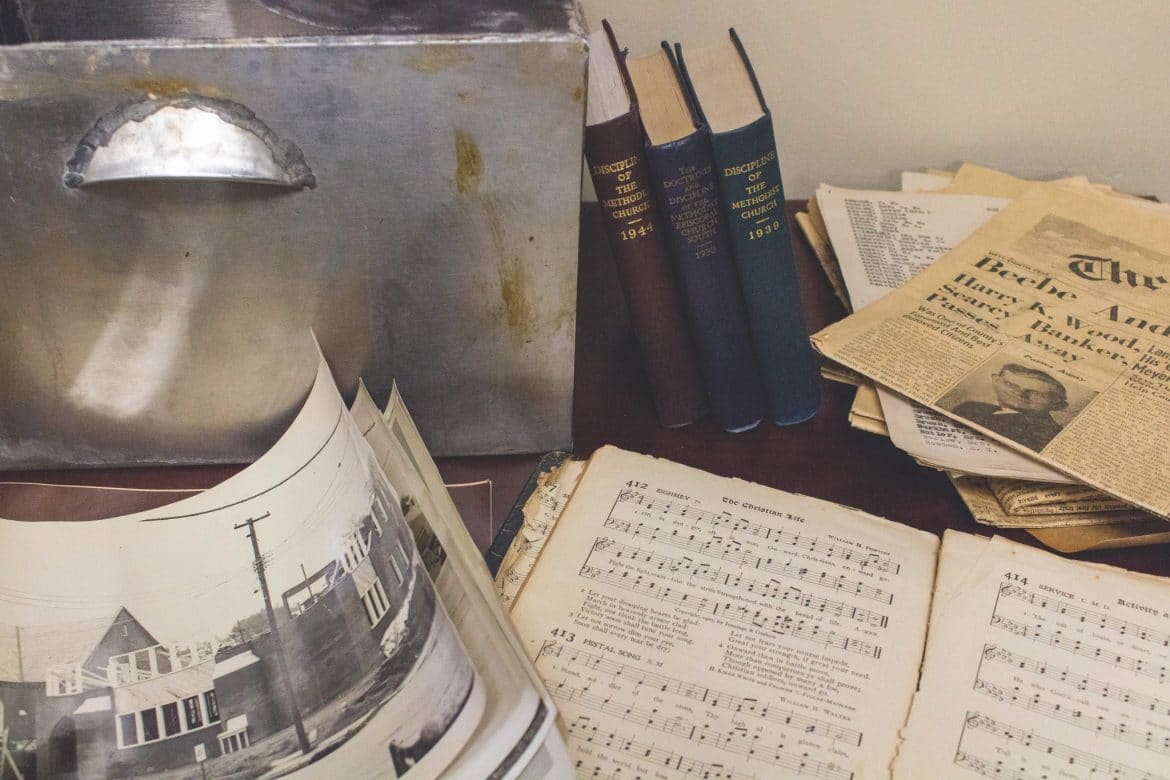 With the destruction of the education building at the Searcy First United Methodist Church came the unearthing of a time capsule which has been buried since the building was constructed 71 years ago.

In 1947, the members of the First United Methodist Church began construction on a new education building, and underneath the cornerstone, they buried a time capsule filled with photographs and documents of their time.

“The capsule was retrieved recently by construction workers who are now tearing down the building,” Kim Houser, who works in the offices at First United Methodist Church, said. “The capsule is stainless steel box, and it was completely sealed [and] had to be cut open.”

Inside were photos of the building being constructed and of the groundbreaking ceremony in 1947, several issues of The Daily Citizen newspaper from the 1940s, Methodist discipline books from 1939 and 1945, a complete membership list from 1947, and the personal hymnal of Rev. C. N. Guice with song numbers marked inside the cover. These elements serve as perfectly preserved reminders of the church 71 years ago.

“His placing his personal hymnal in the time capsule is a testament of his personal commitment and investment of time, faith, leadership and hope in the higher purposes of the congregation he shepherded,” Orr said.

Orr said there is a continuity of worship styles between then and now, but he noticed that newspaper articles from the past were more likely to be stories about the church than newspaper articles today. He also said the books of discipline were a reminder that every generation must navigate through agreements and disagreements and find a way to serve God.

“Seeing the items in the time capsule is a reminder that each generation of Christians meets the needs and demands of their own generation,” Orr said.

Harding will have a similar experience in a few short years, and the time capsule that was buried by the Olen Hendrix building in 1979 will soon be due for recovery.

“With the move to university status Aug. 27, 1979, we can feel a great spirit and attitude on the campus,” Chancellor Emeritus Clifton Ganus Jr. said in a 1979 bulletin. “A ‘University Day’ time capsule with appropriate memorabilia of the school was buried near the Olen Hendrix Building. It is to be opened in the year 2024, when Harding will celebrate its 100th birthday as a four-year institution.”

However, “appropriate memorabilia” may not be the only thing retrieved from the time capsule in 2024.

“I had just gotten back from spring break in Florida the semester Dr. Ganus buried the time capsule,” David Woodroof, a student from 1979, said. “When the capsule was being passed around, I snuck in some photos of myself in a straw hat picking oranges.”

Along with other memories from Harding in 1979, these photos of Woodroof will serve as a reminder that the spirit of our campus life has not changed much in the last 45 years.

Living Coral: more than a reef