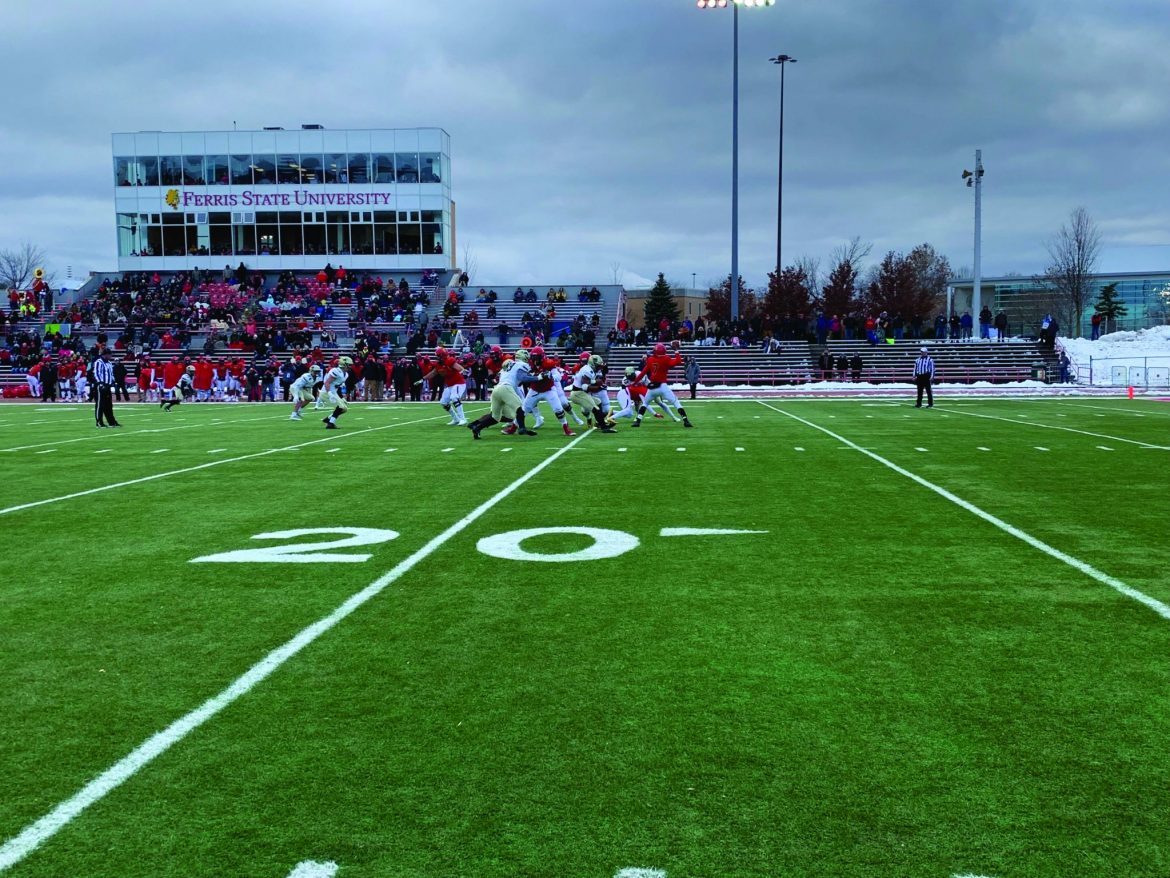 Harding’s comeback attempt came just short on Saturday, Nov. 17 as the Bisons fell to Ferris State University (FSU) in the first round of the NCAA Division II Football Playoff 21-19.

The game was a tale of two halves for the Bisons, who trailed 21-0 at the halftime break. In the first half, the Bisons managed only 90 yards of total offense. The 21-point deficit was the largest the Bisons had faced all season.

But as the sun peaked its way out from behind the clouds for the first time all weekend, the Bisons awoke from their slumber and dominated play in the second half.

Sophomore quarterback Preston Paden struggled early on. He threw his first interception of the season and was sidelined as part of the NCAA’s concussion protocol late in the first quarter. In the second half, Paden returned and breathed life into a stagnant Bison offense. Harding rushed for 172 second-half yards and three touchdowns, almost double the yardage they accumulated in the first half.

The Bison comeback began in the fourth quarter when sophomore running back Taylor Bissell carried the ball for a 5-yard touchdown run, but junior kicker Cameron Scott missed the extra point. That kick would be a decisive moment in the game.

“I don’t think we got beat, we just ran out of time,” Simmons said.

Harding’s defense experienced a resurgence in the second half as well. After allowing 174 total yards and 21 points in the first half, the Bisons locked down the Bulldogs rushing game and standout junior quarterback Jayru Campbell. The Bisons front seven recorded three sacks and held the Bulldogs to -23 yards rushing. FSU only managed one first down in the second half, and it came on the final drive of the half, as FSU ran out the clock.

The Bisons’ defense forced a fumble soon after the Bissell touchdown, and the Bisons scored again on a touchdown run by sophomore running back Cole Chancey to bring the score to 21-12. Because of the missed extra point, Harding went for the two-point conversion but failed to convert. The failed conversion left it a two-score game.

The Bison defense would hold again, and after an FSU punt, the Bison offense once again drove down the field. Bissell continued his standout second half with a 16-yard touchdown run to the left side. Scott’s extra point made the score 21-19 with just under eight minutes to play.

Harding stopped the Bulldogs once again, forcing a punt from deep inside FSU territory. The Bisons got possession with the chance to take the lead. After a gutsy run by Paden got the ball to the midfield stripe, the Bisons were called for a chop block. The penalty set up a first-and-25 from the Bisons 35-yard-line. The Bisons managed to get a fourth and eight, and Paden floated a pass over the middle to Bissell. The pass fell incomplete, and the Bison comeback fell just short.

“You shouldn’t be surprised if it’s harder for a team to come by yards in the second half, because that’s the type of people we are,” senior defensive end T.J. Winslow said.

FSU converted its only first down of the half and took a knee to run out the clock. Harding fell 21-19.

The Bisons finish their season with a 9-3 record. This was the third consecutive season the Bisons qualified for the NCAA Division II Playoffs. FSU advances to play Northwest Missouri State University, who defeated FSU’s rival Grand Valley State University. Harding’s seniors played their final snap against FSU, Winslow said that being a Bison has changed his life in so many ways.