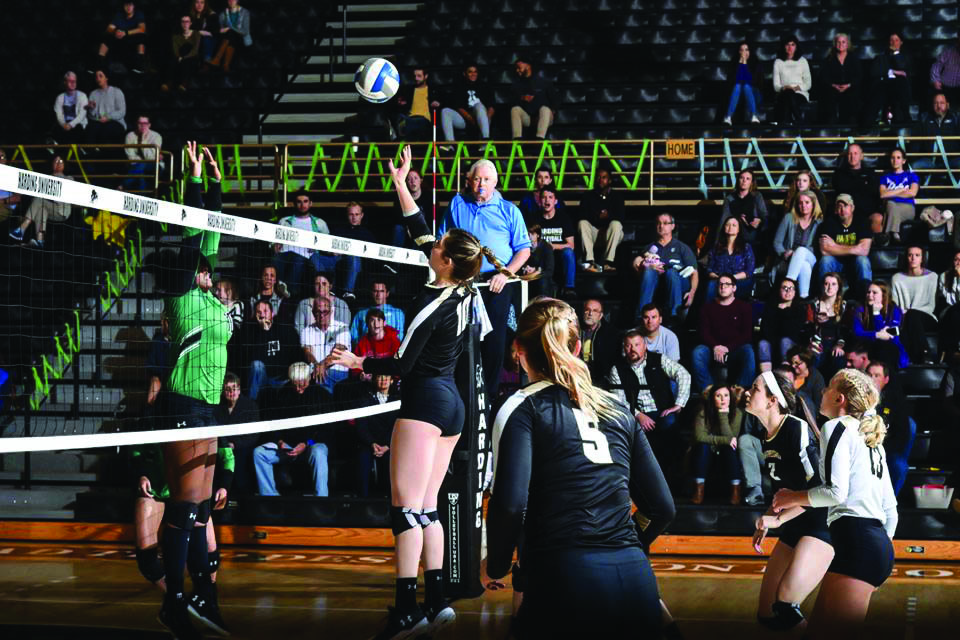 Senior middle blocker Zoe Hardin goes up for the kill against the University of Arkansas Monticello on Nov. 1 in the Rhodes-Reaves Field House. The 3-0 victory is the Lady Bisons 10th in a row. | Photo by Sterling McMichael

Head Volleyball Coach Meredith Fear said the team got off to a rocky start due to a tough pre-conference tournament schedule and team injuries, but the women were able to use what they learned throughout the rest of the season.

“It really kind of challenged the team to be holistic in their mindset,” Fear said. “We’re not just a starting lineup. We’re a whole team, and we can play well regardless of who goes in.”

Senior setter Rachel Heussner said the challenging pre-conference matches humbled the team and reminded them of the work before them.

The team has seven seniors who all came in together as freshmen, which brings a unique perspective to the team, according to Fear.  Each was honored as part of the senior night activities after the team’s final home game on Nov. 1.  Usually, transfer or injury will change a class as the years go on, but every member of this class stayed all four years.

“It’s just crazy to see how much we’ve grown as a program,” senior middle blocker Zoe Hardin said. “We’ve like grown up with one another kind of, so it was really cool to see how much of an impact it’s made on the younger girls. It was neat to see all the support and the fans that were there [on senior night].”

Hardin said this squad has been a family and a safe place for her over these past four years.

Heussner echoed Hardin’s feelings, saying this team has meant the world to her and has been a huge support system. She said volleyball is what brought her to Harding and what kept her here in times of struggle.

“I’ve grown more in volleyball but also grown off the court, which is something that is set at the beginning at Harding volleyball,” Heussner said. “Like, if you have anything outside of volleyball, like what’s going on in your life, coach wants to hear about it.”

Fear said she is very proud of her team and the leadership the entire team has shown, not just the senior class. She said she has been preparing her underclassmen players for the offseason, saying they will not be forced to fill a gaping hole, but rather adjust to a shift in roles.

“We’re still Harding volleyball, and we are a great program that is expected to do good things,” Fear said.

The Lady Bisons entered the GAC tournament as the No. 1 seed and are the favorites to win it. If they do, the Lady Bisons will automatically qualify for the NCAA tournament and extend the senior class’s career by at least one game.