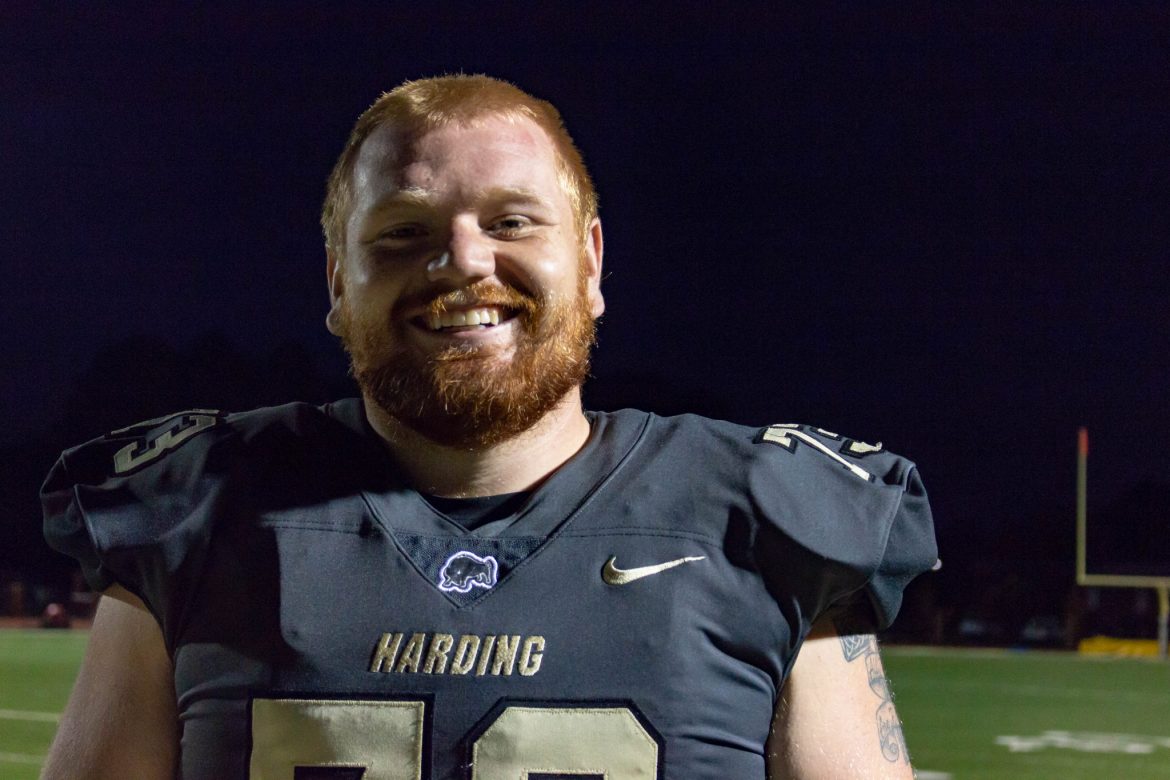 It has been a little more than four years since senior offensive lineman Brice Bray stepped onto the campus of Harding University as a wide-eyed freshman. Since then, Bray has started every game of the last four seasons and set the bar for offensive linemen at Harding. This Saturday, Bray will make his final home start when the Bisons take on Arkansas Tech at First Security Stadium on Senior Day.

“It’s been great playing for Harding,” Bray said. “I have been so blessed by this program. Playing for Harding has been way more than the yearly success. I have been a part of a brotherhood that genuinely cares for one another and loves each other.”

Bray has started 48 games at Harding, more than any other Bison in history. Over the course of his career, the Bisons have won a Great American Conference (GAC) championship and made the two deepest playoff runs in school history.

Bray said his favorite part of being a Bison has been the relationships he has built.

“It’s truly amazing how we have guys from all walks of life and guys who are very different from one another, but all share a common goal and become life-long friends,” Bray said.

Bray said that he has always looked up to his dad, who is his No. 1 fan and supporter. He said Head Coach Paul Simmons and Offensive Line Coach Kevin Chism have also been father figures to him during his time at Harding.

“Something I always like to remember is that you won’t always remember the score of the big games, but you will always cherish the little moments with your teammates,” Bray said.

Senior linebacker Sam Blankenship said throughout his time on the football team, no one has motivated him more to be the best he can be, on and off the field, than Bray.

“Bryce is not only the hardest worker on our team, he’s the hardest worker I’ve ever met in my life,” Blankenship said. “He refuses to be outworked, never has bad practices, watches more film than anyone and dominates the trenches on Saturdays …  he’s just special.”

His success on the field led him to be the first offensive lineman to ever be named GAC Player of the Week. He has earned three All-GAC nominations and has been named to the Division II Conference Commissioner’s Association (D2CCA) All-Super Region 3 second team twice.

Blankenship believes that Bray will eventually be in the Harding’s Hall of Fame and excel at whatever he does post-graduation.

“Bryce has not only started every game, he has dominated opposing defenses his whole career,” Blankenship said. “Defenses hate playing against him because they know what’s coming. He’s a great player on the field, but an even better man and friend. I can always count on him to have my back.”

Bray has been an integral part of the Bison offense and a key part of its year-to-year transition. Bray has handed the ball to three different starting quarterbacks over three years. After this weekend, if the Bisons do not qualify for the NCAA Tournament, Bray will hand the ball over to his replacement when he walks off the field for the final time.

Senior defensive back Frank Herbert said Bray is the type of player every team wants.

“Bryce is a competitor,” Herbert said. “Whenever it’s time to go to battle, I know I can always count on him. He has been a solid center for us since freshman year. He’s a leader on and off the field.”