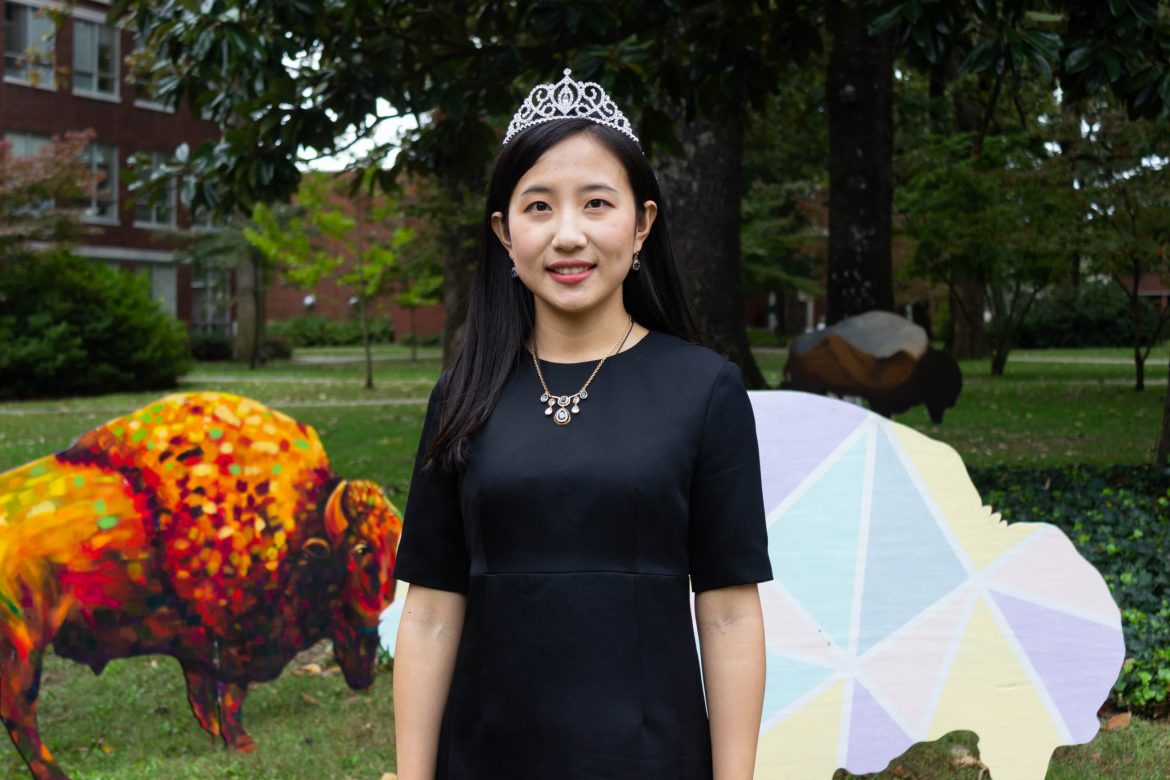 Senior accounting major Wanru Huang, who also goes by Cloris, was crowned Harding’s Homecoming Queen on Oct. 20, 2018. Huang was nominated by the Multicultural Student Action Committee, one of the many campus organizations she is a member of. | Photo by Ryann Heim

Huang, an accounting major, transferred to Harding in 2015 from a university in China. Since moving to Searcy, Huang has been involved in many organizations across campus, including the Multicultural Student Action Committee (MSAC), by which she was nominated to be on the Homecoming court.

According to Huang, when she first received an email saying she had been nominated to represent the committee on the Homecoming court, she misunderstood and thought she was being asked to volunteer for the event. Huang said she was shocked when she realized what the email really meant.

“I never thought I’d be a part of the people on the stage,” Huang said.

Along with the MSAC, Huang has been a member of the Harding Chinese Students and Scholars, the Accounting Society, Financial Planning Association and the American Studies Institute. She has also helped plan many campus activities, including the Chinese New Year and the Moon Festival.

Her first semester in Searcy, Huang’s campus involvement began after she joined women’s social club Delta Nu to get to know her American peers better. According to Huang, Delta Nu was where she made her first friends at the university and was where she first felt “welcomed and loved” at Harding.

“She’s so kind and handworking,” senior Karena Barlow, Delta Nu member and Huang’s friend, said. “You can just tell how much she impacts campus through everyone who knows her.

Barlow, along with thousands of students and guests on campus, saw Huang receive that recognition at the Homecoming crowning ceremony during halftime of the Homecoming football game. According to senior accounting major Hannah Foust, Huang’s new title is well-deserved.

“I’ve never met someone so genuinely kind and passionate,” Foust said. “She is never afraid to ask or challenge our professors; she is constantly seeking to satisfy her growing curiosity. I admire Cloris for her tenacity and spirit in her academics and in her friendship.”

Ellis Sloan, assistant professor of business, escorted Huang during the halftime ceremony at the Homecoming game. Sloan is not only Huang’s academic advisor, but is also one of her “life mentors.”

“Normally a father would escort [a nominee],” Huang said. “I asked [Sloan] if he could be my escort, if he had time, and he said that he would make time for me. I appreciated that.”

Huang said she still has a hard time wrapping her mind around the love she has received while at Harding. Her nomination and sequential crowning represent her Harding experience: one filled with kindness and constant support.

“I feel full,” Huang said. “When people were cheering for me, I just felt the tears around my eyes. I felt confident, encouraged — like so many people loved me.”