Homecoming tailgates: Best of the Best 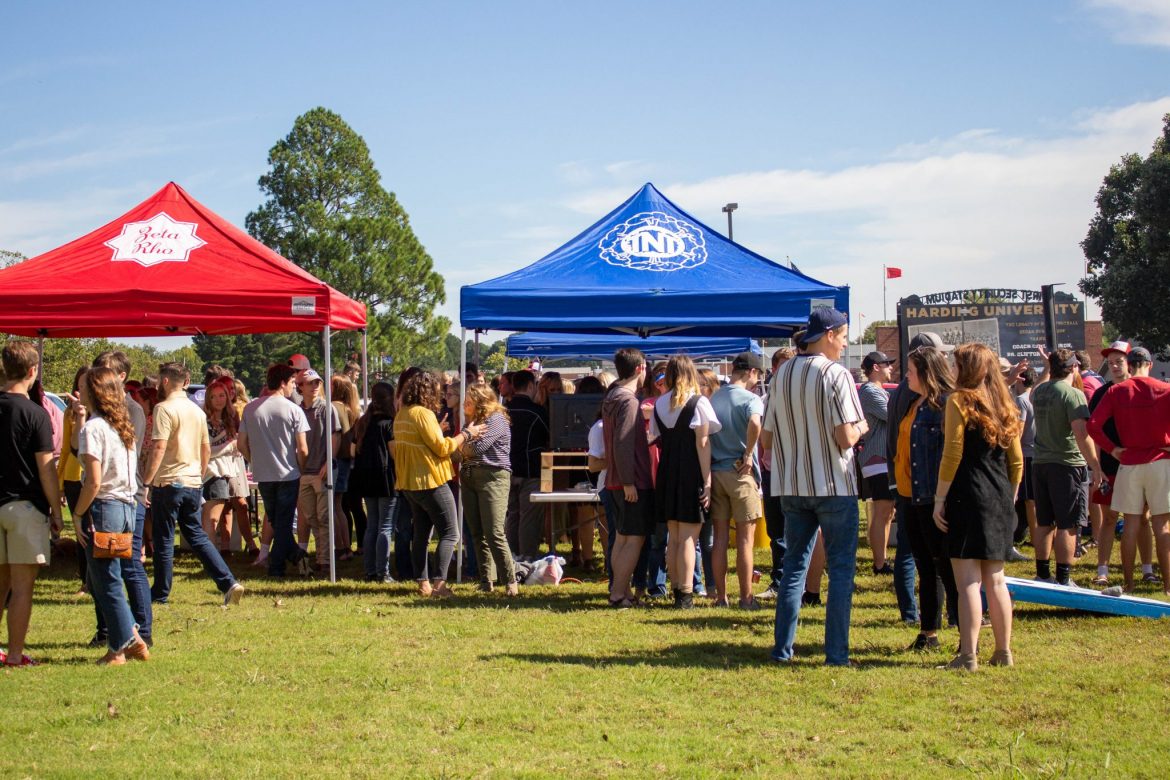 This past weekend, The Bison newspaper’s sports editing team traversed Bison Park to explore the tailgate scene at Harding University on Homecoming weekend. Six hot dogs, four burgers, three sandwiches and an upset stomach later, we are prepared to hand out some awards to the top tailgating crews.

The sports team is not biased at all in our decision to rank this tailgate No. 1. It had good food, a nice fall aesthetic and a fun atmosphere. “If you do not rank us No. 1, you are both fired,” editor-in-chief Kaleb Turner said. No worries, Kaleb, you earned it. (We have journalistic integrity. We swear.) Sophomore Alex Beth, senior Troy Donohue and sophomore Joshua Morgan grill at the Omega Phi/Iota Chi tailgate on Oct. 20. The trio are The Bison’s “Grillmasters of the Week.” | Photo by Loren Williams

As the team walked into Bison Park, the smell of the grill at this tailgate could be detected immediately; something good was cooking. Leave it up to senior grill master Troy Donahue to deliver a delicious blend of steak, cheese, grilled onion and bread that stood far above the rest. Beyond that, this tailgate’s desire to share with everyone who came by made it one of the best atmospheres on campus last weekend.

The team ate a lot of hot dogs last weekend, but none compared to those grilled by Sub T-16. Going beyond Oscar Mayer or Ball Park Franks, the hot dogs which came off their grill had a better blend of seasoning and flavor than the rest of the hot dogs we ate combined. By the time we arrived, we had already tried five hot dogs and were sick of them, but this one pushed through those mental barriers to stand out as top dog.

Speaking of dogs, we saw a dog in a Gamma Sigma Phi jersey, and if that dog were a human, it would have been a football-playing seventh-grader. It was that big. All dogs are good dogs, but that beautiful beast takes home the award of best dog.

No sound should be associated more closely with a tailgate than slightly out-of-tune singing to popular songs, and Knights delivered ten fold, offering up the sounds of its newly released album “1968,” which honors the club’s 50th anniversary. As we arrived, we could hear the sweet, velvety tones of senior Bronson Crabtree singing “Carolina in my Mind.” The song set the tone for the laid-back, fun experience this tailgate had to offer. The club also handed out some free copies of the album, so we could carry the magical tailgating feeling with us wherever we go.

The sports crew still has not decided if this award is a positive or a negative. As we arrived under the tent, we were surprised to find a color we had seen very little of over the course of the day: green. Sure, Pi Theta Phi also had plenty of sweets including some donut holes and cookies, but the presence of vegetables and fruit made this the only logical choice for the title of “healthiest.”

TEKEL is the only word to accurately describe the sports writing staff’s opinions of this weekend’s burgers. Found in Daniel 5:27, it means, “You have been weighed on the scales and found wanting.” The burgers need more seasoning and, in some cases, less lighter fluid.

Delusional Optimism | Welcome to the Club