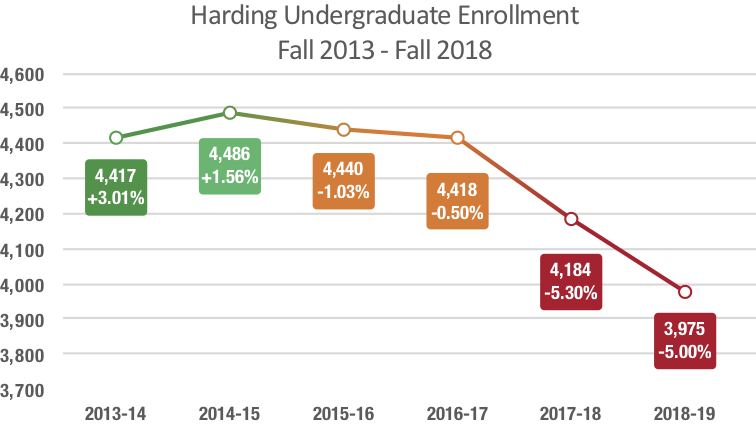 Harding University enrollment numbers fell to 5,122 undergraduate and graduate students in fall 2018, following a decline since 2011. Harding, however, is not alone in the downward trend.

According to the National Center for Education Statistics, college enrollment in the U.S. has dwindled since 2010, shrinking from 21 million students to 19.8 million in 2016. In Arkansas, total college enrollment dropped 1.3 percent from fall 2017 to fall 2018, but private institutions have increased 0.5 percent in the same time period, according to the Arkansas Department of Higher Education.

According to the Bureau of Labor Statistics, the unemployment rate in August 2018 was 3.9 compared to 9.0 in August 2011. When the unemployment rate drops, sometimes high school graduates will join the workforce instead of attend college. Jana Rucker, vice president for university communications and enrollment, said the trend in higher education also comes from lower birthrates, different educational products and a good economy.

“I think anytime you see the numbers go down, you get a little nervous,” Rucker said. “It affects our ability to do certain things, but we also aren’t sitting still.”

Rucker said the competitive nature of higher education might call for more aggressive techniques, such as digital campaigns, a platform to keep prospective students engaged throughout the enrollment process and customizable viewbooks tailored to prospective students’ interests.

“We knew Harding was strong,” Rucker said. “Being able to express that in a consistent and powerful and concise way is really important.”

“Part of our funding and tuition dollars do fund some of our operational expenses, and so when that revenue decreases, there may be things we have to put off or delay or reduce,” Rucker said.

“Financially, we will be fine this year,” Sansom said. “We always budget a substantial contingency to handle unforeseen expenses or drop in revenue. We will also be closely monitoring our expenditures, primarily by delaying some hiring of employees and deferring some maintenance and construction projects.”

Sansom said the university hopes to save by not replacing some positions after retirements and resignations and by reviewing open positions to possibly reorganize duties.

Jeff Morgan, athletic director and men’s basketball coach, said the athletics operating budgets were cut a little this year, but coaches do a good job growing their rosters, and several rosters have increased. He said, while not all student athletes receive full scholarships, most sports offer the same number of scholarships each year, and some have increased over the years.

“While we have cut back a little in each of our operating budgets, we have all looked at ways to absorb that and to be good stewards with the money the university gives us to work with,” Morgan said.

Hannigan recruits students from Tennessee, and he said most students who choose an option other than Harding cite finances as the number one reason.

“There’s a big magnifying glass on college debt right now, and that was not the case five, especially 10 years ago,” Hannigan said. “More people are thinking about that than they ever had before.”

On the other hand, Hannigan said students tend to choose Harding for the university’s academic reputation, relationships and community. He said the average ACT score increased in the freshman class this year, and several National Merit finalists choose to enroll every year. Harding also recently received two rankings in national media: third in student engagement from The Wall Street Journal and tied for 20th in a list of the best regional universities in the south from U.S. News and World Report.

“A free car may not be the most reliable car,” Hannigan said. “Sometimes you have to see what the value is of what you’re getting.”

Hannigan has worked at Harding for seven years. He said the approach to recruitment now is similar to the approach in the past, but the way recruiters communicate with students has changed.

“The way we communicate is a lot less fact, fact, fact,” Hannigan said. “We have to tell stories.”

Students have also felt the factors that contribute to the decrease in enrollment numbers, both as they come to Harding and as they leave.

Senior Leah Taylor is a student worker in the admissions office as well as a student ambassador. She gives three tours a week to prospective students.

During high school, Taylor deliberated between attending Mississippi State University and Harding, but she ultimately chose Harding to pursue her studies in communication sciences and disorders.

“One thing I was looking for in a school was a tight-knit community and somewhere that I could grow as a person — academically and spiritually,” Taylor said. “I found that here.”

Pepperdine University, Freed-Hardeman University and Lipscomb University — other private, Church of Christ-affiliated universities throughout the U.S. — have not publicly released fall 2018 enrollment data yet, but have not shown the same decline in enrollment as Harding since 2013.

Pepperdine freshman Heather Chaffin said she chose to attend Pepperdine instead of Harding this fall because she felt like everyone from her church went to Harding.

“Don’t get me wrong,” Chaffin said. “Harding and the people there are great, but I knew from the start that I wanted something different.”

Chaffin said she found the strict curfew and dress code unappealing, and she applied to Harding more out of obligation than desire. She said she was drawn to Pepperdine for the way they treat students and encourage them academically and spiritually.

“I have never felt a larger presence of God than on [Pepperdine’s] campus,” Chaffin said. “Not because it is forced, but because they supply outlets in which you can find God free from judgment or embarrassment, ask questions that aren’t always welcome in the church, find yourself in a place far from home and truly listen to other people’s point of view and grow from it.”

Chad Davis came to Harding in fall 2015 but left in spring 2017. He dropped out the fallsemester of his sophomore year due to health problems following a gastric bypass surgery, and he returned in the spring but withdrew completely that May.

“The weight of the cost of school was really … bearing down on me,” Davis said.

Now, Davis works as a wedding photographer in Fresno, California. He said he left Harding because he did not need to spend $20,000 per semester to become a photographer, and, though he felt Harding supported him as much as possible, student loans were building.

“I just always kind of felt weird that there were all these kids and other people also my age that had no qualms with going out to eat every single meal, going to Sonic three or four times a day, when I seriously have like a cabinet with three cans of beans and three cans of shredded chicken from Walmart,” Davis said.

Davis said he wanted to stay for the environment and the people, but he was spending too much money for just a nice place.

“Regardless of how amazing and wonderful it is — the people, the school, you know … it just became no longer an option,” Davis said.

Like Davis during his second year, sophomore Breanna Bonds also faces the choice of whether or not to leave the university.

“I wasn’t really a Christian before, but I got a letter in the mail that looked appealing,” Bonds said. “I was like, hey, why not try it out on a trial basis, and I decided that I was going to try the first year, see if I liked it. If I didn’t, then I’d transfer, but I was here the first semester and fell absolutely in love.”

Bonds said she does not want to leave, but she lost her honors scholarship last year. She worked for Aramark then, and she is hoping to get a job at Subway this year. She said she also has bills outside of school, and she sometimes sends money home.

“If I want to stay, then I have to work, but if I want to work to be here, then I still have to get good grades,” Bonds said. “It’s not necessarily even that it’s a lot of work hours, but going to school and then rushing to work – it’s tiring.”

A native of Bentonville, Arkansas, Bonds said several of her classmates chose to join the workforce out of high school, and if she had to leave Harding, she said she would probably join the workforce rather than attend a cheaper school.

“I think [Harding is] more expensive than state colleges because it is a private school, but as far as private schools go, I don’t think it’s that expensive,” Bonds said. “I think Harding is cheaper overall, and they offer more in scholarships. … All of last year I didn’t have to take out many loans because it was basically covered by scholarships.”

Bonds said she is working to earn back her scholarship, and if she does, she can stay.

An Ode to Nancy | At the Table