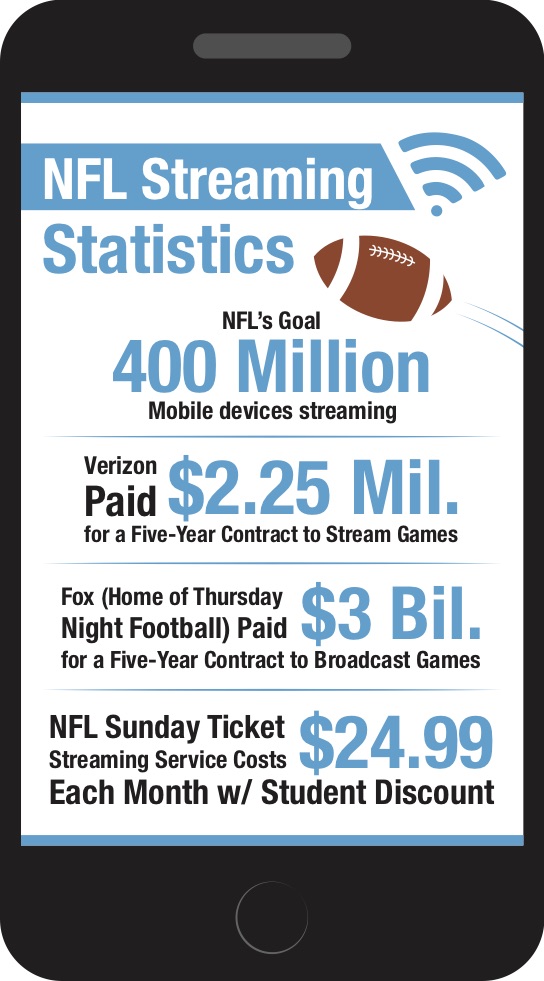 The NFL is rolling out a new streaming policy to try to get more viewers to watch games on their phones. For the 2018-19 season, the league and its broadcast partners, CBS, Fox, NBC and ESPN, announced the NFL app will now stream live games. Fans can download the app on a mobile device or connected TV and stream live in-market as well as primetime games, like Sunday Night Football and Monday Night Football, for free.

“I remember as a kid being upset because we did not have cable, and it always seemed the good games were only on ESPN. All you had to look at was the little box score on the side of the screen,” junior Luke Lines said. “But now it puts the TV in your pocket and gives you access to more than just one game.”

The NFL mobile app previously allowed Verizon Wireless customers only to stream live games on their phones. Verizon paid out $2.25 million to the NFL for a five-year contract to stream games on all of their streaming platforms, including go90 and Yahoo.

That deal was signed last season and remains in effect today, except that the NFL mobile app will cease to exist. However, games can be streamed on the Yahoo Sports app now, which is owned by Verizon. The NFL intends to reach at least 400 million mobile devices with all the new ways to stream games.

NFL viewership has declined over the past three seasons, according to The Wall Street Journal. With more fans being able to stream games on mobile devices, the league is hoping to gain a lot of its viewing audience back.

“I will always tune in to see who is playing Thursday night … the teams and the quality of the game decides whether it’s worth my time to watch,” Lines said.

These new streaming services are only good for live, in-market games, so if your team plays out of market, you will need NFL Sunday Ticket to watch every game. Sunday Ticket is a subscription through DirectTV, which allows you to watch every NFL game. There is a student discount for Sunday Ticket that reduces the cost from $73.49 to $24.99 a month for four months.