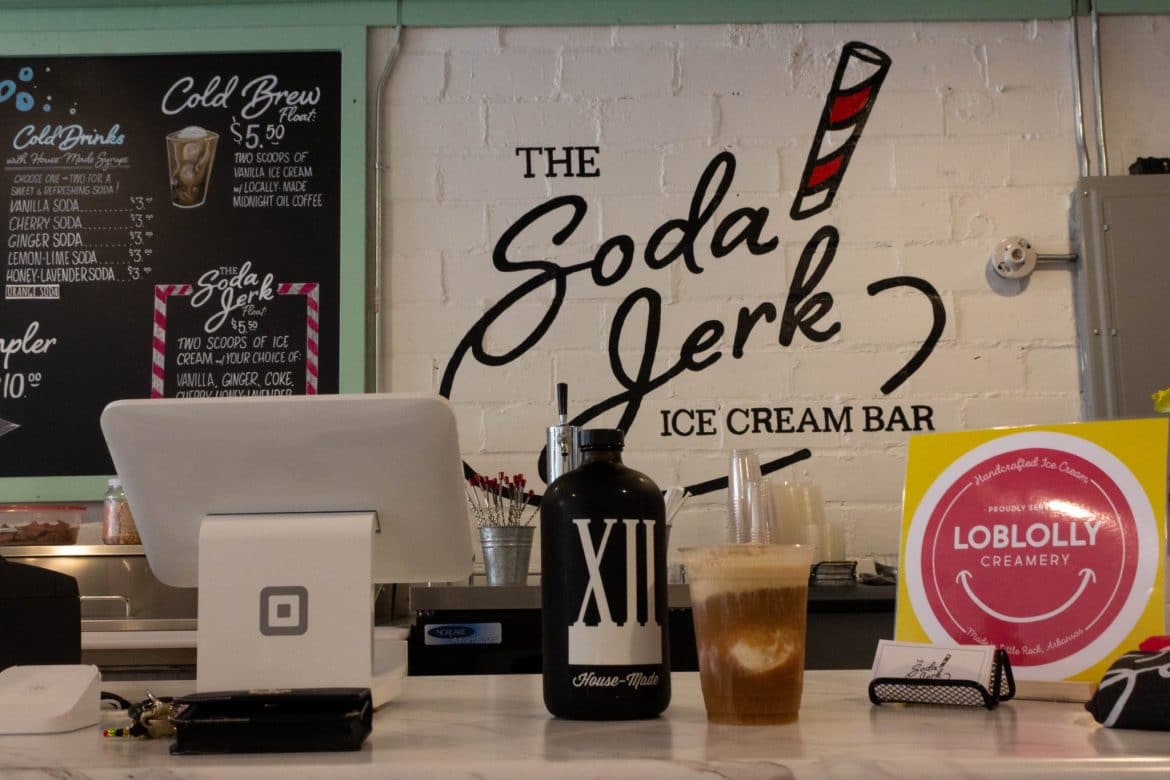 Searcy’s newest downtown business, The Soda Jerk, opened July 15, 2018, and joined other Searcy small businesses in a collaboration of services and products. | Photo by Ryann Heim

Searcy’s newest downtown business, The Soda Jerk, opened July 15, 2018, and joined other Searcy small businesses in a collaboration of services and products.

According to senior Marley Cole, graphic design major and the branding developer for The Soda Jerk, the business has been supported by the community since it was opened by owners Bill Milton and Angela Sivia, who knew they wanted community and sentiment to be at the forefront of their new business.

The new ice cream shop was also welcomed by another community — a community of businesses supporting one another. One of their products, the Cold Brew Float, supports Kibo Midnight Oil Coffeehouse by using their products as an ingredient in the float.

This ‘undeclared small business network’ is unique because they are not competitive with one another, according to Bill Ford, owner of Wild Sweet Williams. Ford said each business does what they do well together, no one trying to take business from one another.

“All of us want to see each other succeed. There is enough room in town for all of us as well,” Ford said. “I think everybody kind of has that view of wanting to be the changes they want to see.”

Amelia Brackett, owner of Savor + Sip, said the businesses also contribute to one another by sharing business information, exchanging contacts, giving advice, donating equipment, writing positive reviews and spreading the word about each other’s businesses when the opportunities arise.

“They just provided me with resources that I didn’t even know I needed,” Brackett said. “It has been like a team, not so much like we’re all competing against each other.”

Besides consistently purchasing products from one another, they all also honor “the neighbor discount,” said Brandon Fox, owner of Burrito Day. The neighbor discount is one that gives certain surrounding businesses 10 percent off and is always available.

Each business considers these benefits to be a courtesy between friends rather than a business deal with a desire to see the community grow and support each other along the way, according to Fox.

“I think the biggest part is that all of us are interested in community,” Fox said. “It’s not just running a business and making money. It’s about connecting with people and that being the bigger picture.”