Home Features “The Hypnotist” on 13 years of Impact

“The Hypnotist” on 13 years of Impact 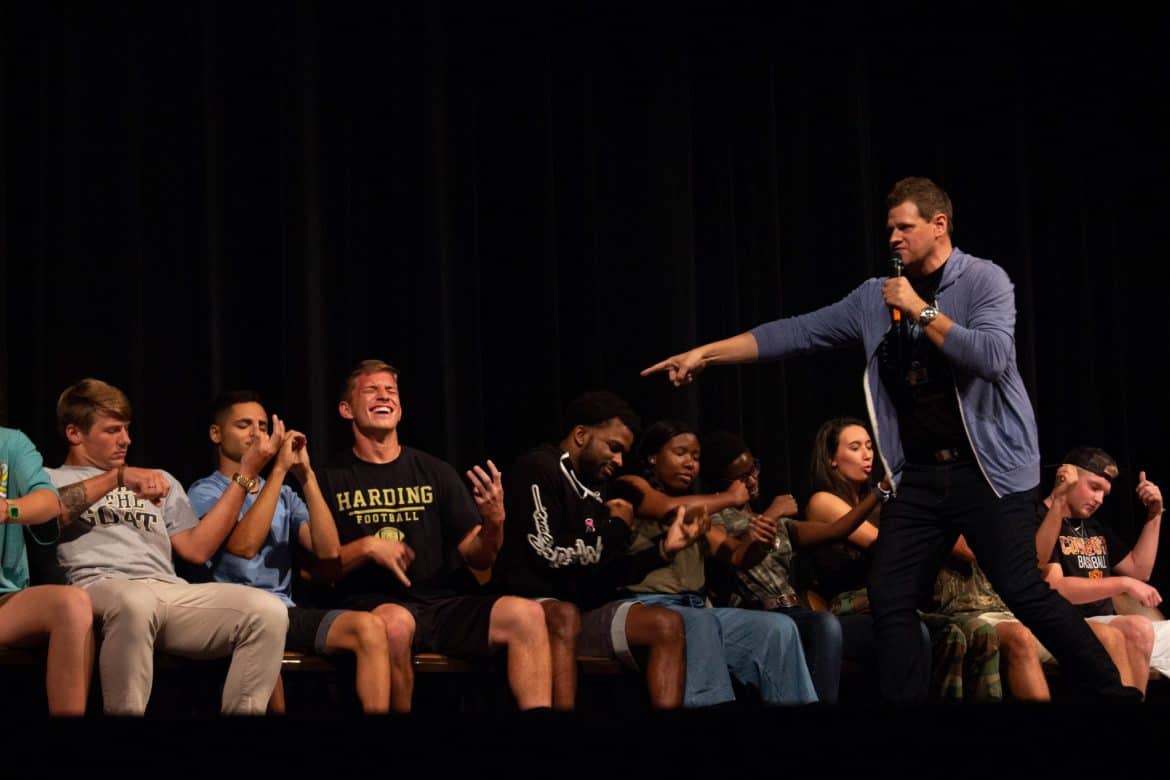 For more than a decade, Impact, Harding’s freshman orientation event, has featured Dale K, a traveling hypnotist and comedian better known around campus as “the hypnotist.” As the finale of the weekend, the show brings together not only the incoming students and transfers, but the returning student body, faculty and staff as well.

“When I look back, it just seems like a few years. But when I really look back, it’s been a long time,” Dale K said about his thirteen years at Harding. “I don’t know what magic is on this campus, but there’s something always crazy that happens that I just go, ‘This is the best thing I’m going to see all year.’”

Dale K explained that, though he is usually booked every night of the month during his busy season, Harding’s Impact show has always stood out to him.

“It’s a special place, it’s a beautiful room . . . they’re just a good, creative, energetic group of people,” Dale K said. “You’ve got people from all around coming to this school, and I think when they get up there, you see how diverse everybody is and how they react to different things in different ways.”

Beyond the row of chairs he fills with volunteers at the beginning of the program, his show requires very few props. But, after the participants are selected and put “under,” the hour is full of almost non-stop laughter.

“Students love it,” Logan Light, director of campus life, said. “There’s a laughter that’s like, ‘That’s not me, whew. That’s not me.’ . . . It’s been the thing that brings students back to campus. They come back [and say], ‘See you at the hypnotist.’”

One of this year’s participants, junior Toni Sharp, has attended Dale K’s show every year since attending Impact herself.

“It’s kind of fun to watch other people do things we could never picture ourselves doing,” Sharp said. “Freshman year, I never would have gone up on stage and essentially embarrassed myself in front of the entire student body, . . . but people go because they’re curious if something like that can actually work.”

Sharp explained she had always wondered how it felt and decided to experience it for herself this year.

“I was surprised that it worked,” Sharp said. “It was kind of weird, because you’re aware of everything that’s going on. I was aware that the audience was out there. I was aware that he was asking me to do things. But you’re just so relaxed that you’re like, ‘Yeah, that sounds like a good idea, I’ll do that.’”

Light said although the show may seem hard to believe, Dale K’s technique is straightforward, and the performances are all a part of the experience.

“He’s very upfront by saying, ‘This isn’t mind control, this isn’t wizardry. There’s a science to this,’” Light said. “It doesn’t feel like it’s coercive in any way. It’s a real odd feeling. You’re both aware and not aware at the same time. He talks about the power of suggestion, and that’s just what it is.”

Dale K described his first hypnotist experience at 16 as both intriguing and inspiring.

“Back then, there was no internet, nothing like that,” Dale K said. “I would look for books. I grew up in Canada, so I remember going through snow up to my knees to a library and trying to find a book. . . . Finally, I just read enough books and gave it a shot. It clicked. Fast forward to some trial and error, two steps forward one step back kind of a thing, and here I am in the metropolis of Searcy.”

Dale K explained that his approach has changed over the 30 years he has worked as a hypnotist, and that most of his material he has developed himself, but that he hopes the freedom he allows between him and his participants on stage to “create” makes his show unique.

“When you think about anything, it’s those people that took a risk or thought outside of the box that make history,” Dale K said. “I think the best advice is to make sure ‘you do you.’ Stay true to yourself.”

Impact is intended to connect incoming students with each other, as well as the rest of the Harding community. And “the hypnotist,” as the conclusion to the Impact experience, has epitomized that effort year after year.

“It has become kind of a rite of passage and a ritual of sorts,” Light said. “I think that is another reason why people enjoy it so much: That memory of, ‘this is what me and my friends do when we come back to school.’”