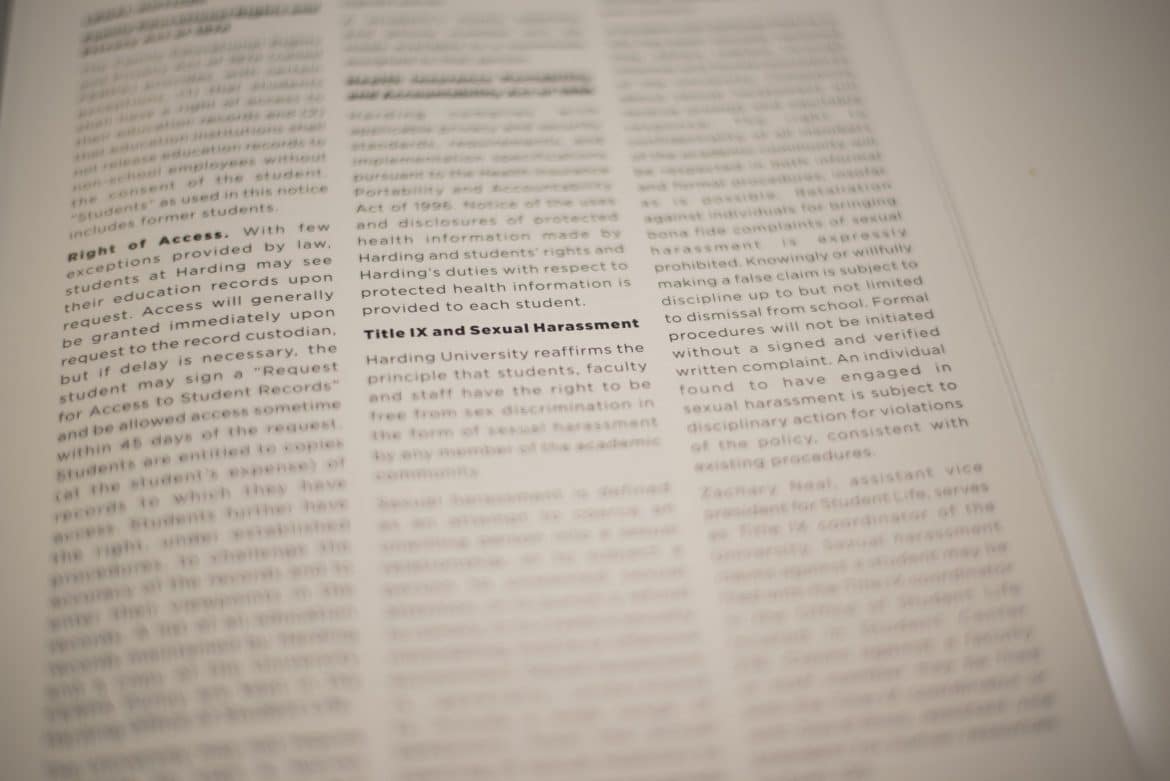 Conversation regarding language in the 2018-19 Student Handbook sparked over the weekend surrounding the “Title IX and Sexual Harassment” section on page 45, which states that sexual harassment includes “the actual coercing of sexual relations to the unwelcome or inappropriate emphasizing of sexual identity.”

The language was called into question by alumni and students on social media. HU Queer Press 2.0, an independent, non-Harding-sanctioned organization seeking to bring awareness to LGBTQ issues on Harding’s campus, also joined the conversation by condemning the language with a response on their website and claiming it as a “new addition” to the 2018-19 handbook.

According to Zach Neal, dean of students, the language is not new and has been in the handbook for at least 18 years. The goal of the language and the university, Neal said, is to protect all students.

“The intent is to communicate that no students, staff or faculty are allowed to coerce you into physical sexual acts nor are they to say or do anything that highlights or taunts your sexual identity,” Neal said. “The harassment of any student will not be tolerated.”

Senior Karena Barlow took to social media to share her frustrations with the handbook language by sharing a post from HU Queer Press 2.0. Barlow said in an interview with The Bison she feels the language used could cause LGBTQ students at Harding to feel unsafe if they chose to express their sexual identity.

“Even if you’re not in a relationship and you’re not sexually active, it feels like they could kick you out just for saying that you’re LGBT, and I don’t think that’s right,” Barlow said.

Though Barlow said she believes the handbook language should be changed regardless, she added that she may have not interpreted the language as it was intended to be read.

“If it were to say, ‘Emphasizing somebody else’s sexual identity,’ that would make a lot of sense. It would make sense why it is where it is,” Barlow said. “I think if Harding did mean it that way, they should come out and say, ‘Hey, this is poorly phrased, let’s work to fix it.’”

Neal did not comment on whether or not the university would make changes to the language called into question. He encourages any students who have been sexually harassed to report the behavior to a Student Life dean or Public Safety.