A Hundred Letters From War: an Old Time Love Story 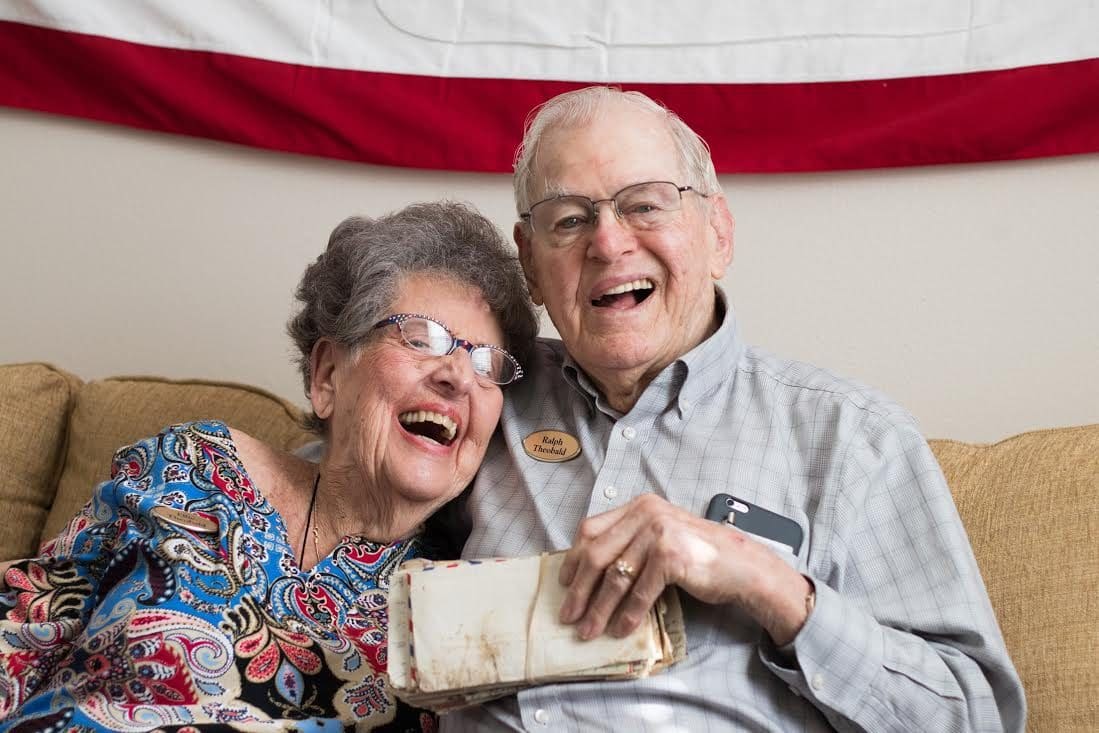 When Ralph Theobold enlisted in the Navy during World War II at age 17 to fulfill what he considered his patriotic duty, he did not lose touch with his girlfriend back home — they wrote to each other every day.

During his 13 months of service, Ralph and his now wife Eleanor, who goes by Ellie, corresponded with over 100 letters, which they have kept in multiple rubber-banded bundles through cross country moves and 71 years of marriage.

The 90-year-old residents of Harding Place met September of their senior year of high school in central Illinois. Although he did not start boot camp until June, Ralph enlisted a month after they met.

“We were in study hall. She went to the proctor to ask a question, and that’s when I saw her,” Ralph said. “For me, it was love at first sight.”

Ellie agreed it was Ralph’s duty to serve in the Navy, as both of their fathers had served in World War I. She originally planned to fulfill her patriotic duty by becoming a military nurse along with many of her classmates.

“You would’ve got to wear that nice uniform,” Ralph said, laughing.

Instead, Ellie enrolled at the University of Illinois and studied family and consumer sciences while Ralph was in boot camp as the war came to an end. He recounted how Japanese suicide bombers drove their planes into American naval ships during his service.

“I could picture myself out there on the ship with … people diving their airplanes at me,” Ralph said.

Ralph did not return home until the summer of 1945, more than six months after Japan surrendered, when he enrolled at University of Illinois.

Shortly after, Ellie moved away to work in the state capitol, but they continued to write to one another.

Finally, in June of 1947, after three years of an intermittently long-distance relationship, they married and lived together at University of Illinois before moving to Chicago where Ralph attended Northwestern University Medical School.

They lived in Springfield, Illinois and Quincy, Illinois while he worked as a radiologist and she stayed at home with their three children.

Now, they have six grandchildren — one of whom attended Harding — and six great-grandchildren. They credit their steadfast commitment to each other for 71 years to their faith.

“When we were married, the divorce rate was considerably (lower) than today. I think that everything in a marriage doesn’t go along smoothly. You have to work out your differences,” Ralph said. “I think one thing that kept us together was the kids. We just seemed to work through our tough times. Religion comes into it. You need to go to church together, have Bible studies.”

With their oldest son and daughter-in-law living in Searcy and a grandson in Cabot, they were drawn from Clearwater, Florida, where they retired, to Harding Place only 10 months ago.

When asked what they enjoyed doing together, Ellie promptly said “Make love.” Ralph laughed and recounted their international trips together to Asia and Europe and Wii bowling at Harding Place.

“She’s good looking, she has a good sense of humor. We always have fun together,” Ralph said.

Ellie said their love is not exceptionally special, but reflected on it fondly.