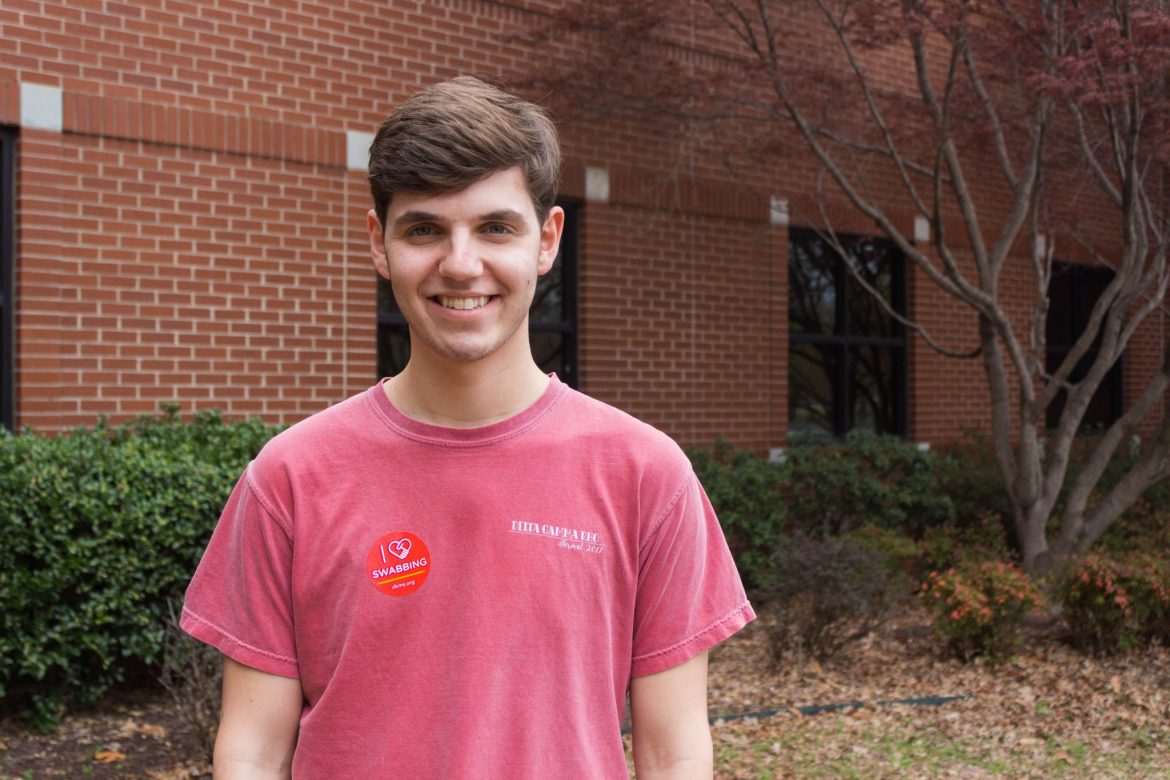 In September of that year, a representative from DKMS, an international nonprofit organization striving to eliminate blood cancer, contacted McAlister. He was told he was a potential tissue match for a woman with leukemia who was in need of bone marrow.

“I had heard of people who had been on the registry for 15 to 20 years … I didn’t think it would happen so fast,” McAlister said.

After doing bloodwork, McAlister received confirmation that he was the closest possible match for the patient.

In January 2018, McAlister traveled to Washington, D.C. with his mother, where the donation procedure was completed within a few hours. As with any bone marrow donation, his travel, hotel and food expenses were covered by DKMS and the National Marrow Donor Program.

“I don’t want it to seem like I’m saying, ‘look at how amazing I am,’” McAlister said. “I want to tell people about it because I want to encourage people to do it.”

Senior Peyton Buehrer also got swabbed during Spring Sing weekend of 2016, after seeing friends at a swabbing station. After returning from Harding University in Australia in December 2016, Buehrer was notified that he was a potential match.

“They told me the match was potentially an infant, so when it’s (an infant), they have to do the (procedure) in your back,” Buehrer said. “It was going to involve being sore for a lot longer, so that made me kind of nervous.”

Despite the nerves, Buehrer described his decision to continue the process as a “no-brainer.” Over winter break that year, he did bloodwork that would be reviewed over the course of a month.

However, within a month, Buehrer was notified that he was no longer needed as a match, the reason being unknown.

According to Buehrer, sometimes patients die before a donation is completed or there are better matches found. Buehrer hopes for the latter.

On Spring Sing weekend of 2014, former Harding student James Mosley was swabbed On March 17 of this year he was contacted by DKMS as a potential match for stem cell donation.

On March 23, Mosley completed bloodwork that will confirm if he is a match for a man with leukemia.

According to a 2016 study conducted by the Health Resources and Services Administration (HRSA), over 20,000 people of all ages were in need of bone marrow transplants to combat life-threatening illnesses.

To reduce that number, the Harding College of Pharmacy organizes bone marrow drives each semester in partnership with DKMS. For more information about donating bone marrow or to find statistics on bone cancer, visit https://www.dkms.org.

Backstage and Beyond: Meet the Staff of Spring Sing