Home Features Around the World with a Needle and Thread 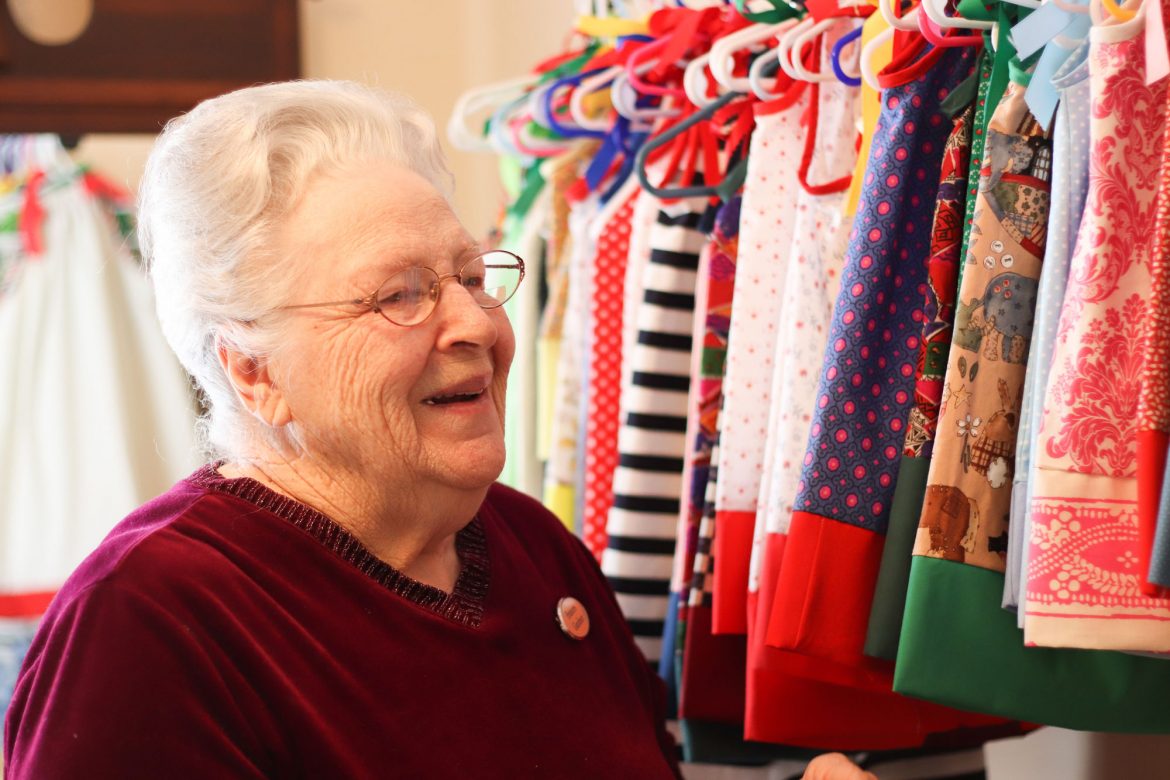 Frances Gardner, age 86, is legally blind, but that has not stopped her from using her sewing talents to better the world.

She has lived at Harding Place, a retirement home in Searcy, for five years and with the help of her friends has sewn over 300 pillowcase dresses and pants for children across the globe.

Gardner grew up in Kennett, Missouri, where she began learning to sew from her mother at the age of 8. During that time, she made her own doll clothes. Later, in her adulthood, she ran her own sewing business.

Gardner was looking for a way to use the “worlds of fabric” she had acquired when her daughter-in-law found a simple pattern for girls’ dresses that Gardner could sew with her limited vision.

After she began making the dresses and distributing them to members of her family and her church, another blind resident told her she felt restless and that she could not do anything.

“I am legally blind myself, but I sewed a lot in my life, and she said, ‘I can’t do anything but hold my hands.’ So I said ‘Would you like to help me?’” Gardner said.

Almost 10 Harding Place residents have worked together to create children’s dresses and pants to be sent with missionaries around the world.

Each resident who volunteers with Gardner has a role, whether it be picking out patterns, cutting fabrics, tying ribbons or balancing the books. Gardner does the serging on her kitchen table, which is used more for sewing than eating.

“It’s like an assembly line that doesn’t meet,” Gardner said. “All in all everyone does their little part … we just have a lot of fun. I could not have done it myself because of my eyesight. People volunteering has enabled us to be able to put out more than 300 dresses, maybe more than that.”

Though Gardner cannot see colors like she used to, racks of their bright linen pants and dresses with whimsical prints have created a pastel mosaic covering her guest bedroom.

Gardner and her family worked as missionaries in Africa and India, and Gardner said she is happy to combine her passion for missions and sewing by making clothes that will reach children in India, Nigeria, Ghana, Rhodesia, Ukraine and parts of the U.S. that have been affected by flooding.

Not only do children benefit from Gardner’s work, but the residents at Harding Place and members of the community share in her passion.

Gardner has received donations of fabric, ribbons and, recently, a sewing machine. Harding Place has shown its support by organizing donations and paying postage.

“One reason I go ahead and take what people have donated is because I can create such a variety,” Gardner said. “It just doesn’t stop.”

While her talent and passion can be seen around the world, she gets the most gratification at home, from the residents.

“They thank me over and over again. They say ‘I need something to do with my hands so let me have some more,’ Gardner said. “So they really love doing it.”