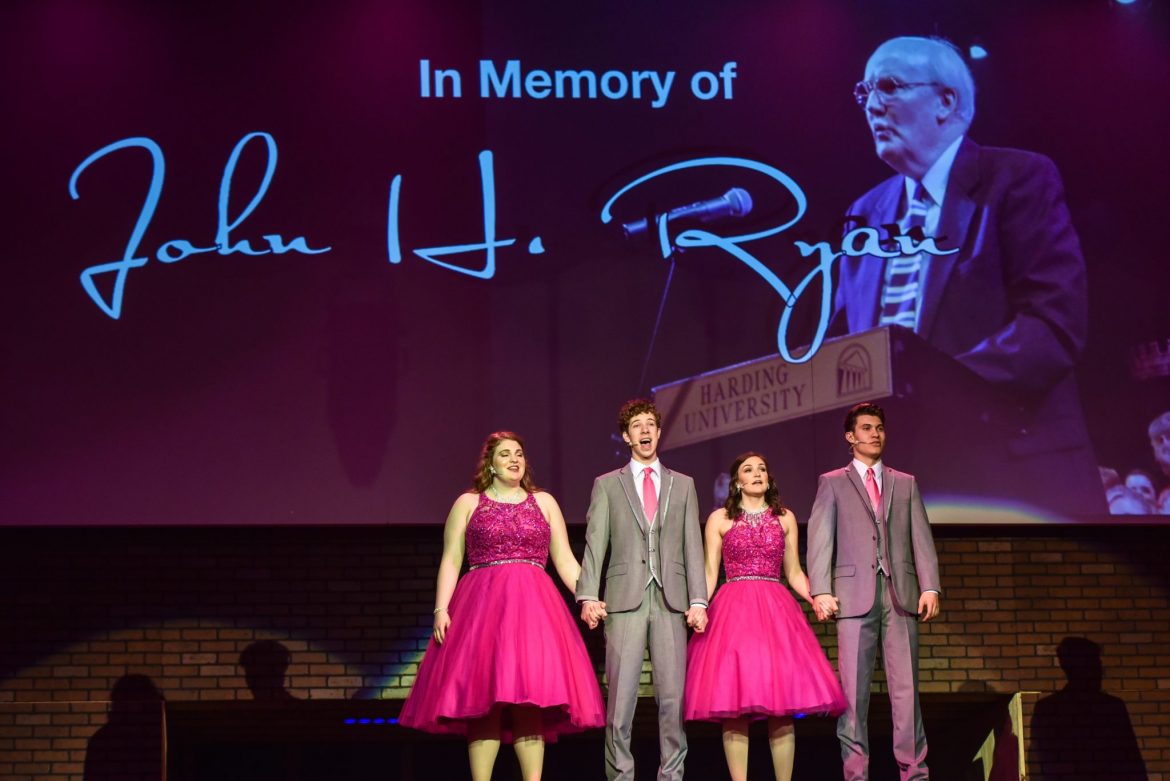 Dr. Steven Frye, director of Spring Sing and chair of the Department of Theatre, said it was one of the best-kept secrets of all time. When he decided to rename the Spring Sing sweepstakes award in 1998, he only told two or three people.

Frye organized a presentation during Spring Sing’s 25th award ceremony for the sweepstakes award to be dedicated to Dr. John H. Ryan (Jack), who was retiring that year. Former Harding president and current chancellor, Dr. David Burks read a certificate of thanks for Ryan’s 25 years of dedication. Afterward, Frye announced the renaming.

“Dr. Ryan was almost in tears, because he was a fairly formal man, so that idea of proclamation from the board (of trustees) was a huge deal for him,” Frye said. “He put his hands together … it was one of the first times I caught him speechless. He always had something to say, and he was just stuck.”

Dr. Ryan was a professor of communication at Harding for 34 years and, until he stepped down in 1993 to return to full-time teaching, was chair of the Department of Communication for six of those years. Before his death on March 12, 2018, Dr. Ryan was an active member at College Church of Christ and an avid piano player.

In 1974, after being approached by two students who wanted to start a Harding Spring Sing show, and then agreeing to sponsor and produce it, Dr. Ryan became known as “Mr. Spring Sing.”

According to one of Dr. Ryan’s former colleagues, Dr. Jack Shock, distinguished professor of communication, Dr. Ryan was willing to listen to students and wanted to help them succeed.

“That is what I will remember about Jack, that the idea (of Spring Sing) came from students,” Shock said. “He nurtured the students and was able to recognize a good idea when he saw one. (Spring Sing) wasn’t his idea, it was a student’s idea, and so he listened. I think that is an admirable quality that I’ve always tried to imitate.”

Dr. Ryan served as Spring Sing producer until the 2005 performance. In addition to Spring Sing, Dr. Ryan was a master of communication. He ran a weekly radio show on Harding’s radio station KVHU and earned the title “The Voice of Harding.” Dr. Pat Garner, professor of speech and former student of Dr. Ryan’s, said he was notable for oral interpretation and enjoyed having classes with him.

“He was so inspirational,” Garner said. “I’ll miss him. I have missed him because he has been retired for some years. I think his real love was in teaching, in reading Scripture, and then, of course, he took (on) Spring Sing.”

Garner described Dr. Ryan as “pontifical,” pope-like, and said Dr. Ryan would stay after class with him as he finished his discussion-based exams. It was subtle gestures of kindness like these that made Dr. Ryan an influential man for the people around him.

Lori Sloan, assistant professor of marketing, grew up as Dr. Ryan’s next-door neighbor. Sloan’s parents, Neale and Treva Pryor, were neighbors and friends of Dr. Ryan and his wife, Marjorie, for more than 50 years.

“What I remember about Jack Ryan, especially after my dad passed, is he was very sweet to bring my mom’s paper to the doorstep when he was out walking in the morning, or to bring her trashcan back up from the curb,” Sloan said. “Just the easy touches that help you get through your day … that kind of thing.”

When Sloan and her family returned to Searcy in 2004 after living in Little Rock, they bought a house down the street from the Ryans’ and her childhood home. She and Dr. Ryan were reunited as neighbors for 14 years.

“He made a point to always drive by,” Sloan said. “He would roll the window down and tell me another funny joke and then would almost always have something positive to say. Whether it be ‘I’m really impressed with your son and how he knows how to introduce himself and shake hands,’ or ‘I’m really proud of (your daughter) for making straight A’s.’ He was always an encourager.”

Frye said when he and his family first moved to Searcy, Dr. Ryan was instantly a helpful neighbor.

“This will always be a favorite memory: when we moved to Searcy, as we pulled the moving van into our new house driveway, standing in the driveway ready to help us unload was Jack Ryan,” Frye said. “In a community I had never lived in before, we didn’t know anybody, he was the welcoming voice.”

Although he was described as a formal man, Dr. Ryan was known for cracking jokes. Frye said Dr. Ryan had a joke for every day of the week.

“I still always remember his laugh,” Frye said. “It was always a burst of laughter that brought joy. He would tell a joke and then laugh at it, and sometimes he would tell the same joke three times in three days, but it was still funny every single time.”

Frye was hired by Dr. Ryan in 1989 after serving as a guest Spring Sing judge in 1987. Like Shock, Frye said he learned about working in a college environment through Dr. Ryan.

“(Dr. Ryan) mentored me as a young professor,” Frye said. “He challenged me to not be so adamant about things, to be more diplomatic in solving problems, to look for solutions rather than confrontation. … I think I’ve benefited because he showed me a lot of things, not just in the classroom but out of the classroom.”

Because several faculty members were students of Dr. Ryan, Frye said his legacy continues through them.

“Harding University was blessed to have his presence on this campus and I think his legacy lives on in so many people,” Frye said. “He taught … nearly everyone in the communication department –– he was their teacher and then their legacy. That is a tremendous legacy that is paying benefits for thousands that directly had him for class and tens of thousands that had his influence to others.”

There will be a special tribute to Dr. Ryan after the show each night. A rededication of the award will take place during the award show tomorrow night, after the final performance.

Just the Clax | The Family Hub