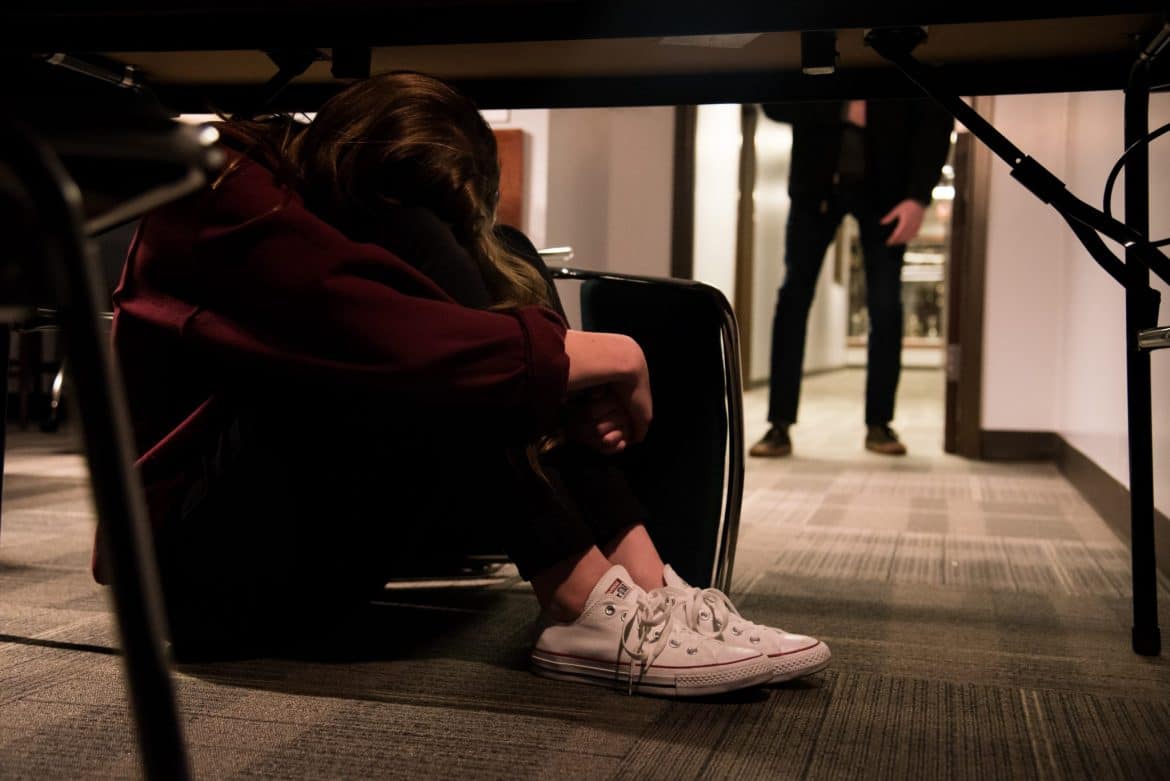 We were running through blood

It was the Friday before finals week in the December of 2013. Junior Lauren Burcham, then a high school junior, was a sitting in her Spanish class at Arapahoe High School in Centennial, Colorado. The student who normally sat next to her had been suspended after an outburst in class a few days prior.

Several minutes into class, gunfire rang through the school.

“He had entered the school and had a list on his arm of people that he was planning to kill,” Burcham said. “You could hear it all. You knew it was close. In that moment, I remember hearing the first shot; and by the second shot, I was in the corner hiding, huddling.”

The shooter killed one of Burcham’s friends before entering the hallway. Burcham said her friend had asked what the shooter was doing, so he shot her in the head. He continued to the library, near Burcham’s Spanish class.

Once there, he set fire to the library, setting off the fire alarm. The shooter was found dead in a classroom with an apparent self-inflicted wound, according to the Denver Post.

Huddled in the classroom, the students anxiously used their phones to search for news updates. They waited. They listened. Some of them prayed.

“We were trying to piece it together while we were on the inside, and that was really scary because, obviously, different news outlets were getting different information,” Burcham said. “It was overwhelming to hear the footsteps in the hall, to not know if they were coming for us or trying to save us. That was a really hard time — a time where I definitely thought I was going to die. I was certain. I was right in view of the glass on the door. Had he come to the classroom, he would’ve seen me. He would’ve made eye contact with me. I thought that was it.”

Burcham said her classroom remained on lockdown for approximately 45 minutes, while other classrooms were held for twice as long. She said a SWAT team banged on the classroom door with guns and commanded everyone to raise their hands above their heads.

“(The SWAT teams) cleared the room, and at that point, you just run,” Burcham said. “We were running through blood … They didn’t really have a system, so we just had to run. I ended up in a supermarket, and they were telling us to all go to the back. I didn’t want to be enclosed anymore. I felt like I needed to be out, where I could see everything and be in charge of myself. I ran out of there, and at that point, I was looking for my parents, looking for anyone I knew.  . . . I didn’t have my phone or computer or anything. It was just me, running.”

I get uneasy sometimes

Since coming to Harding after her experience at Arapahoe High School, Burcham has repeatedly chosen an aisle seat in chapel, and she continuously finds herself searching for escape routes in her classrooms. Burcham said her business professor, Dr. Randy McLeod, addressed her class with proposed solutions for acting upon an active shooter situation after a recent faculty meeting, in which Director of Public Safety Craig Russell discussed active shooter preparedness. McLeod said he would be keeping one of the two doors locked while students where in the room.

Nathan Henton, associate professor of English, said he is surprised that Harding has not done more to prepare for an active shooter situation, considering the number of mass murders that have occurred even within the last year.

“They’re not common … (but) they’re happening often enough that we should talk about them,” Henton said. “I’m troubled that I even have to think in these terms. But I do because preserving the lives of my students is a huge deal for me. I recognize that, statistically, (a school shooting) is not likely to happen, but it does happen. I don’t want to get caught in that moment without having a plan.”

Henton explained that there is not anything an educational institution can do to prevent the existence of mass shooters, but they can know how to respond to a situation, were one to arise. Henton said he thinks about the situation daily and described what he would do in the event of an active shooter situation.

“First of all … I always keep the doors locked. I have worked out, in the classrooms in the buildings where I teach … that there’s one place in the classroom where I could gather all my students, because of the angles of shooting, that would most likely be out of the line of fire. My plan, for several years now, has been, if you hear a noise in the hall, say to some students: ‘You, you and you: grab some desks and barricade the doors.’ Then we pile ourselves in the middle.”

He emphasized that it is his responsibility to do whatever he can to make sure every single student gets out alive. He also explained that this is informed by his belief system.

“If the message of Christ is, in part, ‘Hurt me, not them,’ how could I do any less? … My obligation at that point would be to step in front.”

I know I stand for safe schools

According to a survey conducted by The Bison on March 16, 75 percent of the 179 respondents said they did not know what to do in an active shooter situation; 78 percent said they have not been aware of any procedures through or while at Harding.

Senior Dakota Ellis, Student Association (SA) president, said he was contacted by students with safety concerns following the Parkland shooting. He has been working with Public Safety to plan a brief presentation about active shooter preparedness on Monday, March 26 in chapel.

According to Russell, Harding has a holistic approach including two armed officers and various avenues for safety. Jana Rucker, vice president of communications and marketing and enrollment, said Public Safety officers are also intentional in helping prevent danger to students.

“By virtue of being a Christian school, the Christian environment, we are always on the lookout for people who need help,” Rucker said. “I think we are always in tune with that because we care about students and we love students, so we have good resources so that we can assess when people are struggling, that we can provide help.”

Public Safety advocates the “run, hide or fight” approach as the campus response to an active shooter, which is explained through a video at the mandatory safety meeting students must attend during their first semester at Harding. In an active shooter situation, a student who is able should first try to run, then hide, then, if necessary, do whatever it takes to fight for their life.

“The reason we utilize the ‘run, hide, fight’ approach is that it does not rely on a perfect scenario to keep you safe,” Russell said. “Rather it relies on people making the best choices they can regardless of the situation.”

The Department of Public Safety routinely trains for active-shooter related situations on campus. Officers frequently trained in the Benson Auditorium, partially because of its role as the location of chapel, according to Russell. At least two armed officers are stationed in the Benson, and soon after chapel begins, the side doors are locked.

According to Rucker, the university has distributed the “run, hide, fight” training to faculty and staff, which they are encouraged to complete. Russell said further active shooter response preparation has included individualized training sessions for departments on campus, active shooter preparedness training courses for students and an active threat assessment team that monitors potential threats to campus.

“It’s time to make a difference,” Burcham said. “The time is now — it was three years ago, it was 20 years ago at Columbine. We are letting too many people die. I mean, that’s the simple fact. I don’t know where I stand on gun control, but I know stand for some safe schools.”

Russell will present opportunities to learn about shooter safety in chapel on Monday, March 26. Active shooter training courses for students can be found at harding.edu/public-safety/classes-offered.