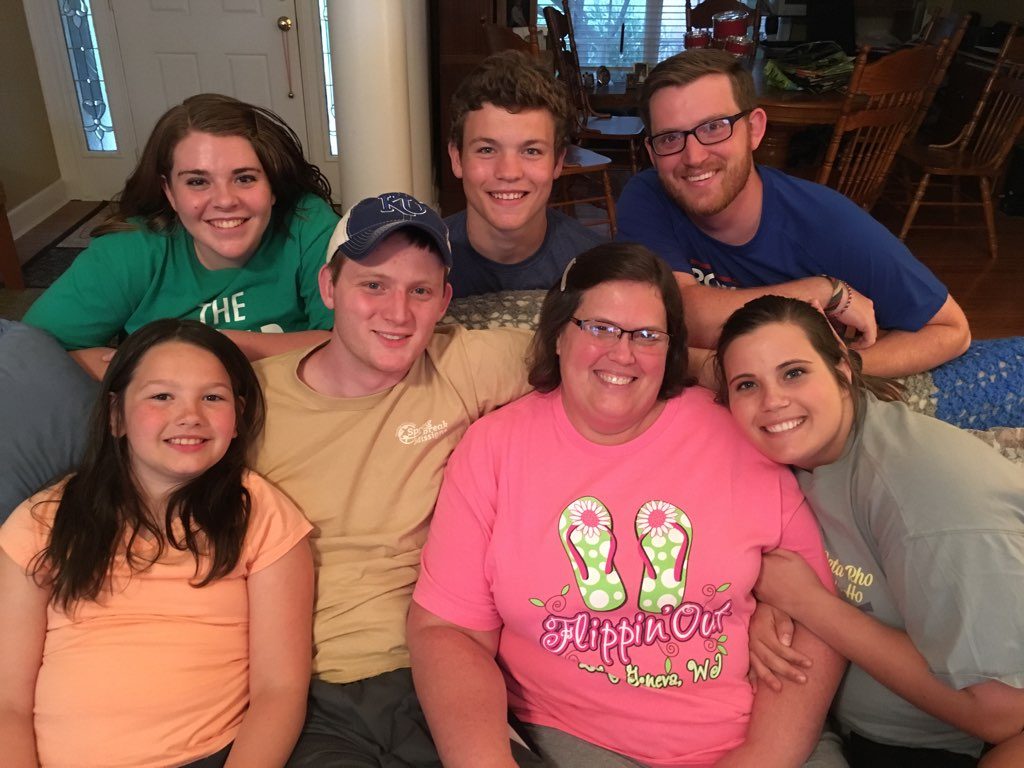 Assistant vice president of Finance Tammy Hall poses with her family in May of 2016. Row 1: Rebecca, Jacob, Tammy, and Hannah. Row 2: Rachel, Nathan, and Caleb. Photo Courtesy of Tammy Hall

“When I hear the word adoption, I think of the word ‘grafted.’ Kind of like a tree, you’re putting on another branch, essentially,” alumnus Kurtis Laughlin said.

Grafting was what Laughlin felt his family did for him when he was adopted by his foster family in 2016.

“(My adoption) is probably not your stereotypical one,” Laughlin said. “I went into foster care at age 12 and was adopted at 22. I aged out of the system at 18. … My family wanted to continue working with me, but getting adopted for me would have made me lose certain scholarship opportunities. They waited until I had finished college to adopt me.”

Laughlin said that even though he already felt like a part of the family, after living with the Laughlins for 10 years, the adoption had special meaning because it made that feeling a reality.

According to Laughlin, his adoption also brought him a sense of belonging.

“It took me a long time to get comfortable in my skin,” Laughlin said. “Not feeling accepted by my original family and then moving onto the next family made a gray area. Adoption to me meant a little bit more acceptance and a little bit more peace.”

For junior Hannah Hall, who has two siblings adopted from foster care, this sense of peace and belonging is the essence of adoption.

“Everyone needs people that they can call family, even if they feel like they already have that,” Hannah Hall said. “They still need people to show them the love that they might not have had before. I think that’s the most important part.”

According to Hannah Hall’s mother, Assistant Vice President of Finance Tammy Hall, the Halls have fostered 75 children in the last 11 years.

“Nate and Rebecca came to us as foster children five days after we became foster parents,” Tammy Hall said.  “At that time, we had no thought of adopting them.  We were brand new to the foster care system and assumed … they would go home in a few weeks. Fast forward 14 months (and their) birth mom’s rights were terminated. … We quickly came to the conclusion that they were a perfect fit for our family and we didn’t want them to have to go through losing a second set of parents after we had filled that role for over a year.”

As seamless as she felt the transition was, Hannah Hall said one of the most difficult parts for her is knowing her siblings have a biological family somewhere.

“Even though they live with us and we chose them, they’re still going to have thoughts and wonder about what life would be like if they were still with their (biological) families,” Hannah Hall said.

This is a struggle that Tammy Hall said she also faced, adding there are a lot of emotions that both the foster child, and foster parents must work through.

“Some of them, supported by their parents, resent you as foster parents,” Tammy Hall said. “Some love you, and some feel guilty because they like the consistency, security and love they get in foster care and that makes them feel like they are being untrue to their parents. … As an adoptive parent, some of the hardest things are trying to understand the bond and the defense the kids feel for their birth mothers.”

According to chairman of the Department of Behavioral Science Terry Smith, who adopted his foster son Jonathan, this is the struggle of foster care in general.

“You have to remember that you’re a surrogate parent,” Smith said. “There is someone else who is really family to that child, and you have to be committed to the fact that that’s where they ultimately belong. Everybody deserves that.”

However, that original family is not always a safe place for the child, Smith said.

“When that system isn’t functioning in a way that would be in the best interest of that child, and it becomes apparent that parent rights are ending, that’s when (foster parents) say, ‘If anyone deserves a chance to adopt this child, it should be us,’” Smith said.

Although adoption from foster care means a child won’t return to their birth parents, Tammy Hall said it creates an opportunity for a family to show a child what it means to have stability.

“We are not perfect by any means. But we model how a family loves, interacts and fights, but never resorts to physical abuse, and ultimately stays together,”  Tammy Hall said. “Most of these kids have never known anyone that has only been married once and is still married 20 or 30 years later. They have never seen Jesus or been to church. … They have never been taught respect for authority. … Our family may be the only chance these kids ever have to see Jesus.”

Laughlin echoed these thoughts but also posed a question for Christians: who better to foster and adopt these children than believers?