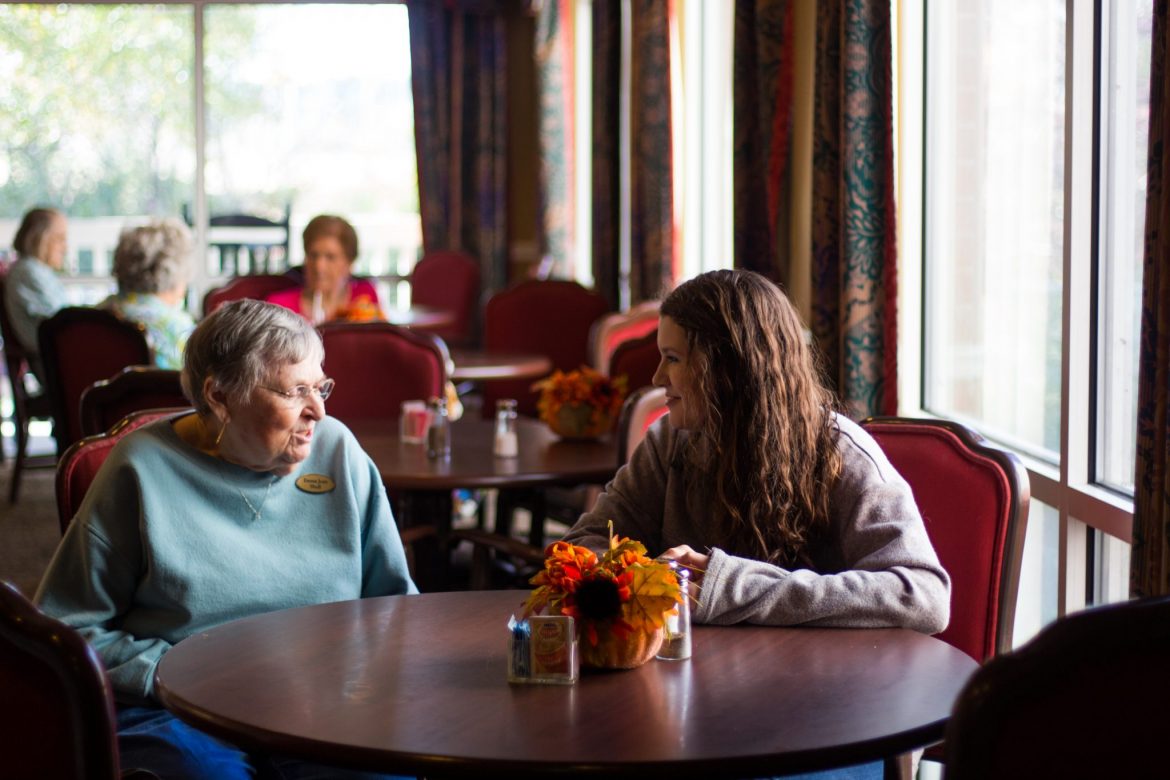 Peggy Robertson lives at Integrity Residential Care in Searcy. She keeps a visor’s logbook in her room to help with her memory when she prays for the people who have visited her. Her book laid untouched for 5 years.

Senior Jake Black learned about Robertson from a member at Downtown Church of Christ. Black said he drove by Integrity Residential Care on his way to school each day and felt pulled to help fill out Robertson’s book again.

“Jesus emphasized relationship,” Black said. “He didn’t just see people, but Jesus went out of his way to know people.”

Black met Robertson in October. Robertson asked why Black would come visit and initially encouraged him to visit others whom she thought were more deserving of company. He began visiting regularly.

“I just can’t stop thanking them every time they come,” Robertson said. “I see so much of Christ in them and they have made my days better and have helped my relationship with God.”

Now, a few more entries have been added and Robertson she could not be more appreciative.

“I’ve been so blessed by the family that is able to come visit me every so often and I have been so blessed by the relationships I have made here in my home, but it was an even greater blessing to visit with Jake and his friends,” Robertson said. “It’s not often we get to meet new people, for I really can’t go out, so it has been a pleasure to see their smiling faces walk through our door every week all for the intention to visit with us.”

Black said he has enjoyed his experiences with the residents of the care center. They have shared stories, wisdom, laughter and love.

“They have blessed me more than I could ever bless them,” Black said. “I have felt the power of relationship and the power of being known by other people. The feeling that one receives from being known is incredible, and I think that is why Jesus was so specific about names in his ministry.”

Sophomores Abigail Mullins and Caroline Dearman both initially started visiting with local senior citizens to gain observation hours for their major’s program, but both immediately fell in love with talking, doing service projects, and playing games with the people at the Harding Place Retirement Center.

“I now see a ministering opportunity that may be overlooked.” Mullins said. “Ministering to the elderly isn’t always having an in-depth Bible study, but often times it is just showing the love of Christ that society may pass by. By sharing time with them I believe we give them hope and their gratitude is beyond our understanding.”

Everyone needs an outlet to express happiness and be with others, according to Dearman.

“The first day I went, I played a game with five sweet older ladies,” Dearman said. “Their joy radiated throughout the room, and it was contagious. We laughed and talked, and I left that day in such a cheerful mood.”

Mullins has also experienced the joyful power the atmosphere brings, as well as a newfound appreciation.

“Visiting with the elderly just really helps me to stop and slow down for a second and appreciate the small things in life because small things to us may be big things to them,” Mullins said. “They all have such wisdom and never shy away from sharing it.”

According to Dearman, every time she visits she learns so much and enjoys sharing her time with them, regardless of what they are doing.

“One of my most favorite memories shared with this community was when I went to a nursing home for a singing service that College Church of Christ hosted,” Dearman said. “It was one of the best singing services I’ve ever been apart of, they can really sing. God’s presence was clearly in the room.”

Senior Adam Gomez, member of the Harding’s Men’s Bible Study, has been attending Sandhill Church of Christ in Newport, Arkansas for the past three semesters. There he ministers to a congregation of senior citizens alongside other members of the Men’s Bible Study.

“It was a powerful Sunday morning,” Gomez said. “Many of those older folks were crying for joy and because we saw how impactful that moment was, we plan on trying to break that record in the spring of 2018.”

Gomez expressed that the people of Sandhill rarely have people under the age of 30 visit their congregation. That is why in 2005 the Men’s Bible Study committed one Sunday every month to joining with this congregation and ministering to them.

“We get to rejuvenate their spirits,” Gomez said. “Even though these people grew up in a different culture, they still thirst to be a part of a community that makes their life meaningful.”