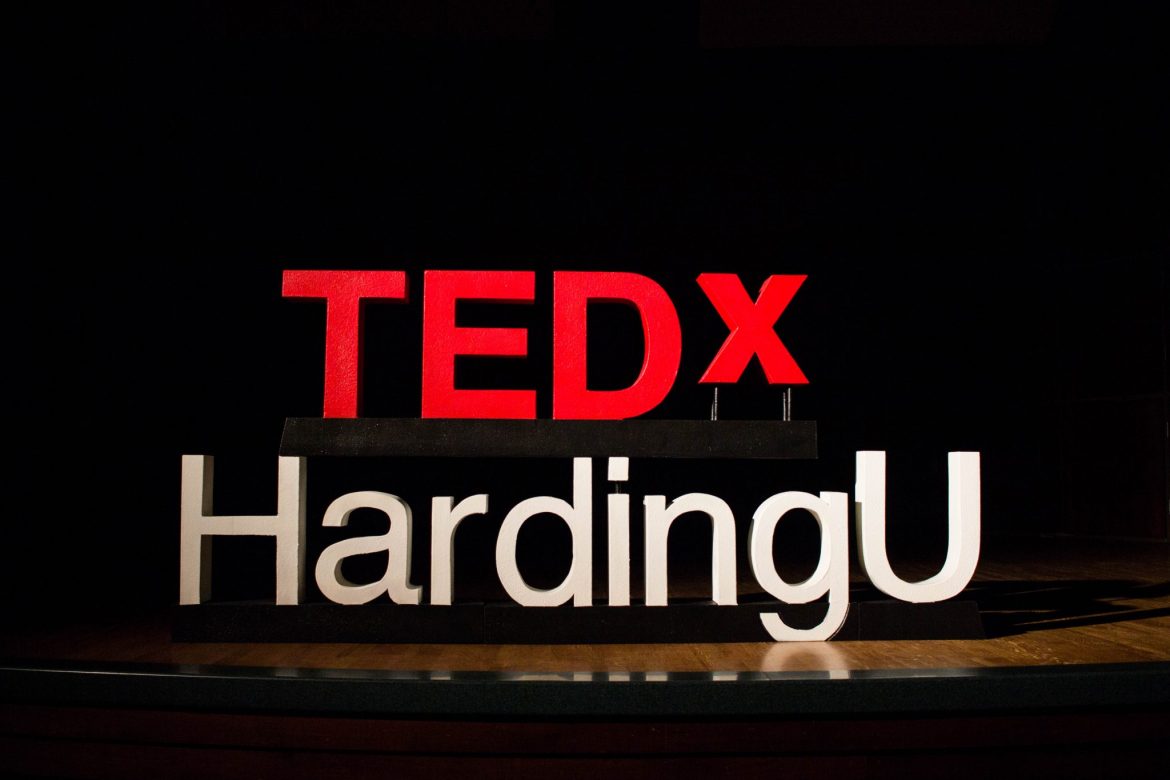 Harding hosted its first annual Technology, Entertainment and Design (TED) conference on Tuesday, Nov. 14, for an audience of nearly 220. The event was organized by Dean of the Honors College, Dr. Mike James and was officially licensed by TEDx, TED’s independent license, as TEDxHardingU. The event featured seven speakers, several of whom were Harding alumni, and one student speaker. Each speaker was allotted 18 minutes or fewer to discuss their chosen topic built around the event’s theme of “A Vision for the Vulnerable.”

President McLarty began the evening with a welcome to faculty and students before introducing the first speaker, investigative reporter and 1982 Harding alumnus Jerry Mitchell. Mitchell’s topic was “The Gift of Living Fearlessly,” and he discussed his career as a reporter and his role in the reopening of several Civil Rights cold cases, including that of the assassination of Civil Rights activist Medgar Evers. Mitchell told the audience that he has faced numerous death threats during his career, but that he learned to see past the fear of death and focus on the reconciliation made possible by his work.

“Living fearlessly is not living without fear, it’s living beyond fear,” Mitchell said during his speech.

Mitchell’s talk was followed by a presentation from Phyllis Bell, child welfare senior advisor and intern director to Arkansas Governor Asa Hutchinson. Bell’s discussion, titled “Life Is the Sum of Our Choices,” used audience participation and the metaphor of a home-builder to discuss her troubled upbringing and her resolve to follow her dreams, build her own future and not to carry baggage placed on her by others. Throughout her presentation, Bell emphasized the power of personal choice in forming one’s life and building one’s future. Bell credited her resolve in decision-making to a promise made to her brother not to allow others to grow up in the same hardships which they faced in their childhood.

“You can choose to be the architect of your future,” Bell said. “What are you doing — or what are you not doing — that you want to do? Are you living life to fullest?”

During the second half of the event, Dean of the College of Bible and Ministry, Dr. Monte Cox spoke on the topic “On Time,” focusing on cultural perceptions of time, timeliness and the importance of emphasizing meaningful moments above the sequential passage of time. Cox noted that Greek language uses two words to discuss the passage of time: chronos, which refers to chronology, and kairos, which refers to qualitative moments. Cox encouraged the audience to use kairos to “build Sabbath into the rhythms of life,” especially when considering relationships.

“Depth takes time,” Cox said. “I do not want to sit idly by and let the clock run out. I don’t want to slip into autopilot and let time slip by. I refuse to let the chronos beat out the kairos.”

Senior Raneisha Stassin, the evening’s only student speaker, discussed her upbringing in poverty within an abusive household. Under the topic “A Little Help,” Stassin discussed her hardships and the people in her life who she credits with lifting her to her present success and happiness.

“Stability was abnormal to me,” Stassin said of her upbringing during her speech. “I was used to dysfunction and brokenness.”

Stassin, who will begin her career in public relations after graduating in December 2017, considers her success to be a product of the selflessness of those who offered help when she was in need, and encouraged the audience to see the potential to help others to succeed as well.

“Many people working together can create something incredible, and (they) often do,” Stassin said. “You may not realize it now, but you are part of someone’s success story.”