Home Features Using Stories from the Past to Change the Future

Using Stories from the Past to Change the Future 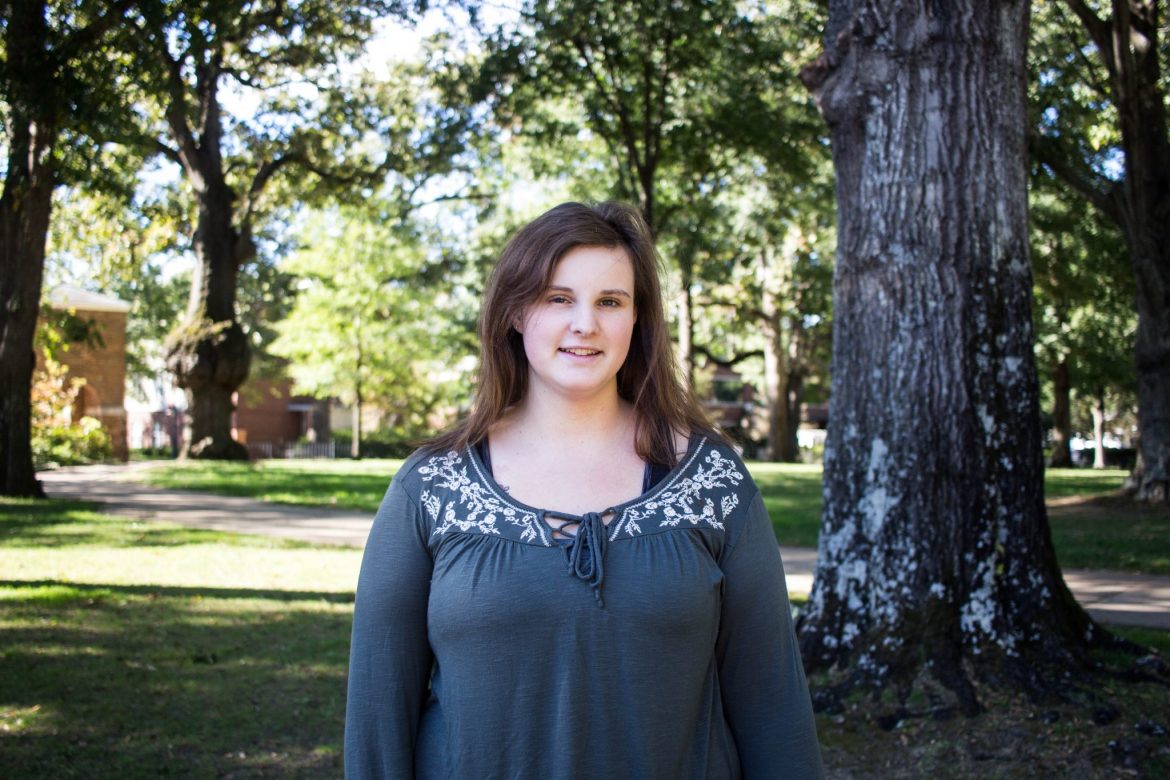 Junior Samantha Allen is a survivor of lymphoblastic leukemia. She was diagnosed when she was 9 and is now considered cancer free. Photo by Macy Pate

Junior Samantha Allen was sitting in her third-grade classroom when she was called to the school’s office. When she arrived in the office, her mother was there, prepared to take her to the hospital. e doctor had just called, and Allen’s blood work had tested positive for cancer.

“I was 9; I didn’t know what was going on,” Allen said. “It was a very long day … I knew (the doctor) was discussing something with my parents — it was very serious. But later that night I got brought to an in-patient room, and I didn’t really know what was going on. at’s when they told us the final diagnosis.”

“I didn’t know exactly what it was because I didn’t really know what cancer was,” Allen said. “I knew it was something bad, and then I had to spend like a whole week in the hospital for them to kind of analyze the situation and gure out the treatment they needed to give me.” Allen underwent chemotherapy and radiation for approximately one year before entering remission. She had both in-patient and out-patient treatments and continued to attend school, though she said she felt uncomfortable.

“It was hard because I definitely became a lot more self-conscious about myself because I (was) a bald 9-year-old and the steroids I was on made my cheeks look really fat,” Allen said. “It was just di cult going to school looking like I did and feeling weak … basically you’re in a really vulnerable state.”

More than 40,000 children undergo treatment for cancer each year, and there are approximately 375,000 adult survivors of childhood cancers in the U.S., according to CureSearch Along with Allen, juniors Hannah Mosher and Cooper Mosely are two of the thousands who have survived childhood cancer. 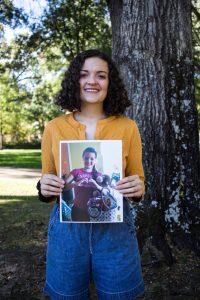 Junior Hannah Mosher holds a photo of herself from when she battled thyroid cancer in high school.

Mosher found a lump one her neck while she was sitting in her ninth-grade history class. She later learned she had papillary thyroid cancer and underwent surgery to remove her thyroid and lymph nodes.

“It just kind of appeared one day, this lump on my lymph node,” Mosher said. “I was very scared, especially to go into surgery.”

Mosher feared being put under anesthesia and never waking up from the surgery, but she said the worst part of treatment was the low-iodine diet she was required to eat for her radiation. During the summer, Mosher learned two small cancerous nodes remain in her lungs, but is thankful that they do not warrant medical treatment.

“Honestly, I was grateful that I kind of got this form of cancer over another form just because it’s much more treatable compared to something like leukemia or a variety of other cancers out here,” Mosher said. “I kind of consider myself fortunate, and I don’t really think about it that much. It’s just kind of something that happened in my body. I don’t feel sorry for myself or anything.”

A double cancer survivor, Mosely was diagnosed with Hodgkin lymphoma at age 10, which reoccurred at 13. He said the second diagnosis was more disheartening than nerve-wracking because he was aware of the difficult road ahead.

“(At 13), I understood a lot more than I did the first time, so I was more prepared, but I was not as scared because I knew it was going to happen,” Mosely said.

Mosely said he was rst diagnosed with stage 2A cancer on Valentines Day in 2008. He entered remission after six cycles of chemotherapy and radiation. In 2010, he discovered the cancer had returned at the more severe 4B stage. 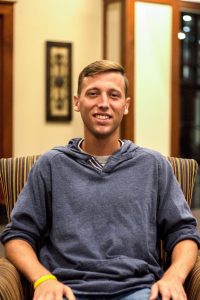 Junior Cooper Mosely is a two-time survivor of Hodgkin lymphoma. He is now considered cancer free.

“I just knew I had to get through it because if I don’t fight, I die, so you only have that ( fighting) mindset when you go in,” Mosely said. “Fighting for your life is something extremely hard to describe because we don’t know anything besides our life. Death is basically irrelevant to us right now.”

Mosely had to stay in in-patient care for 22 days. His fondest mem- ories are of befriending other child patients and friends visiting him.

“Personally, my point of view as a cancer survivor, even when you’re going through treatment: you don’t want to be treated differently,” Mosely said. “We don’t want people bending over backwards for us to do something. We want to do stuff on our own and feel good about ourselves.”

Mosher and Allen have both chosen majors with hopes to help others who are diagnosed with cancer. Mosher, a biology major, plans to become a physician’s assistant; and Allen, a child life major, wants to work in the eld of pediatric oncology.

“I want to bring joy and hope to kids who are in a similar situation, or even in a worse situation, and just let them know there is hope,” Allen said. ”You can survive (and) there is a possibility to survive. Even if they say you only have so long to live, I want to help them make the best they can out of what they have left.”

Harding Community Gathers to Raise Money and Awareness for Cancer