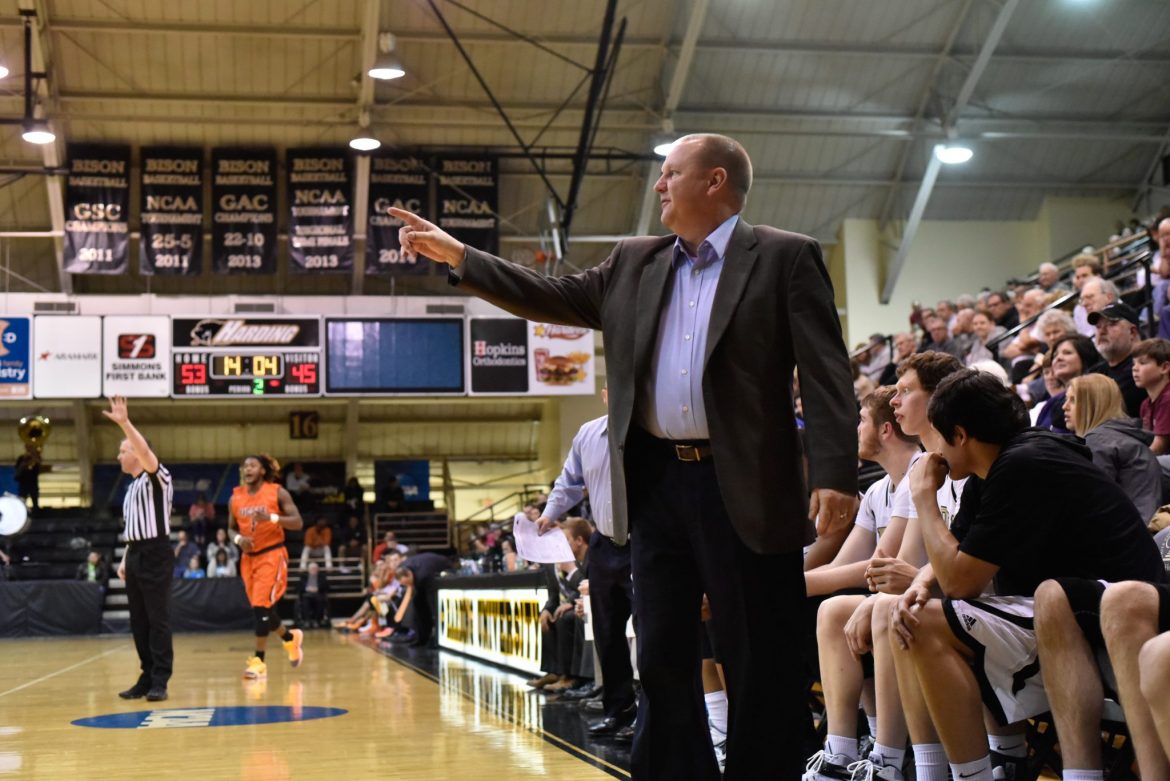 In high school, Jeff Morgan had one dream: to play college basketball at Harding University. Although he never played for Harding, Morgan’s dream came true in a different way.

Morgan attended York College in York, Nebraska, and played basketball for two years before transferring to West Texas A&M in Canyon, Texas, to finish his playing career. Morgan said he realized he wanted to coach during his junior year at West Texas and spent his first four years out of college as a graduate assistant and assistant coach. He worked under Mark Adams, head coach at West Texas, and took over as head coach after Adams took a Division I coaching job.

Morgan was 26 in his first year as head coach, the youngest coach in all of college basketball. He led the Buffs to a 17-10 record. However, that changed after Morgan heard about a job opening in Searcy, Arkansas.

“After the season ended, the head coaching job was open here, and I thought Harding would be a great place to work,” Morgan said. “I basically grew up around the campus with my older sisters and brother going here.”

In 1993, Morgan was named head coach of the men’s basketball team. Morgan was just the fourth head coach since basketball restarted at Harding in 1957. Morgan said he wanted to make a big change in his first year with the Bisons.

“Our mindset from day one was to change the culture,” Morgan said. “If you look back through the 37 years of basketball at Harding leading up to the year I joined, Harding only had eight winning seasons and never won more than 20 games. We wanted to change the mindset that we could compete and win conference championships and NCAA tournaments.”

Twenty five years later, Morgan has met his goals and then some.

Morgan has led the Bisons to 21 winning seasons and six 20-win seasons. It only took two seasons to bring Harding its first 20-win season when the Bisons finished 22-10 in 1994 to 1995. Morgan currently holds a 412-275 record at Harding and ranks fourth among coaches at Arkansas colleges. He said his years coaching before Harding were valuable to his success.

“I got to be around some great coaches in high school and college,” Morgan said. “Working for coach Adams was a great experience because he always gave his assistants unbelievable responsibility. He had us doing a lot of coaching and preparation for games. In my last year, I made the practice plans every day, and he’d change some things and go.”

Tim Kirby, head coach of the women’s basketball team, spent his first 12 years at Harding as Morgan’s assistant coach. Kirby said that doing the right things as a coach has kept Morgan at Harding over the years.

“He’s a good Christian man, and the way he does things is what he does best,” Kirby said. “I think his consistency has been one of the big things that has taken place at Harding. You don’t stay places for 25 years if you’re not consistent with how you do things.”

Morgan has led the Bisons to 20 postseason tournament appearances and four regular season championships. He has coached more games and has more wins than any other Bisons men’s basketball coach. Through all the success, Morgan said his happiest moments have revolved around his players.

“Looking back on it, the happiest times are the things you see the athletes accomplish and the changes that occur in them,” Morgan said. “You can go through the years and really see a change in guys and their growth spiritually in their commitments to be followers of Christ. It’s so awesome to be a part of it.”

Athletic Director Greg Harnden was the women’s head basketball coach when Morgan came to Harding in 1993. Harnden said Morgan has delivered a lot of good to Harding on and off the court.

“He brought great public relations and notoriety to our basketball program,” Harnden said. “It’s so unusual to be at a school for 25 years as the head coach and have this kind of success. He’s been a great example for the faculty and staff along with the students.”

Morgan said he does not have an end goal in mind, but hopes that his program has made a positive impact on the Harding community.

Morgan’s 25th season kicks off on Saturday, Nov. 4 when the Bisons travel to Jonesboro, Arkansas, to face the Arkansas State Red Wolves in an exhibition match up.