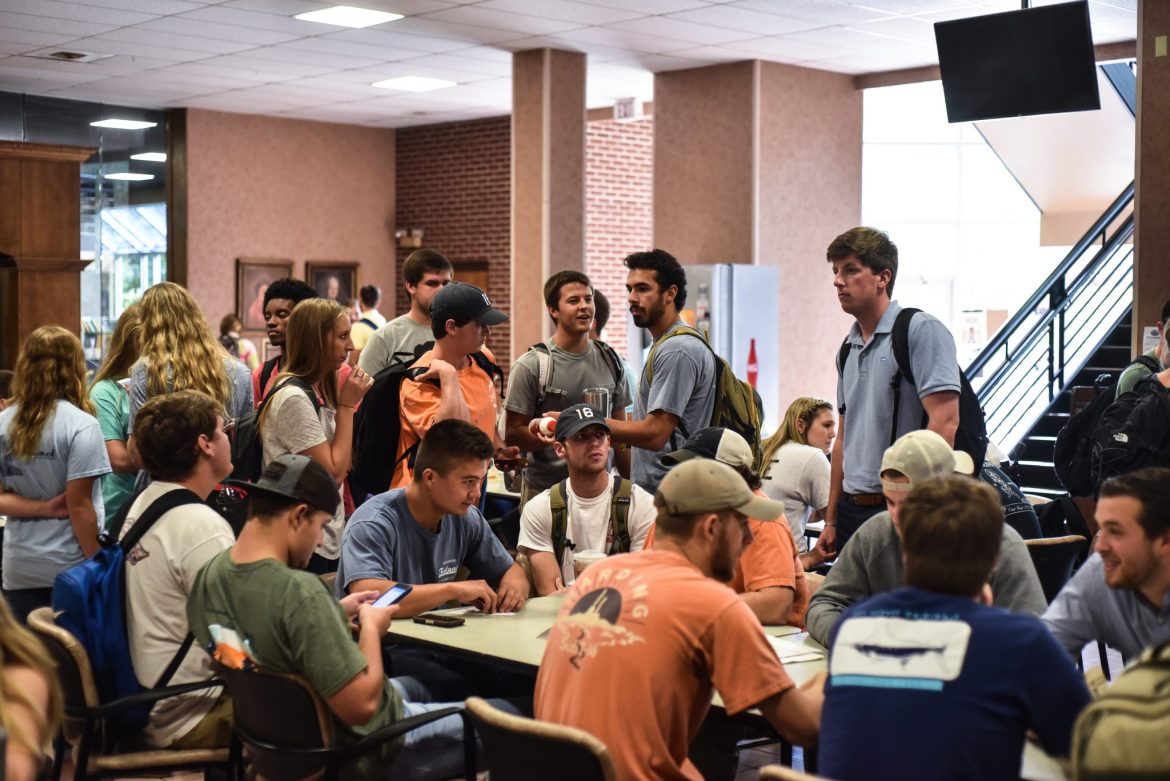 Students socializing in the Student Center. Photo by Sterling McMichael

Open dorm visitation provides opportunities every few weeks for members of the opposite sex to visit the living areas of each other’s residence halls, according to the Harding Residential life handbook.

Student Association president Dakota Ellis said that open dorm can be an excellent opportunity for students to enjoy each other’s company in a more personable environment.

“Open dorm is synonymous with an open mind and allows individuals to explore in a safe environment the living conditions of the opposite sex,” Ellis said. “So embrace it, let it be an adventure and make some memories.”

Freshman students like Dane Richey seem to be the majority of those who take advantage of open dorm, according to the office of Student Life.

“Having experienced my first open dorm night, I can now see and understand the potential benefit it holds to us students,” Richey said.

Richey said that open dorm provides more freedom to students by allowing them to fellowship with one another in the comfort of each other’s living space. It also provides a unique way to get to know people better and meet others.

Senior resident assistants (RA), Travelle McManus and Carrie Arendale said in their years of witnessing and participating in open dorm, they have seen everything from simple hang out sessions to extravagant get-togethers.

“Those that regularly take advantage of open dorm seem to take a very casual approach when choosing how to spend their time,” McManus said. “I come across people hosting game nights, dinners or Bible studies, which always seems to serve as a great stress reliever to those that partake. You really don’t always have to think outside the box to have a great time.”

Arendale said she’s surprised at the number of students who do not utilize open dorm visitations. Aside from the typical open dorm gatherings, Arendale has witnessed some creative ones.

“It’s so exciting for me to see how creative some of my classmates or residents get for open dorm,” Arendale said. “Last semester I had the privilege of witnessing a dorm formal, in which a few girls in my hall invited a large group of people to their room and they came all dressed up.”

One of last semester’s hosts of ‘open dormal,’ junior Rachel Bean, said she and her friends came up with this concept to make open dorm more enjoyable than just simply having guys come sit in their room.

“It was awesome,” Bean said. “We sent out invitations and told everyone to come dressed in their formal attire with a potluck dish in hand. We did all we could to make open dorm seem like a very classy event, in which we even had a Cheetos taste test.

Throughout the night, according to Bean, more and more people that she did not even know ended up putting on their prom dresses and suits and going to her room just to join in.

Similar to ‘open dormal,’ many social clubs utilize open dorm to grow closer to one another and enjoy more time with their beaux or queens, according to Arendale.

“Beaux and queens seem to really go above and beyond and make nights like open dorm a great memory,” Arendale said. “Personally, I look forward to open dorm because one of my awesome Delta Gamma Rho beaux, Zach Cowdery, uses the night as an opportunity to serve us with a homemade waffle night.”

Regardless of how you choose to use open dorm, Ellis encourages all students to participate and make the best of this opportunity.