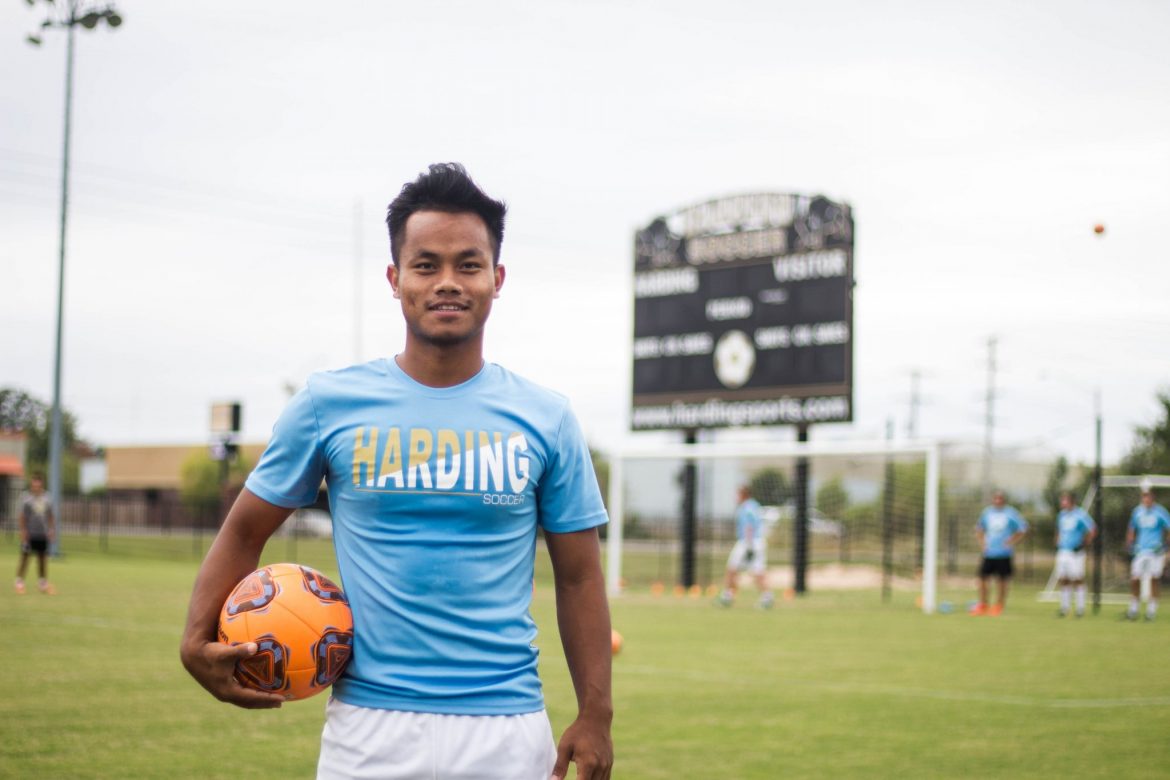 Senior midfielder Van Thang has been kicking a soccer ball since he was 5 years old. Thang knew then that he loved soccer, but did not know what the next few years would bring. Today, Thang knows that sacrifice is the reason why he is playing soccer in the United States.

“My parents will sacrifice anything they have to help me have a better opportunity,” Thang said. “Life was really difficult in Burma. Most of us were farmers: if you didn’t grow your food, you wouldn’t have anything to eat.”

Due to the war in Burma, Thang moved with his family to the United States when he was 10. His family moved to Lewisville, Texas, and Thang played soccer at Lewisville High School.

Thang was encouraged to go to Harding by his high school coach. Former Harding men’s head coach Odie Guzman played for Thang’s high school coach, who contacted Guzman about Thang. Thang said he is very thankful for what Harding has done for him.

“Harding has made a huge impact on my life,” Thang said. “It’s impacted me spiritually. The people here are Godly people. Seeing them every day motivates me to do better things in life. The professors have impacted me because they actually care about you unlike those at other schools.”

Head coach Jon Ireland is in his second season coaching the men’s soccer team. In his short time with Thang, he has quickly learned just how important he is to the team.

“Van is the heart and soul of our team,” Ireland said. “He’s the hardest worker on our roster. After games, opposing coaches will talk about him because of how hard he plays.”

Thang was a part of the team that made history last season when they defeated Oklahoma Baptist 2-0 and were crowned Great American Conference champions. Thang said that before that season, he thought about quitting.

“I almost quit after my sophomore year due to our season performances,” Thang said. “I thought about transferring to a different school but then coach Ireland came and changed everything. He’s a great guy and knows what he’s doing.”

Thang is one of two seniors on the team, and he prepared for his bigger role by practicing in the summer. Ireland said Thang’s talent and heart prove why he is a leader this year.

“I can just tell he’s a leader,” Ireland said. “He’s got the passion, discipline and commitment. He’s not really vocal but leads by example. I know that he’s going to give everything he has every game.”

Teammates also see Thang’s leadership by his actions both on and off the field. Sophomore midfielder Christian Ramos said he constantly looks out for his teammates.

“He’s always very positive and pushes us to succeed in class and on the field,” Ramos said. “He works very hard. I never see him slacking.”

Thang is a finance major and hopes to move to Dallas after graduation and work for a bank. His goal in life is to do international business with Myanmar and get a dual citizenship so he can split time living in Myanmar and Dallas. Thang said he is very thankful to God for watching over him during his soccer career.

“God is a big part of my life,” Thang said. “A lot of people get hurt but I haven’t been severely injured in my career, and I view that being God’s love and grace. God has played a huge role in my soccer career.”