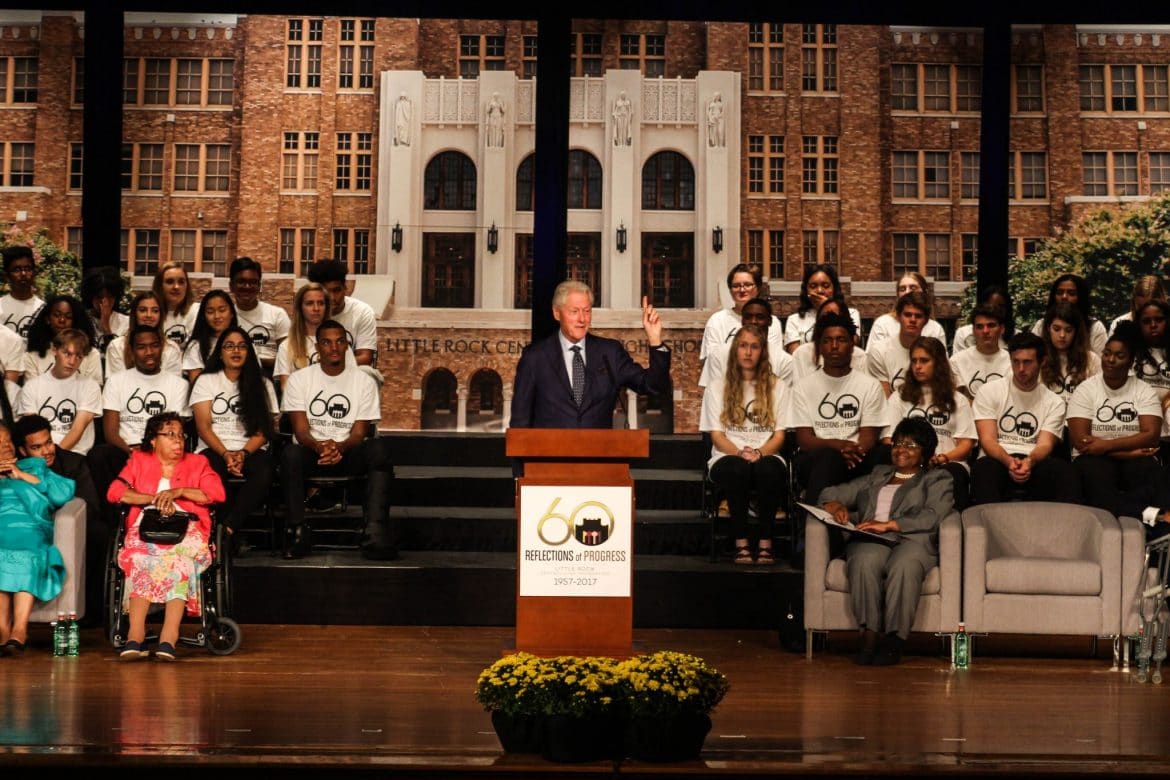 Last week marked the 60th anniversary of the integration of Little Rock Central High School. On Sept. 25, 1957, nine African-American students entered the doors of the all-white high school for the first time. This was their second attempt to integrate after the Brown v. Board of Education decision to end segregation in 1954, previously prevented by orders of then Gov. Orval Faubus. According to the Little Rock Nine Foundation, the nine students helped create equal education for all Americans while ending segregation in Arkansas.

Senior Delilah Pope, president of the Black Student Association, attended the panel discussion of the children of the Little Rock Nine and was able to meet two of the surviving students.

“I think that the legacy of the Little Rock Nine is something that is felt by all black students here at Harding,” Pope said. “But then you also think about just the ability to go to school with your white peers, it makes a big difference to any student, and it’s something that we can’t even really imagine not having today.”

“I think that was the minute it hit me: I study my dad in classes. People take tests
on someone that I complain to. How weird of a reality to live in,” Green said. “It hit me. I am in an American history class learning about people that I call auntie and uncle and now are family.” Like Green, students across the country learn about integration and the Civil Rights Movement. On Friday, Sept. 22, Clay Enoch’s sculpture, “United,” winner of the 2016 Sculpture at the River Market Public Monument Competition, was dedicated to the Little Rock Nine at Little Rock Central. The statue includes two figures holding incomplete rings indicating that there is still progress to be made.

Dr. Tim Westbrook, director for the Center for Distance Bible in Education and Ministry and sponsor of the Black Student Association, focused his dissertation on intercultural communications and black relations in predominately white schools. He said race issues still exist in the U.S., and private Christian schools are still aiming for more diversity.

“We have a beautiful moment in history with the Little Rock Nine,” Westbrook said. “They made a statement, and it changed the course of history for our state, but there is still work to do. I think the question is not what is Harding’s place in historical projection of integration, but it is what is its place in a Christian education and how are Christian schools in general responding to the lack of diversity in campuses now 60 years later?”

Angela Adams, teacher of civics at Harding Academy, attended the Little Rock Nine celebration events during the weekend. She said meeting the surviving Little Rock Nine was on her bucket list and that she now feels she can teach the subject better to her students.

“So much of it and what they shared in their message was the people that stood by and did nothing,” Adams said. “The biggest bulk of people are just silent witnesses to it, and I think that really speaks to us today … It’s not okay just to not be the one picking on them but you have to be standing up and helping them.”

Adams said listening to the speeches of the Little Rock Nine and their children was overwhelming, and that their stories were notable and inspiring.

“There are so many lessons,” Adams said. “You can’t look at America right now and not see that there is work to be done. As a teacher that’s what I focus on in telling my students: ‘Maybe you’re not the one bullying but are you watching it happen?’” Though desegregation of schools was ordered more than 60 years ago, the U.S. is still making progress toward racial equality in public schools. In May 2016, a Mississippi school district was forced to “meaningfully integrate” by discontinuing policies which effectively segregated the district, according to NPR.

As a student at Harding, Pope acknowledges the differences between people, and she sees a progression of unity among diverse students.

“There is definitely a lot of cultural barriers that have to be overcome,” Pope said. “I definitely wouldn’t say that it’s a bad thing at all. It depends on who you ask. You kind of see in going to school at a predominantly white school (that) it’s nice to get to know people and see cultural walls breaking down as you get to know different people.”

According to Westbrook, there is a long way to go regarding racial integration in the U.S., but the effect of the Little Rock Nine still resonates.

“I think that the legacy of the Little Rock Nine is something that is felt by all black students here at Harding, and it’s not even just a Harding thing, in the United States as a whole, but especially at Harding I feel like it’s so applicable because you have that very close history, it’s almost next door,” Pope said. “But then you also think about just the ability to go to school with your white peers, it makes a big difference to any student, and it’s something that we can’t even really imagine not having today.”

During the panel discussion, Evan and Matthew Pattillo, sons of Melba Beals, recounted seeing their mother’s picture in the book, “Warriors Don’t Cry,”  which helped them fully realize their mother’s legacy. Evan Pattillo said his teenage years were spent traveling with his mother, when he realized the significance of her life.

“(Matthew Pattillo) actually didn’t know it was my mom; he thought it looked like my mom,” Evan Pattillo said. “Being here today, I’m realizing it on a whole other level … I got it then, and I’m getting it even more now.”