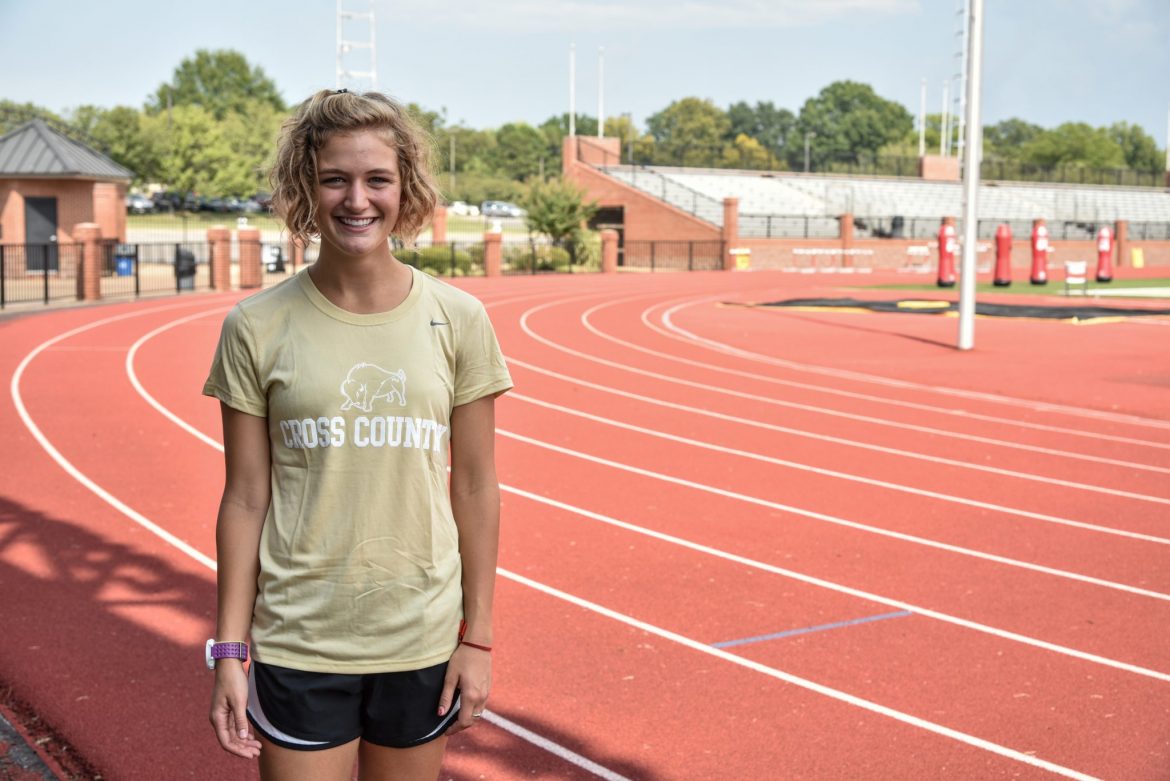 Most athletes discover the sport they excel in at a young age. For senior Madison Drennan, cross country was not exactly her first choice. Growing up, Drennan tried tennis, softball and cheerleading but did not enjoy them. So, she started running.

“Running was one of those things I started doing because I couldn’t do anything else, and it’s developed into something I’ve absolutely loved,” Drennan said. “I’m very thankful for the ability to do it because it keeps me sane and it brings a lot of joy to my life.”

During Drennan’s sophomore year of high school, she said she experienced a strange moment in her life. Harding helped get her back on track.

“I toured colleges my sophomore year of high school when my brother graduated high school,” Drennan said. “I was in that weird stage in life where I didn’t want to go to school after I graduated. When I visited Harding, I actually liked it. I only applied to one other school.”

Drennan entered her freshman year as a new face among thousands, but instantly became a part of a family when she met her cross country teammates.

“It was really cool to come to Harding and already have a group of people to fit in with and have people I wouldn’t feel weird around,” Drennan said. “If I would’ve come here without joining a team, I would’ve felt swallowed.”

Drennan has received first-team All-GAC honors every year she has been at Harding. While her numbers show incredible talent, head coach Steve Guymon said it took a few years for Drennan to feel confident in her running ability.

“It took me a good two years to drive into her that she has talent, and when it started clicking, she realized that maybe I was right,” Guymon said. “Once she discovered that, she started doing things she didn’t think she could do. I think she’ll only get better and better throughout the year.”

Drennan said that as a team, she would love to win conference in her last season. As for personal goals, Drennan hopes to accomplish new things while staying healthy.

“I want to break 18 minutes in my 5K time; that’s my personal goal,” Drennan said. “I want to make it through the entire cross country season without any injury just so I’ll know I gave it everything I had. I want to go out with a bang.”

Drennan credits former teammates Ewa Zaborowska and Dallas Bailey as her mentors when she joined the team in 2014. She said that they have both been her role models.

“Ewa was a phenomenal athlete but also a phenomenal person and hard worker in what she does,” Drennan said. “Dallas was one of my best friends, and I really admired her work ethic. They’ve both been really good examples for me spiritually and in life.”

Drennan has left a huge impact in the cross country team during her college career. Junior teammate Kayla Vance said that she will miss Drennan’s fun-loving spirit and her leadership.

“She’s one of the most encouraging teammates, and she tries to include everybody,” Vance said. “Her laugh is very contagious. She is super happy all the time.”

Drennan is a social work major and is considering graduate school or entering the workforce after graduation. However, she said that running has helped prepare her for life after college.

“Running has taught me a lot about perseverance and teamwork, and those are things I can implement in every aspect of my life with raising a family or working with colleagues,” Drennan said. “Being a social worker, you work with other people that are also helping those in need receive resources, so I think being on a team is going to have helped a lot with that.”

Drennan will compete in her next race on Friday, Oct. 6 at Southern Arkansas University in Magnolia, Arkansas.

Taking a Stand By Taking a Knee | Is it Proper?