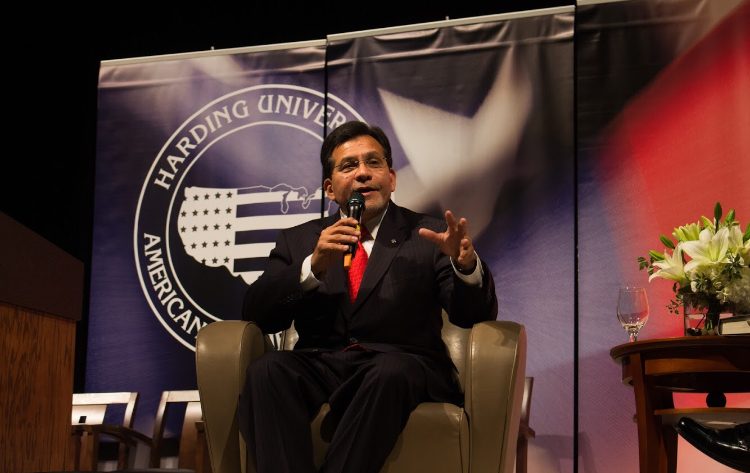 Former Attorney General Alberto Gonzales took the Benson stage on Thursday, Sept. 7 to discuss his time in the White House and his new book, “A Conservative and Compassionate Approach to Immigration Reform: Perspectives from a Former US Attorney General.”

Gonzales, the first speaker in the 2017-2018 American Studies Institute (ASI) Distinguished Lecture Series, was led in discussion by President Bruce McLarty. The talk centered on his childhood, his career, the 9/11 attacks, enhanced interrogation tactics and his resignation from his position as attorney general.

As the highest-ranking Latino American in the U.S. government, Gonzales’s childhood was unlike that of most government officials. Gonzales grew up in Humble, Texas, as one of eight children born to immigrant parents. He spoke fondly of his migrant worker parents who gave him his faith and his drive.

“I learned the value of work from my father,” Gonzales said.

Librarian Hannah Wood said she appreciated that Gonzales shared stories of his upbringing.

“I loved hearing him talk about his family and the values and work ethic they instilled in him,” Wood said.

Due to his expertise in immigration reform, Gonzales expressed his thoughts on President Trump’s recent rescinding of Deferred Action for Childhood Arrivals (DACA). Gonzales explained his sympathy for DACA recipients and declared he has no issue with allowing them to stay in the U.S. with “some kind of legal status.”

However, Gonzales also said he believes rescinding DACA may push Congress to create legislation that will put immigrants in a better place.

“I’d like to see it all handled in one major immigration bill,” Gonzales said. “I just don’t think Congress is up to doing that, and I regret that because that’s their job and they’re not doing it.”

Senior history major Sam Aly expected DACA to be a topic of discussion during the event.

“I went because it was a great opportunity to see a famous politician, and I wanted to hear his opinion as a Hispanic-American and the former AG on the recent events surrounding DACA and Trump’s immigration policy,” Aly said.

Gonzales was serving as counsel to former President George W. Bush during 9/11 — what many consider one of the most influential days in U.S. history.

“We take our cues from the president,” Gonzales said. “I was curious about what I would see in President Bush’s face.e was determined, and he was angry.”

The next morning he arrived back to work in a “brand new world,” one into which he was abruptly thrown, where he advised the president through the turbulent and controversial efforts during the War on Terror. In 2002, the Bush Administration faced severe criticism over the interrogation techniques used at the Guantanamo Bay detention camp.

Wood said that it was interesting to hear Gonzales discuss his experience working through 9/11 and the events that followed.

“I was a senior at Harding when 9/11 happened and then moved up to DC just before the one year anniversary, so much of what he talked about felt very personal,” Wood said.

Aly thought he defended his role in Guantanamo Bay well.

“His interpretations of the law were objective, and decisions that were made during his time in the White House were made by others at his recommendation,” Aly said. “In other words, he didn’t have the final say,”

In 2007 Gonzales resigned amid criticism and an active investigation into the controversial War on Terror surveillance program: Stellar Wind.

“It was lonely and dark, and I was miserable,” Gonzales said about the months following his resignation.

Gonzales is currently a professor at Belmont University in Nashville, Tennessee, where he also serves as the dean of the College of Law.

“I’m proud of my service, and I’m proud of what we did in serving all of you. That’s what I chose to focus on,” Gonzales said. “And for those going into politics, go in with your eyes open and your armor on. It’s hard, but it is so, so rewarding.”