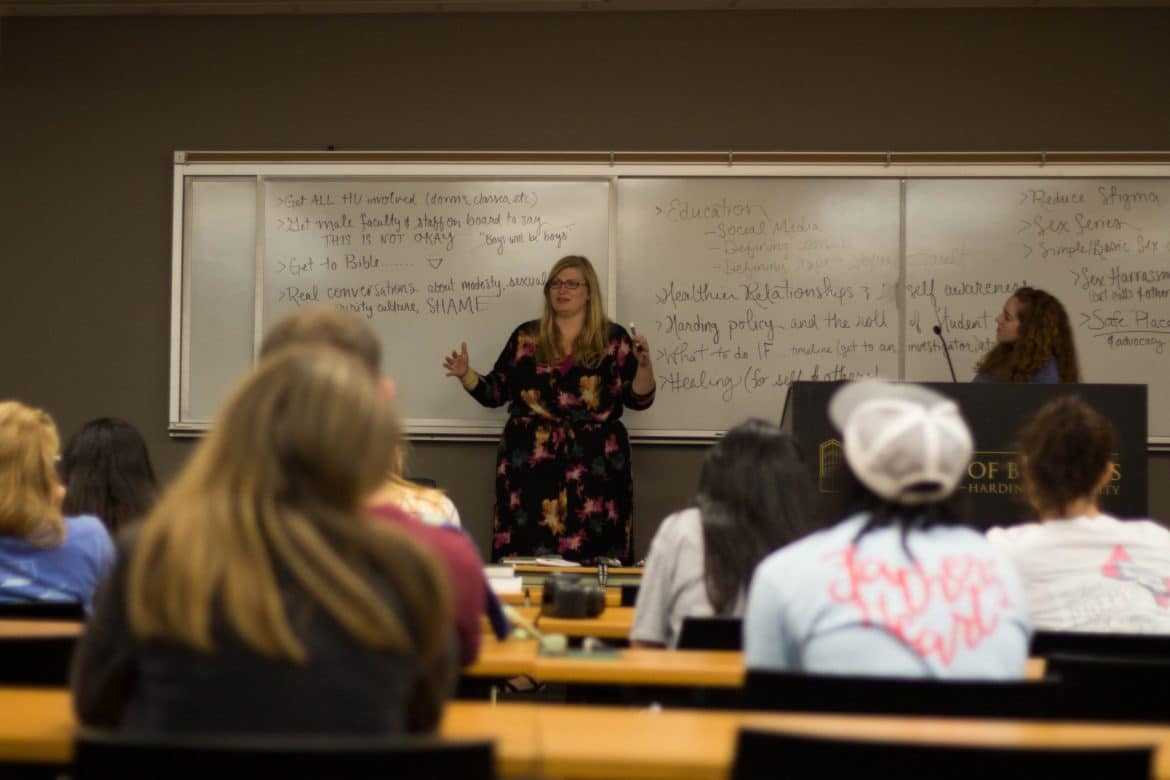 Sponsor Stephanie O’Brien speaks to members of HU Brave Aug. 30. The group became an official Harding organization at the beginning of August. Photo by Macy Pate

HU Brave is a new organization on campus whose goal is to educate people and spread aware- ness regarding sexual assault. Senior Caitlyn Denison, who experienced sexual assault in 2017, co-founded the organization along with director of academic resources Stephanie O’Brian.

“I felt really alone, and walking through all the buildings, I never saw anything helpful to me,” Denison said. “So I started looking around, and I did some research, and it was way too hard to nd information on help for sexual assault victims or survivors.”

Denison decided something needed to be done to fix that.

HU Brave was created when Denison and O’Brian sat down and began discussing ways they could impact campus in a positive way when it came to sexual assault awareness.

In April 2017, they created Facebook and Instagram accounts, HUBrave and @hubrave respectively, to share stories of Harding students, alumni, faculty and staff who are survivors of sexual assault.

HU Brave’s main goal is to educate people about sexual assault. e organization would like to start conversations that people otherwise avoid due to the sensitivity of the issue.

“Harding needs to be very open about it and acknowledge it because there is no way that you can experience evil in that way and it not a ect you spiritually,” O’Brian said. “If we are an institution that is truly a community of mission, and is truly primarily focused on the spiritual well-being of our students, then we need to help talk about this.”

According to Harding librarian and HU Brave sponsor Lisa Fuller, there is a stigma and a sense of shame attached to the issue of sexual assault that prevents most survivors from opening up about their own stories.

O’Brian believes Harding is not immune to sexual assault simply because it’s a Christian university.

According to Denison, inspiring survivors to come forward and start healing is the best part about spreading awareness.

“A lot of people go through this silently, and if we can teach people here not only to recognize the signs but to get people the proper help that they need, we will be making a positive impact,” Denison said. “So that’s a big deal, and it also lets survivors know that people stand with them, that we recognize that this is an issue and we are not going to lay down for it anymore.”

At HU Brave’s first meeting the group wrote out their goals on white boards. According to O’Brian, these goals included empowering survivors to tell their stories, educating people about sexual assault and ways to prevent it.

“We want to do a lot of community outreach,” Denison said. “We also want to teach concepts like consent, healthy relationships and sex from a proper Christian standpoint.”