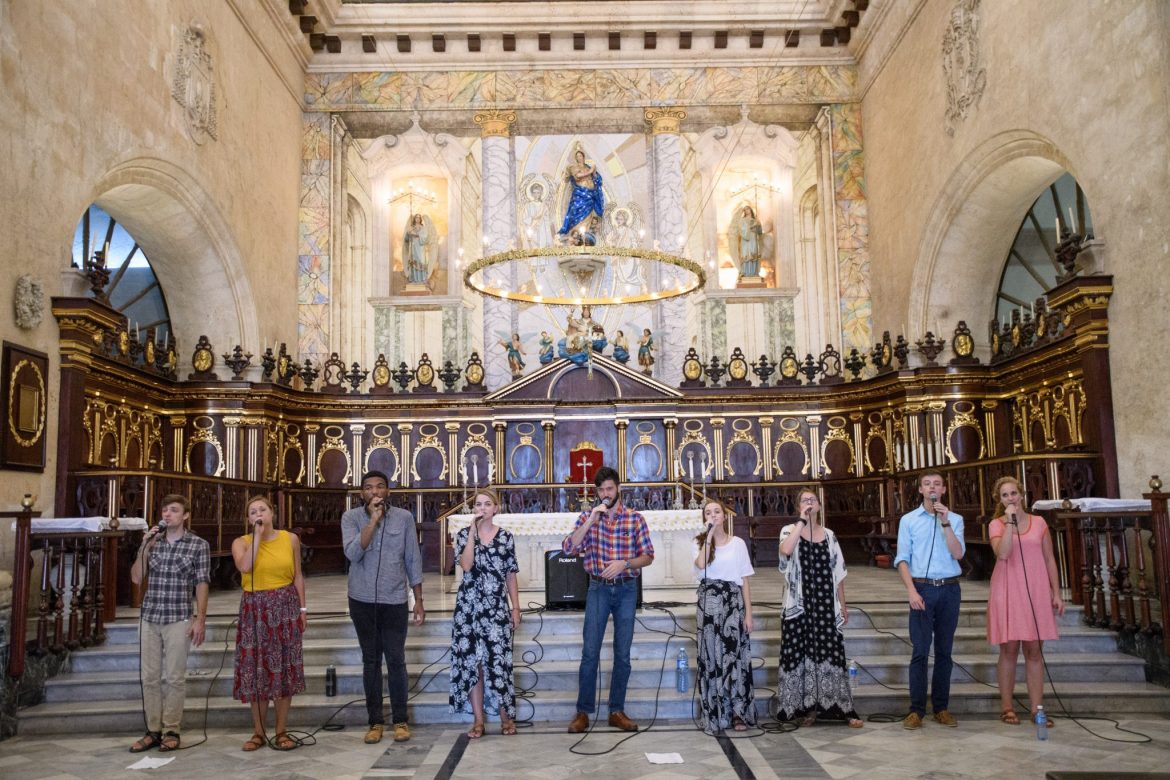 “When people think of Cuba, they think of the embargo and the trade and all of the government and communism, but no one knows there’s a Cuban church, let alone a Church of Christ down there,” said sophomore Ally Davis, who traveled with nine other Harding students to Cuba this summer.

The opportunity arose when Tony Fernandez, a Cuban speaker at last year’s Lectureship, heard the Good News Singers (GNS) perform. He invited them to Cuba for 10 days to sing at a youth conference on Aug. 2.

According to the director of GNS, Chuck Hicks, the trip was possible only by the hand of God.

“I’ve seen the Spirit of God work, but I’ve never seen this before,” Hicks said. “I’ve never seen the eyes of immigration officials shielded so I could carry in my equipment. I’ve never seen government officials stand up and applaud God. I’ve never seen people so poor try to give so much.” According to Forbes Magazine, the average Cuban makes less than $30 a day. “They’re much more impoverished than we are; and in that sense, they’re lacking,” senior Daniel Smith, a tenor in GNS, said. “But they’re not tied down to material things like we are, either. So that, at least in my observations, I guess, frees them up to be the hands and feet of Christ.”

The nation of Cuba is a communist state, and until 1991 was coerced by the government to be an atheist state as well. Cuba has freedom of religion, but the government still makes it difficult to obtain permission to build churches.

“They have to jump through so many hoops because of government-related things,” Smith said. “But that doesn’t stop them. They work so hard, and the people are so devoted because for so long there was this void that could not be filled, legally at least. And then, finally, when it was allowed, people had such a hunger for it.”

GNS worked with a house church based in Matanzas, Cuba. It was built by Fernandez and his family, and service was held in a large extended patio at the back of the house.

“Their church ‘building’ had no walls. It was just a big covered patio,” Hicks said. “But none complained about the oppressive heat and stifling humidity, they just thanked God that they were able to be together to sing, pray and praise God.”

Hicks said the mission of the trip was to encourage the people of Cuba, but more than that it was to form relationships.

“It was to encourage and show that Americans, Christian Americans, have the same beliefs and same convictions and want to bridge this gap that’s been between our two countries for so long,” Smith said. “The love of Christ that flows through us and through them was so at work in those relationships.”

Hicks, who still talks to Fernandez weekly, said these relationships have been maintained after the group returned to the States.

“I must admit,” Hicks said. “I have 20 to 30 new Facebook friends from Cuba, and every day I get new ones on there. It’s beautiful.”

Davis admitted that the language barrier between the group and the people of Cuba was difficult; however, it did not stop them from praising God together.

“It’s overwhelming to realize that you are worshipping the same God even though you’re worshipping with people you’ve never met before, and who speak a completely different language,” Davis said. “They all sang in Spanish, but you could tell they were singing the same tunes. They don’t quite know how to harmonize, but they sing so loudly and it’s beautiful. It’s one of those things that hits you hard in the heart and clenches you.”

The group traveled all over the island of Cuba singing for and with various groups.

“We sang in homes, churches, conference rooms, cathedrals and caves. It’s our way of communicating,” Hicks said. “Singing breaks through language barriers faster than anything else. It knocks down walls that divide nations. It brings harmony possibilities for society into focus.”

This was seen clearly when GNS performed at a Catholic cathedral in Havana.

“The president of the National Council of Churches in Cuba stood up and said, ‘This right here, this harmony is the kind of thing that makes the world better. Harmony makes us the same and brings us together,’” Hicks said.

This is a harmony the group hopes will continue to expand in the future.

“I definitely think that this isn’t the last time that Harding will go down there,” Davis said. “It’s a door that’s opening wider.”

Braver Than You Believe | Taking a Chance

Keep it Savvy | Stopping to Give