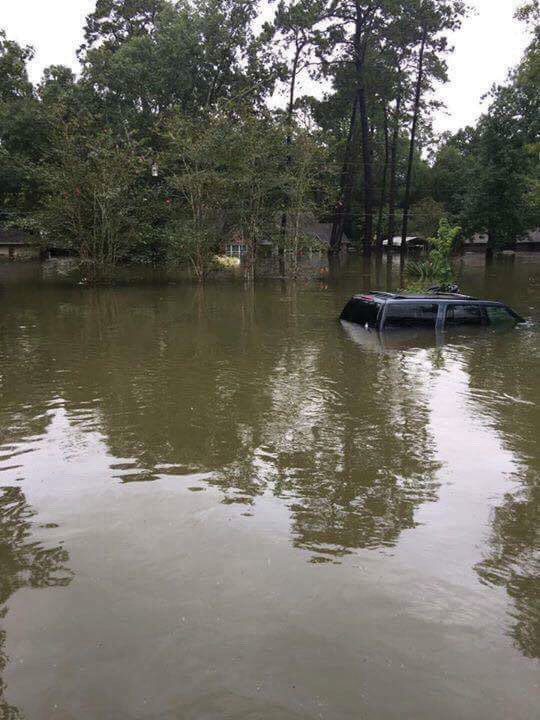 A car sits half underwater in Houston, Texas. Tropical Storm Harvey first hit Texas on Friday, Aug. 25 as a Category 4 hurricane and broke the U.S. rainfall record on Tuesday, Aug. 29 with approximately 52 inches of rainfall measured by the National Weather Center. Photo Courtesy of Mary Zeek

The confirmed death toll for Harvey has reached 17, many more are missing and at least 32,000 are in shelters across Texas, as of Aug. 30, according to NPR. Senior Michela Giordano, a resident of the Houston area, said she has felt anxious about her family’s safety since the hurricane hit the state and her family was forced to evacuate their home in Richmond, Texas. Giordano said her home flooded last year, and they finished making repairs in December of 2016. Now her family home has flooded again due to Harvey.

“I didn’t realize how burdened I was just knowing my family was (in Texas) until they weren’t,” Giordano said. “I’ve been really upset the past couple of days, but I thought it was in general. This is terrible for everyone, and I was worried about my family, but I am still so sad for everyone there. Sometimes you just have to take a break from looking at it.”

Giordano’s family rented a Jeep to tread through the flooded streets and a U-Haul to save their furniture.

“It’s the unsettling feeling of knowing that everything is getting destroyed. Not just your home, but your city and seeing all the terrible things people are going through — I don’t know, it’s just hard,” Giordano said. “I feel much better now that my family is in Austin; they are safe. Hopefully more and more people will have that opportunity.”

Giordano said floods are generally rare in her hometown. She said the rains came quickly and with little warning, before complete arrangements were made.

“The chances of (a massive flood) happening are so slim, so why would you prepare for it, you know? It’s just taken everyone by surprise. It’s so crazy. I just still can’t believe it’s happened most of the time,” Giordano said. “All my family is there, and I just really wish I could be there, too, just to be going through it with them, knowing everything that’s happening, helping in any way I could.”

Sophomore Sarah Borucki is from Spring, Texas, just north of Houston. As of last week her family, which still resides in Texas, was under voluntary evacuation. While parts of her hometown were underwater, Borucki said the water began to subside on Wednesday, allowing her family to stay. Although she’s grateful that her family did not have to evacuate, Borucki said being so far from home while hearing news of the storm was nerve wracking.

“I felt a lot of anxiety. There was a lot of unknown, you know? Power would go out and the wifi is out, so it was spotty when I tried to contact them,” Borucki said. “It was stressful just trying to know what was happening.” Borucki stressed that there is great need for disaster relief and aid after the storm subsides. “There are a lot of people who have severe damage,” Borucki said. “I have friends who lost their homes, so that aid is really important.”

Borucki said she empathizes with other Harding students and faculty who have family or friends affected by Harvey.

“Know that God is in control and he has a plan,” Borucki said. “Through the devastation, he’ll make it good.”

As the storm slowly made its way out of Texas and into Louisiana, Louisiana Gov. John Bel Edwards released a statement Tuesday that the storm “has tremendous potential to continue to drop heavy amounts of water, and to prevent people from going about their normal daily business in a safe manner.”

While Harvey does not appear to be moving toward New Orleans, NPR reported that officials are still concerned about potential flooding. This week marked 12 years since Hurricane Katrina.

While there are many ways to contribute to the disaster relief in Texas and Louisiana, SA president semior Dakota Ellis said there are also ways to get involved on campus. Ellis said that as the needs of students affected by Harvey are assessed, the SA will continue to encourage and support through cards, meetings and prayer nights.