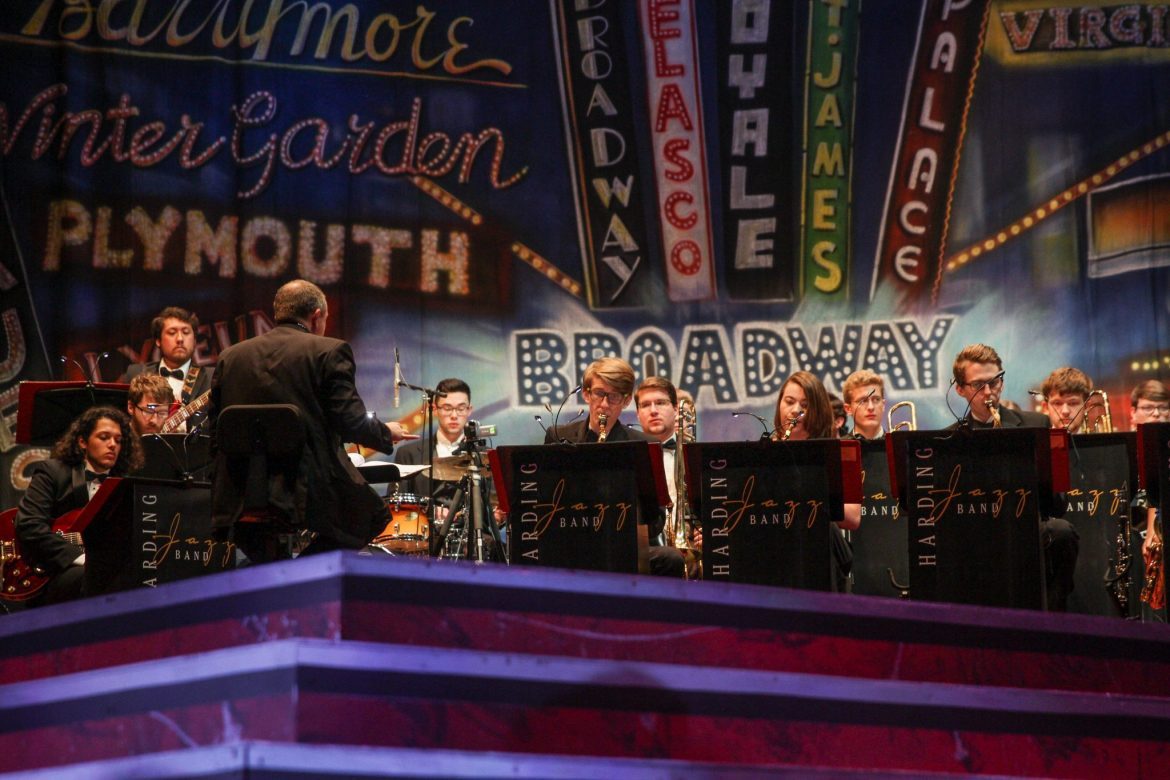 With changing directors, clubs, and hosts, Harding’s Spring Sing has seen numerous changes to its cast over the years, but through it all, the participation of the university’s Jazz Band has been nearly constant. This year’s Spring Sing show, “Curtain Up,” marks the 42nd year that the Jazz Band has participated as the production’s primary instrumental accompaniment.

The band has been a part of the Harding music program since the 1960s, specializing in blues, swing, funk, latin and contemporary music styles. The band plays several independent  shows each year, but according to Dr. Andrew Cook, assistant professor of music at Harding and the Jazz Band’s director since 2015, Spring Sing is the band’s biggest event of the year.

“Spring Sing is always the big highlight of the spring semester for us, because we end up learning nine or ten new pieces for Spring Sing,” Cook said.

Like Spring Sing’s hosts and performers, the Jazz Band practices every day of the week leading up to the performances, and according to Cook, the rigorous practice schedule is not the only challenge faced by his performers.

The band consists of about 18 students of various majors, and boasts five saxophones, four trombones, five trumpets, a piano, bass, guitar and drums.

Junior music education major Devin Daniel has been involved with a jazz band since the sixth grade, and has participated in Harding’s band program since his freshman year. He currently performs as the Jazz Band’s principal trumpet. According to Daniel, the unique experience of the Jazz Band has been a positive one.

main event,” Daniel said.  “It’s not just starting a song and ending a song, it’s following along making sure that we know where we are and doing a lot of listening. It’s a good professional experience.”

According to Cook, only four of the 18 members of the Jazz Band are not music majors, and he complimented them on their commitment, not only to his program, but to the Harding band program at large, as being involved in multiple bands often requires students to participate in at least one practice each day of the week.

“We have really talented and really committed students. And it’s just a different style and a different type of music for them to play and I think that they get excited about it as well,” Cook said. “There is tremendous dedication there.”

Each year, the band performs two of their own arrangements for the Spring Sing audience in each half of the show. Cook attempts to connect the band’s songs to the greater show as a whole, so this year he chose two broadway songs to fit the theme. After searching for the perfect fits, he found an arrangement of “I Just Can’t Wait to Be King” that he thought would complement the show. Cook also arranged “Don’t Break The Rules” for host Renee Maynard’s solo, an arrangement that he is especially proud of.

Daniel stressed the closeness of the group when it comes to practicing and performing, noting that there is a friendly rivalry between the stage performers and musicians, which has contributed to this year’s experience.

“It’s the amount of time spent on the bandstand, just playing with people that I enjoy playing with, and the reality is that there is a separation between the singers and dancers and the band, and so its fun having a little feud going on,” Daniel said. “It’s all good fun and games but it’s kind of a bonding thing with the band, because we’re the instrumentalists and they’re the performers. So we’ve become a tight-knit group.”