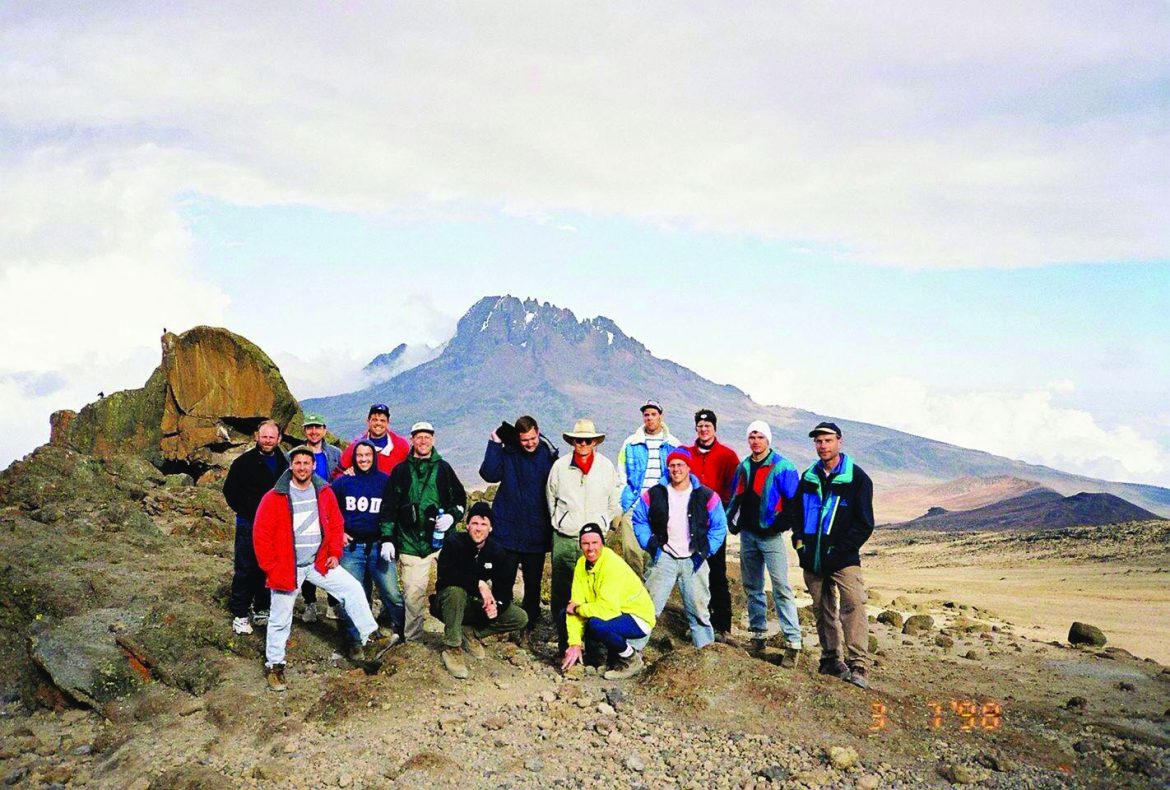 “I looked out the window, and I was amazed,” Mark Sekimpi said. “I expected (the development) because I watched the movies, and I could see the big cities, but now going through them — oh my God. This is real.”

Sekimpi was born and raised in the suburbs of Jinja, Uganda. His mother and father worked closely with missionaries, a group of recent college graduates who began church planting work in Jinja. His parents were converted Protestants, and they raised their son in accordance with their beliefs and ways of living.

During his childhood, Sekimpi attended school with children of the missionaries. With them, he developed close relationships and new best friends. He looked forward to reuniting with them in the U.S.

In August 2016, Sekimpi navigated through his first airport and stepped on a plane for the first time. He settled into his seat, listened to the pre-flight safety routine, buckled his seatbelt, and threw up in a paper bag as the plane took off.

By his second flight, Sekimpi’s nerves mellowed and his shaking settled. He enjoyed the flights and watching the clouds and landscapes through the plane window.

Sekimpi had begun his ascent.

The base of the mountain

In 1998, 15 men gathered for a six-day journey to the peak of Mount Kilimanjaro — a record-breaking mountain that stands in Tanzania, Africa. With an elevation of 19,341 feet, Mount Kilimanjaro is the largest free-standing mountain in the world, and its peak is the highest point in the continent.

The missionaries were accompanied by U.S. supporters who traveled to Tanzania in order to join the climb. Among them was Dr. Monte Cox, current dean of the Harding College of Bible and Ministry, who had helped inspire the original missionaries while they were still students at the university.

Cox and his wife worked as missionaries in Kenya from 1982 to 1992 and spent a year at Harding as visiting missionaries.

Among Cox’s students was John Barton. Barton was a senior majoring in Bible. He and his friends had been discussing post-university opportunities when Cox encouraged them to consider mission work, specifically in East Africa.

“We got to know (the Coxes), and they basically challenged us to take our commitments to one another and our commitments to wanting to do something good in the world, and challenged us to at least consider doing something outside the United States, and maybe even Africa,” Barton said. “That was the first time those ideas had ever even occurred to me, and I think to most of our group. I didn’t grow up thinking, ‘Hey, I want to be a missionary in Africa.’ It was something that kind of came out of the blue and surprised me — and surprised us as a group.”

Barton and approximately 24 fellow students went to Kenya with the Coxes for the following summer to visit and learn more about the mission work taking place in East Africa.

“We experienced it, it kind of got into us, and that dream never really left us,” Barton said.

Barton and his wife, along with four other families, followed the mentorship of Cox and moved to Jinja, Uganda, in 1994 as part of an evangelical church-planting team. Based on surveys regarding receptiveness and need for mission in East Africa conducted by former Harding professor Mark Berryman, Jinja was an opportune location for missionary efforts.

The mission team spent their beginning efforts developing relationships with local Ugandans, learning the language and planting churches. Barton jump-started the Busoga Bible School to help equip leaders in the community. However, in the midst of ministry efforts, the team began learning the importance of attending to physical needs as well as to spiritual needs, and their work began to evolve.

“It is hard to have a Bible study with someone when they don’t know if they are going to be able to put food on their kid’s plate that night,” Barton said. “Addressing issues of poverty, addressing issues of injustice, different kinds of corruption — those things were becoming more and more important to us and were becoming part of our mission work.”

As a result, the team purchased building space on Main Street in downtown Jinja with the mindset of tending to additional needs in the community. The Source of Life Resource Center and Cafe now includes a computer center, lending library, auditorium, dormitories, office space and The Source Cafe. It is a central location for the mission efforts, as well as a physical location for the Jinja Church of Christ and a meeting place for community assemblies and events.

The journey to the peak of Mount Kilimanjaro took six days. The men reflected and assessed their missionary journey in Uganda. They explained their progress to the visitors and discussed their strategies of moving forward, like that of the recently purchased Source complex.

“The trip was a transition point for us because we had enough experience planting churches and working in Uganda. We had deep relationships, and our mission work started to evolve a little bit,” Barton said. “We realized that to do effective Christian work in any kind of a place like Uganda by doing evangelism, church work has to evolve its efforts to address the struggles that people live in over there.”

The men talked about their future and what they wanted to accomplish in their missionary time.

“Now that we have some of these churches planted and these deep relationships and all these leaders that are coming, what are we going to do in the future?” Barton said. “How long are we going to stay here? Or when we move back to the States? What do we hope will be left behind us? How will the church work or the development work continue on?”

The hiking team trekked through lush rainforests and barren terrain for four days. Their last stop before reaching Uhuru Peak was at Kibo Hut, a cinder block building with a tin roof for hikers to rest. Dr. Deron Smith was among the climbers.

“When you are climbing with a group of people, there is something about climbing with friends that really deepens the experience, and then at the same time, there are aspects of the climb that are hard,” Smith said. “The farther you go up the mountain, the higher the altitude, the harder the air is to take in, and the oxygen level drops. It gets tough, so we made sure we were going together.”

Together, the group spent a night hiking to the highest point in Africa. Once they reached the top, the sun began to rise and spread light across the land before them. They took communion and sang a hymn in celebration.

“When you reach the peak of the mountain, it really is a symbol of so many things, so much that has been done, and if we believe that heaven is the ultimate peak, as good as it gets, that is going to be the best life,” Smith said. “Kibo reaches high. All of us reached the first peak together, and it wasn’t about how fast we traveled, it was about making sure we traveled together, and that everybody reached the peak. We want something similar for the people Kibo Group serves in Uganda.”

The reflections, discussions and dreams shared together during the trip up Mount Kilimanjaro continued after the missionaries returned to their Ugandan homes. The idea of sustainable development and community empowerment grew into Kibo Group International, which was officially recognized as a 501(c)(3) organization in 2002.

“The church work and the Kibo sustainable development work are like two wings of a bird,” Barton said. “They both need one another, and they both help the communities in Uganda fly.”

This is the first installment of the “Climbing from Kibo” series. The second installment will appear in the next issue of The Bison, on stands Friday, Jan. 27.