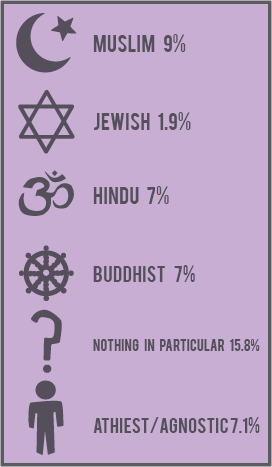 According to the Pew Research Center, 28.7 percent of Americans associate with non-Christian faiths or do not affiliate with any religion. Dr. Monte Cox, dean of the College of Bible and Ministry, said his upcoming book, “Significant Others,” addresses how to interact with Americans of varying faiths.

“For years I have had the feeling that the parents of my students (of living world religions class) were needing adherence of non-Christian religions in America more and more but didn’t have a clue about how to engage them in conversation about their faith,” Cox said. “We should be respectful, we should be informed, and we should seek to be persuasive.”

Throughout the year, Cox is presenting sections from his book during chapel. The banner used on stage during his chapel talks includes photographs of four non-Christian Americans whose smiles convey a message of friendliness, according to Cox.

“These are others, but we care about them,” Cox said. “They are significant to God, and they need to be significant to us … These are human beings, creatures made in the image of God, regardless of what they believe, they are worthy of our respect.”

According to Cox, the first step to conversing with a person of a different faith is approaching the person with intentions of a relationship. Cox said he has several friends of varying religions whom he met during his time teaching the living world religions class and traveling.

“Christians need to approach people no matter who they are with a goal of friendship,” Cox said. “God may use me, on the other side of that open door, to be a messenger to them.”

Cox said Christians should participate in discussions regarding faith and have a desire to share the gospel with others while being respectful, informed, and persuasive without being forceful or manipulative.

“Tolerance has taught us not only to not ask any questions about what people believe, but that faith is a private discussion,” Cox said. “Those of us in Christ should engage and not disengage.

A 2015 Pew Research Study projected that by 2050, global Hindu and Jewish populations will increase, Christians will shrink from more than three-quarters to two-thirds, and Islam will surpass Judaism in the U.S. “Significant Others” is intended to be a tool to prepare Christians for the changing religious dynamic in America.

“This book is for Christians in America who are interacting with Muslims, Hindus, Buddhists and other non-Christians in North America more than it is about equipping them to go to India,” Cox said. “The goal is to equip people to go next door and invite their new neighbor over for dinner and not be scared.”

President Bruce McLarty said he sees a growing need for Christians to learn how to speak with people of different faiths.

“Our world just keeps getting smaller and smaller,” McLarty said. “I know my grandchildren will go to school with Hindus and Muslims and Sikhs, so there is a need to know how, as a Christian, to understand and to speak to these people.”

Cox said people of non-Christian faiths in America may be more open-minded about Christianity than people of their same faiths in religion-dominated cultures, and that the uneasy feeling from being around non-Christians may be a message from the Holy Spirit to start a conversation.

“Some of these religions are just so different than we are used to that we don’t know where to start,” Cox said. “God almighty may have put you as a Christian messenger in the path of this person who is seeking him, and they might not know they are seeking him yet, but they will find out over time they get to know him, if in fact the aroma you give off is the aroma of Christ.”