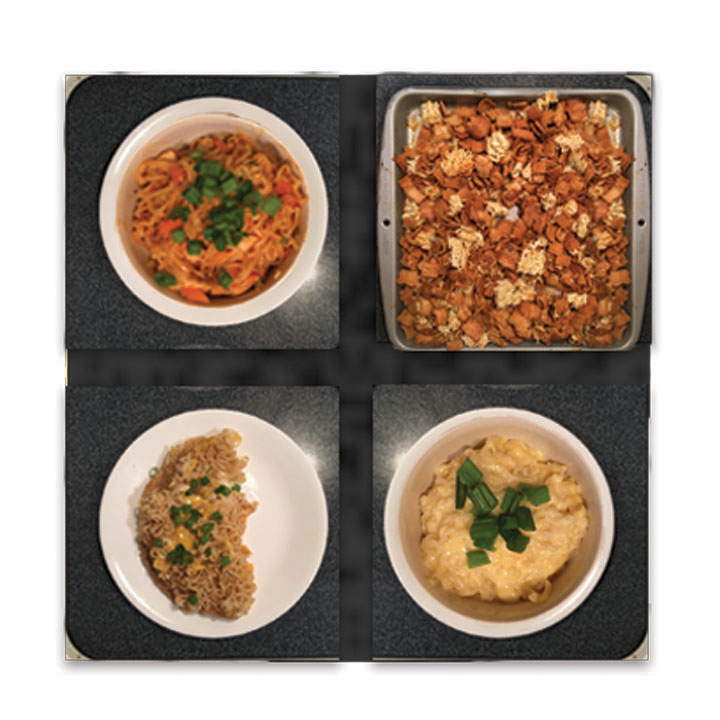 The point in the semester where bank account numbers dwindle is here. A night on the town turns into a night in the Student Center or the caf. Ramen noodles may or may not make up most of your diet, but it can start to look pretty dreary during those late night study sessions. Here are some tried and true ramen hacks to add some spice to your sodium-filled life.

For breakfast I tried the ramen omelet, and it was surprisingly delicious. This recipe is filling and tasty (not to mention cheap and easy to make), and I definitely plan on repeating it in the near future. Place unseasoned cooked noodles in a small pan, and in a separate bowl mix two eggs and the flavor packet together, then add egg mixture to cooked noodles and cook until combined. I added some cheese and green onions to add a little something extra. Served with some coffee, this meal lasted me through lunch.

For lunch, I made some mac and cheese ramen style. I cooked and drained the unseasoned noodles, then combined them with my favorite cheeses and a little milk for creaminess. I suggest using pepper jack and then topping with a little hot sauce for flavor, otherwise it is a little flat. This recipe is great, especially if you love mac and cheese as much as I do.

For dinner I made stir fry, which was the most expensive dish I made only because of the veggies and chicken I added. An easy alternative to buying fresh chicken and veggies is to buy frozen. Cook the chicken in a pan, and then set aside. Cook veggies in the same pan and combine with an egg once the veggies are cooked through. Dice the cooked chicken and add to veggie/egg mix, as well as cooked unseasoned ramen noodles. You can add bottled stir fry sauce if you choose.

Even after three meals of ramen-based entrees I decided I just hadn’t had enough yet. I decided I needed dessert. I combined a few cups of Teddy Grahams and a few cups of Golden Grahams with two packages of broken up uncooked ramen. I placed the mixture on a cookie sheet and drizzled melted butter and honey on top, then baked the mixture at 375 degrees until the ramen was browned. I broke up the mixture into pieces and put it in a serving bowl, and let my roommates make fun of my newly found ramen addiction.

I didn’t really follow any recipes for my day of ramen, I mostly just tried what sounded good. Like Thomas Edison creating the lightbulb, don’t be afraid to experiment with different recipes. You never know what fantastic concoctions you’ll cook up.