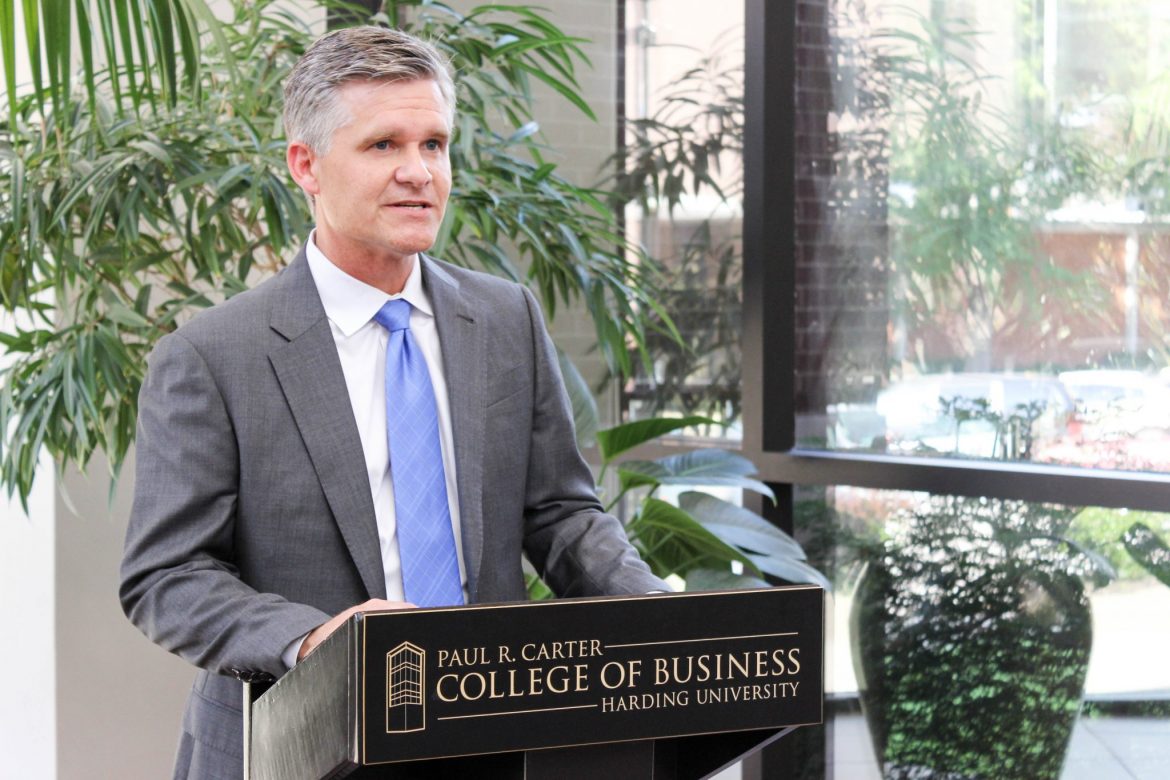 Biggs, a 1990 graduate from Harding’s College of Business, spoke on capitalism and the free market in America and helped inaugurate the Waldron Center for Entrepreneurship and Family Business on Friday, Sept. 9.

“I believe the impact the center will have on the student body will be great,” Biggs said in his speech. “This aspect of business can be an essential part of life for not just business majors, but everyone in all fields.”

Biggs’ thoughts on the Mabee building’s new addition tied into the theme of his lecture for the night, which focused on the importance of business and the impact Harding had on his success. Over the past eight years, Wal-Mart has hired 29 Harding students through the company’s accounting and finance development program. “(Harding Students) do amazingly well with our company,” Biggs said.

Biggs also stressed the importance of developing relationships both at school and in the work force.

“You will advance in your field based on how good you are, but there will be a part of your growth that won’t go any further unless you learn to work well with people,” Biggs said. “You have to learn to be adaptable with people … the world changes so quickly.”

Biggs even reflected on his own adaptability while a student at Harding. According to Biggs, during his senior year, he was persuaded to go on a field trip to Wal-Mart for business majors. Although reluctant to go, he went on the trip and met Sam Walton, who offered these words of wisdom: “You keep studying, you keep working hard, and you never know what you’ll end up doing.”

Twenty-six years later, Biggs helps lead the company founded by, what he considers, the greatest entrepreneur of our lifetime.

“We are the product of a great entrepreneur,” Biggs said.

Biggs said he believes the newly opened Waldron center will provide opportunities for the future, where business can grow and evolve on its own. The center’s location at Harding will exponentially help in the growth of business, according to Biggs.

“The intersection of faith and business can get challenging, especially in the world we live in today,” Biggs said. “At Wal-Mart, I don’t have to choose between the two; we’re about taking care of people and doing the right thing.”

This, according to Biggs, is why Harding and Wal-Mart mesh so well.

“These are two great institutions,” Biggs said. “It’s a great set of values that Mr. Sam built this company on, and I think that is a testament to Harding.”