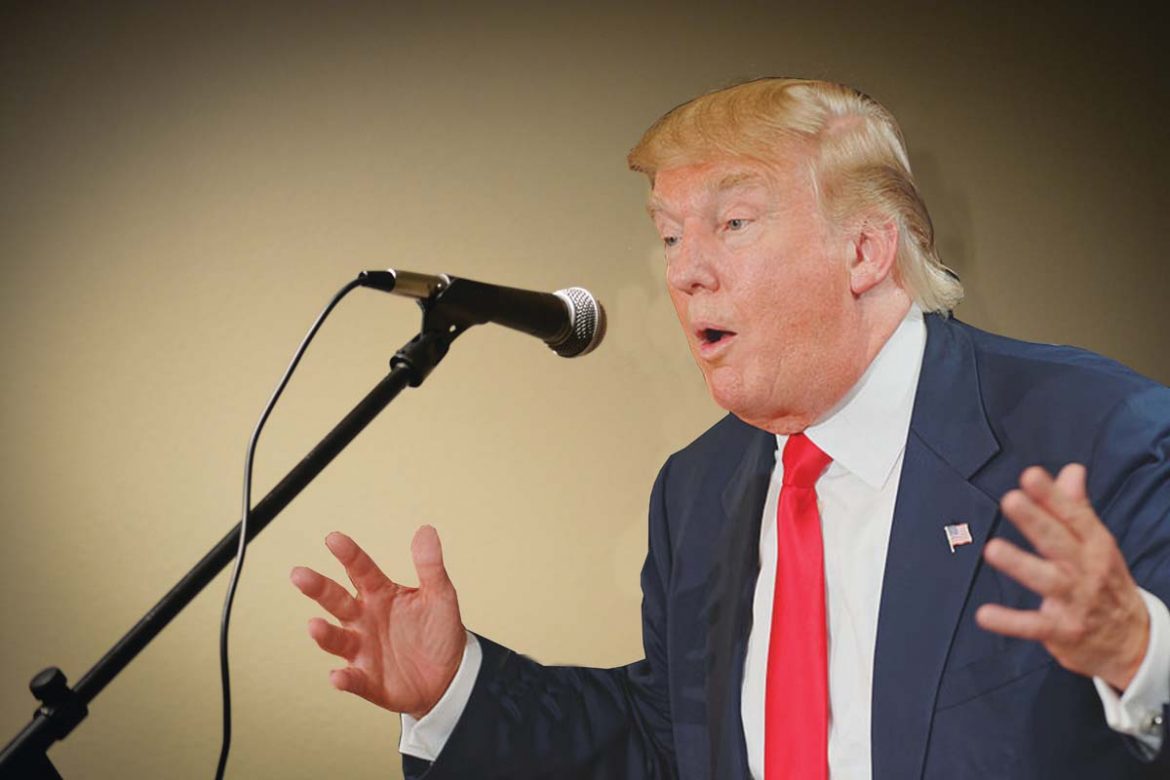 Junior CAB employee and Open Mic facilitator Cole Swearengen said he was surprised to see police cars and a limo drive up beside the Starbucks Community Room.

“(Trump) kind of just showed up without warning,” Swearengen said. “His head security manager approached me and demanded we reserve a spot for him to perform. I let it happen, but I was very, very shocked. I didn’t really expect him to ever show up. I don’t think anyone saw this coming.”

Once Trump was on stage, he did not waste any time.

“I will build a great wall,” Trump said as he began his performance. “Nobody builds walls better than me, believe me — and I’ll build them very inexpensively. It’s freezing and snowing in New York – we need global warming. All of the women on ‘The Apprentice’ flirted with me — consciously or unconsciously. My IQ is one of the highest — and you all know it. Please don’t feel so stupid or insecure. I’ve said if Ivanka weren’t my daughter, perhaps I’d be dating her.”

Senior Cassidy Hopper, regular performer at Open Mic Night, said she was in the corner of the room quietly rehearsing the song she planned to perform when Trump looked over clearly disgruntled that she was not committing her full attention to his carefully scripted masterpiece.

Hopper said she was astonished by the aggressiveness.

“A security guard grabbed me by the arm, escorted outside and confiscated my guitar,” Hopper said. “I perform (at Open Mic Night) almost every week. I had no idea that (Trump) would be there, but another performer has never confronted me about quietly practicing my songs. The community room is usually packed full and noisy most nights, so I don’t understand why he singled me out like that. Nothing I did warranted them taking my guitar, though. That was just low.”

After having security officers escort Hopper out of the venue, Trump continued his performance.

“Anyone who thinks my story is anywhere near over is sadly mistaken,” Trump said. “Get in. Get it done. Get it done right. And get out, get going. Move forward. Aim high. Plan a takeoff. Don’t just sit on the runway and hope someone will come along and push the airplane. It simply won’t happen. Change your attitude and gain some altitude. Believe me, you’ll love it up here.”

After his performance, Trump was asked if he regretted throwing Hopper out of the community room.

Trump shook his head and began to explain that Hopper was part of the problem with America nowadays.

Swearengen said the impromptu performance made CAB reconsider their rules for the event.

“I don’t usually critique any of the artists on Open Mic Night, because whether or not I think you’re talented, you’re still brave for getting up in front of an audience and expressing yourself,” Swearengen said. “However, I think that Trump was a little insensitive and over the top. We’re definitely going to have to enforce the rule excluding non-students or faculty from participating in Open Mic Night. I think if anything, this was a learning experience.”

The story above is part of our “April Fools Edition.” No factual value should be taken from this story.