David Barton to speak at ASI 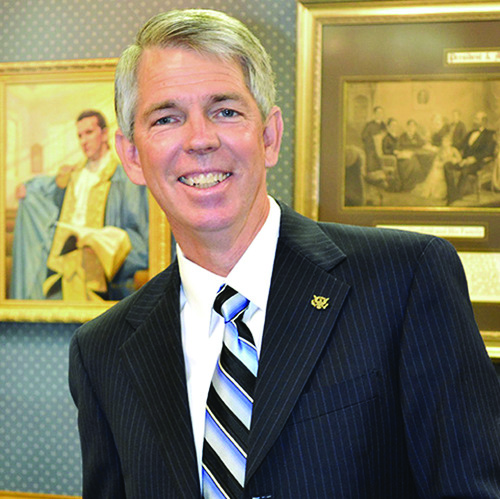 Founder and president of the WallBuilders organization David Barton will speak in the Benson Auditorium on April 7 to complete this semester’s American Studies Institute (ASI) Distinguished Lecture Series.

Barton’s lecture is titled “A Practical Faith in a Surprisingly Practical Bible” and should serve as a good end to this year’s ASI series, according to Associate Executive Director of ASI Kim Kirkman.

“His message is interesting across the board, even if you’re not a history fanatic,” Kirkman said.

Dr. Jim Carr, senior vice president and executive director of ASI, said that this will be Barton’s third time to speak at Harding and that he hopes to see a good turnout from not only the faculty and students but from the Searcy community, as well.

Equipped with historical documents, old Bibles and the like, Barton has an incredible grasp of the history surrounding the founding fathers and presents his material in a captivating way, according to Carr.

“If people will come, I feel confident they won’t be disappointed,” Carr said.

According to Harding’s website, one goal of the American Studies Institute is to “encourage students to continue the traditions that made America great,” with roots in “such concepts as freedom, liberty, democracy, faith in God, family and values.”

Barton’s WallBuilders organization cites similar goals on its website: “(We are) dedicated to presenting America’s forgotten history and heroes, with an emphasis on the moral, religious and constitutional foundation on which America was built.”

Though both Carr and Kirkman acknowledged that Barton’s name is not as well known as some of the previous ASI speakers, they expressed enthusiasm at the amount of interest shown on campus leading up to the event.

“We actually invite different faculty groups … usually related to the speaker (to meet with the speaker beforehand),” Kirkman said. “We’ve had quite a good response already, and I am excited for that.”

According to Barton’s website, Barton spent eight years as an educator and school administrator before founding WallBuilders. He has received multiple awards for his writings and work with the media and speaks at more than 400 events per year.

Barton will speak on April 7, at 7:30 p.m. in the Benson Auditorium. Admission is free and open to all faculty, students and members of the community.