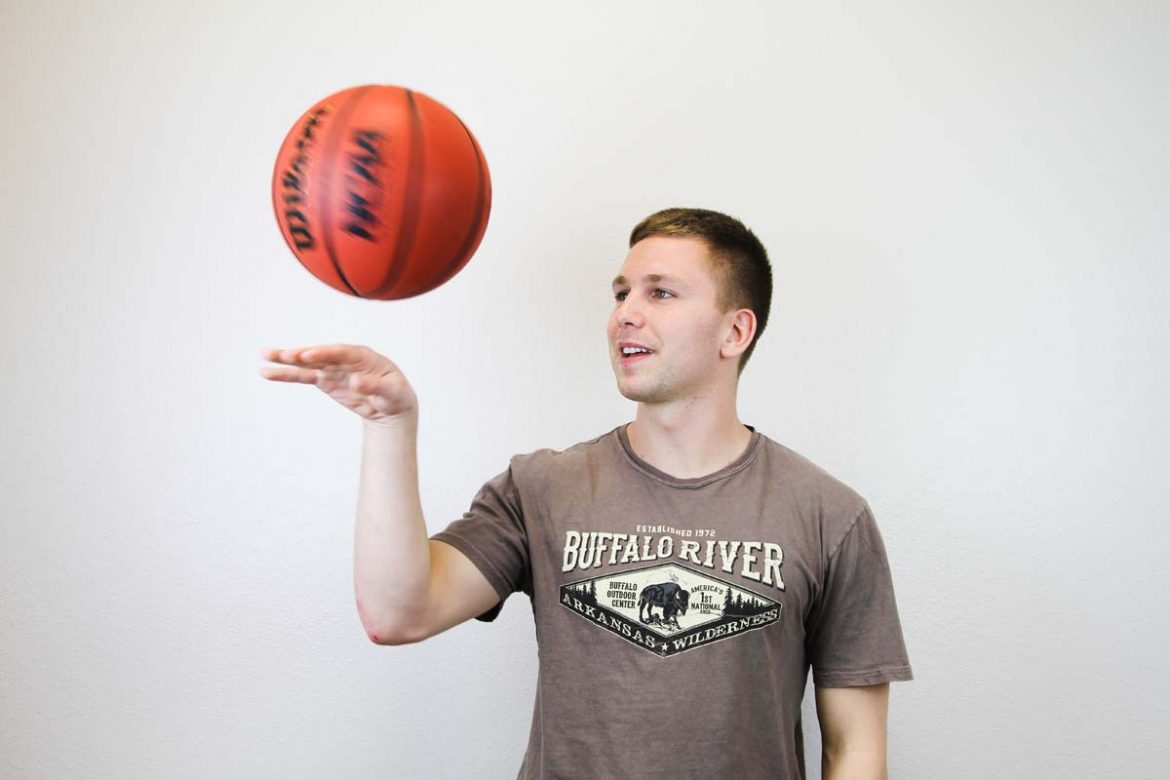 While many people are adopted early in life, Harding senior basketball player Dawson Yates has already experienced the feeling three times: by his parents, by Harding and by God.

Adopted at birth by his parents, James and Robyn, Yates grew up in Harrison, Arkansas, where he said basketball influenced him early on. to Yates, the game fueled friendships for a young boy who didn’t otherwise have them.

“Basketball got me my first real friends,” Yates said. “I didn’t really have friends until basketball came. It created toughness in me — it created integrity.”

The love Yates showed to the game growing up was reciprocated, and, even though he received no college offers after high school, basketball eventually led him to Northwest Arkansas College (NAC), where he was allowed to walk-on. It was there that, while driving together one afternoon, Yates’ NAC teammate Javon Wallace struck up a strange conversation. Wallace asked “Dawson, when you ask yourself a question, who answers it?” Confused, but willing to have the discussion, Yates told him that it was a person’s subconscious — to which Wallace responded, “No, it’s God.”

The discussion stirred Yates’ thinking, and, with that seed planted in his mind, he began to attend church with Wallace regularly. He found himself drawn in as questions began to fill his thoughts, but he still struggled internally with what he was hearing every Sunday. Although he had always had the opportunity to attend, church was not a part of Yates’ life growing up; his parents wanted him to either pursue religion or not pursue it on his own.

What Yates had already decided to pursue, though, was a spot on Harding’s basketball team. After tagging along with Wallace on a try-out to the school, Yates was given the opportunity to walk-on and play for the Bisons during the 2014-15 season. It was an experience he almost didn’t get the chance to have.

One morning, while driving home, Yates fell asleep at the wheel. He woke up in a ditch to a mangled truck – but two completely unharmed front seats.

“I woke up, and I was in the ditch, and I popped out and was completely fine,” Yates said. “So I looked in my car, and the two front seats were fine, and the rest of the car was destroyed. I guess I looked at the sky because I figured heaven was up there, and I was like, ‘Oh my… God is so real.'”

After walking away from his accident with renewed belief, Yates enrolled at Harding in the fall, set to begin the second stint of his college basketball career. However, despite his new outlook, things did not immediately click once he got to campus.

Even with his internal struggles, Yates slowly began to connect with his teammates on a level deeper than basketball. Lifelong friend senior Blake McNair, along with seniors Jacob Gibson and John Hudson, junior Will Francis and “locker buddy” sophomore Reggie Anthony, began to discuss, as a group, how they could be used as God’s instruments from day to day. The more the team talked and spent time together, the more Yates began to understand both Christianity and the Harding community.

“I got (good examples) from different perspectives every day,” Yates said. “I’ve got Blake (McNair) being the older brother that doesn’t take nothin’, John (Hudson) is a great example, Will (Francis) just walks the path so well, me and Gib (Jacob Gibson) are just fighting to get a little bit better every day, and then I see Reggie (Anthony) come from a place that he’s come from, and me from the place that I’ve come from, and we’ve both just toughed it out.”

One of those good examples was that of Bisons’ head coach Jeff Morgan, with whom Yates has a loving but complex relationship. Yates tells the story of a day when he walked into Morgan’s office before practice and happily asked for a hug — only to be turned down, but then promptly given his hug after practice.

“There have been so many days where we butt heads,” Yates said. “He gets so mad at me, it’s unreal. But I think he understands that we are both on this level of competition. We both see the bigger goal, and I think we’re both down to do whatever it takes to get there. Even if he wasn’t my coach, there’s so much I would have learned from him.”

Morgan and Yates’ close relationship, as well as bonds he built with assistant coach Ray Lynn Woods, head trainer Ronnie Harlow and the other members of his 2014 recruiting class, were just more steps in the right direction, and before long, there were two adoptions in Yates’ life: that of his parents and that of his school and his teammates. Both, Yates said, are his family now; and it was that family of Bisons that finally convinced him it was time to take the step of faith he had been searching for since his days at NAC.

“I felt the Spirit just take over me,” Yates said. “I had seen God knocking on the door and throwing me signals over and over again so many times in my life. That was the moment that I just accepted it. I’m so blessed. I got lucky — I got adopted to this place, and then I got adopted to the Lord.”

Yates was baptized on April 13, 2015, surrounded by his teammates and coaches as he experienced adoption into the family of Christ. While he may not have played the most in-game minutes, Yates’ Harding experience is one of a far greater variety: it is an experience that will last eternally.

And although his career between the baselines has now officially ended, he knows that what he gained from his time at Harding will carry on far after he leaves his locker for the final time.