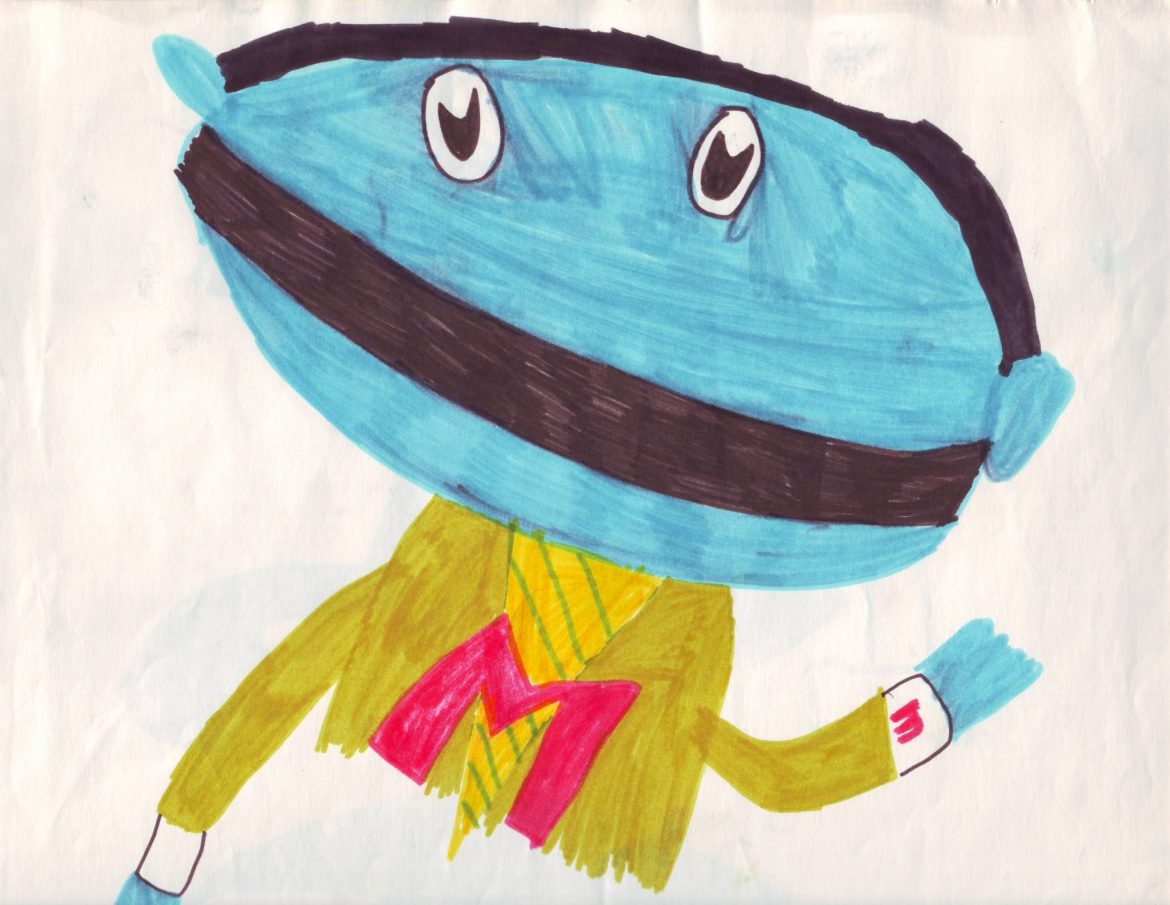 Have I ever told you that I once had aspirations to be an artist? You see, at the age of 5, I demonstrated a precocious talent for drawing. I know that because four rare pieces of my work from that era survive courtesy of my mother, who had the foresight to frame them. While other parents were content to display their children’s finger paintings with refrigerator magnets, my mother preserved my ballpoint-pen masterpieces behind glass, with mats and everything.

This evening I looked at the piece de resistance, now proudly displayed in a pile under my bed. It’s literally a tour de Force, as it is a sketch of the Star Wars cast circa 1977. Darth Vader is there, standing next to a Jawa and rather buck-toothed Sand Person. R2-D2 is in front, awkwardly proportioned compared to the rest of the cast. C-3PO, distinguishable mostly by the concentric circles drawn on his stomach, appears to be standing on top of the Sand Person, as I had not yet mastered depth perception.

As it turns out, I have kept other examples of this natural talent. I’m leafing through an item now which, were it to appear someday in a Sotheby’s Auction catalogue, might be described this way: “Lot 14: Portfolio, magic marker on paper, 26 pages measuring 10″ x 12′, featuring detailed sketches of the Letter People, clearly from the artist’s ‘alphabet period’ circa 1978.” As it would be presumptuous to predict the sale estimate, I will leave that to the experts at Sotheby’s, unless, of course, I decide to will the portfolio directly to the Guggenheim.

I should explain about the Letter People. They were puppet characters on a low-budget TV show during my childhood. Each character embodied a word starting with a letter of the alphabet. Mr. D was covered in “delicious donuts,” Mr. M had a “munching mouth,” Mr. B had “beautiful buttons,” and Mr. T had “tall teeth” (only later would he also sport a mohawk and gold chains). I watched this show all the time.

When I was in the first grade, our classroom was right next to the kindergarten room. And even though I had pretty much learned my ABCs, that room contained a complete set of inflatable Letter People dolls. I made every excuse I could think of to sneak in there and look at them. And since there was no hope of getting a set for the first grade, I created this sketchbook so that I could see them anytime I wanted. Which I still do about once a week.

I also have a pen-and-ink drawing from 7th grade art class that features a rather majestic owl in the gloved hands of its trainer. Miss Lade, the art teacher, gave it an A. I know this because she wrote the grade in pencil directly onto the sketch. That practice is generally frowned upon by conservators in the art world, but in my case it gives insight into the artwork’s original reception.

Incidentally, Miss Lade was a brilliant artist but did not seem to be a happy woman. She almost never smiled. Years of trying to teach art to obnoxious 12-year-olds had no doubt killed her spirit. It didn’t help that in 1984 — the year I was in her class — Kool & the Gang came out with a song called “Misled,” which sounded just like her name and had the unfortunate line, “She’s as heavy as a Chevy.” It was eventually banned from the art classroom.

Miss Lade always spoke with a thundering voice. I remember once when she yelled at one of my friends for mispronouncing the color “orange.” I can still hear her shouting: “There’s no such thing as urnget!” I wasn’t much better as an art student. She wrote in my yearbook, “To a nice young man, who can really drive you nuts.” I get the same comment on my course evaluations to this day, minus the word “young.”

One day we were drawing in class. Another of my friends started his sketch, then took it to Miss Lade’s desk for critique. She rolled her eyes and yelled, “No, no, no.” And she erased half of what he had drawn and re-drew it herself. Then she sent him back to the desk to continue working. Instead, he sat quietly for 15 minutes doing nothing, hunched over but only pretending to draw. After that he went back to Miss Lade’s desk to show her his “progress,” which was nothing more than what she herself had done. At that point everyone at my table took great delight in hearing her yell, “No, no, no,” and begin furiously erasing her own work.

I think of this sometimes when I’m grading essays and end up crossing out words which I myself had suggested on an earlier draft. There’s a good chance Miss Lade put a curse on me.

I had great hopes to further my art career in high school, but fate dealt me a cruel blow. In the semester that I took art as an elective, the teacher got sick, and a lady from the home economics department filled in. She was very kind, but art was simply not her expertise. So with no professional guidance, my talent withered on the vine. Even worse, I was stuck at a table with a goth kid whose only purpose in life was going to see “The Rocky Horror Picture Show” every single weekend and throwing hot dogs and toilet paper at the screen. He told me about this in detail every single Monday. I have disliked Mondays ever since.

Eventually I gave up my artistic pretentions and became an English teacher. Even when the Grown-Up Coloring Book craze swept the country last year, I held back. After all, when you peak at age 5, it’s all downhill from there.