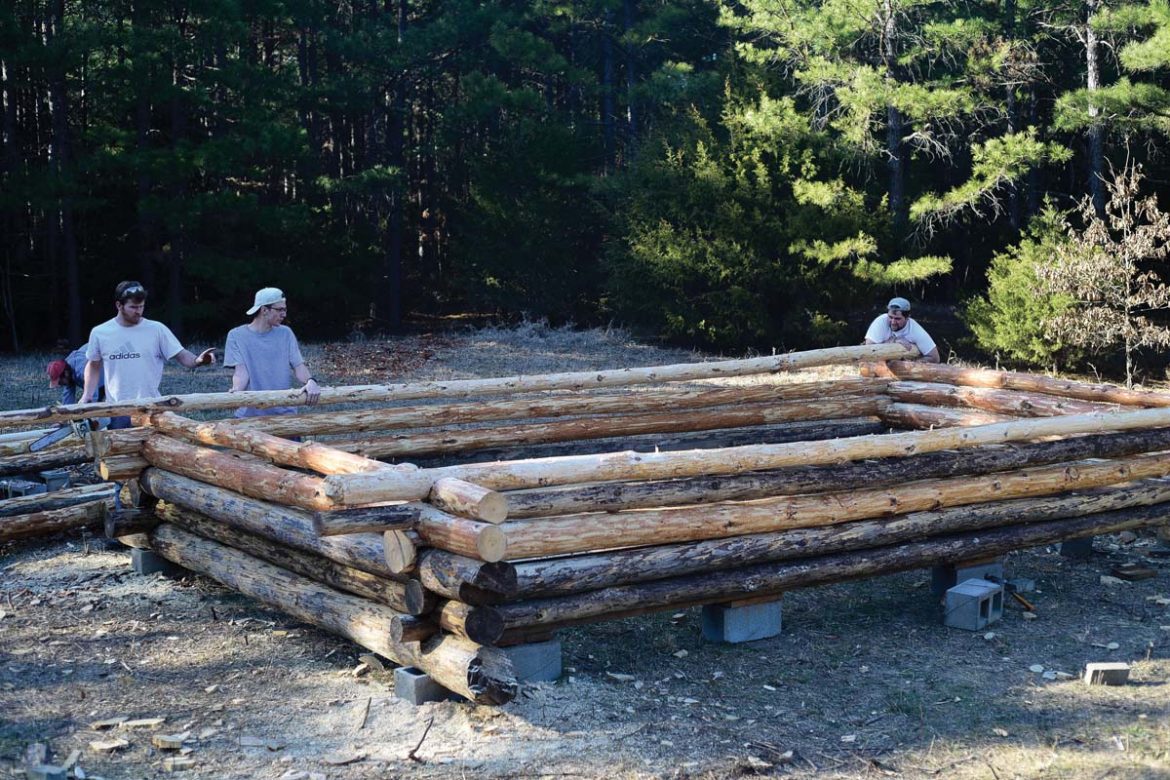 A group of Harding students are chopping down trees and living out their childhood dreams playing real-life Lincoln Logs 30 minutes away in Joy, Arkansas.

Juniors Locke Adair , David Taylor and Daniel Evans, sophomore Trey Davis, and freshmen Mitchell Mayes and Hayden Mathews, along with a few others, are using a piece of land and its resources as their only means to build a log cabin on the site. Dr. Scott Adair, associate professor of Bible, is leading the group of men in their efforts. According to Locke Adair, the men have made a pact not to shave their beards until the cabin has a roof.

“The pact is more of an encouragement to actually build it,” Locke Adair said. “Because we know it would be a good thing to have, do and build.”

According to Locke Adair, it started when he and his father watched the movie “Jeremiah Johnson.” Locke Adair said Jeremiah’s bearded, mountain-man lifestyle from the movie inspired the Adairs to start the no-shaving pact.

“Once you set some parameters, like not shaving, it makes the goal to complete the cabin more realistic,” Mayes said.

Locke Adair said he and his father talked about the idea of a cabin project his freshman year, but after a few trees were cut down, schedules got busy and the project soon died out. Two years later, the logs and machetes are being put to use. Davis said the men are most productive when they get a big group together on the weekends to work.

According to Locke Adair, the plans are to create a 13 feet by 22 feet, one-room cabin that can be used for camping, hunting or just hanging out. He said the project has not cost anything so far because the logs used for the project are sourced from the trees on the property. Locke Adair said once the group starts to work on the roofing and flooring, there may be some associated costs. He said he plans to spend his spring break on the land camping out to work on the cabin.

According to Taylor, working on the cabin with the group has been an enjoyable experience.

“There isn’t anything manlier than growing out a beard and building a log cabin out in the middle of nowhere,” Taylor said. “We are all just teaching ourselves as we go. Scott (Adair) is also sharing a lot of safety advice and his basic understanding of tools with us.”

According to Davis, the individuals in the group who work on the cabin changes, so anyone who is willing to put in hard work and time is welcome to join. Davis said the thought of building a cabin with his friends while using materials from the land excites him. Davis said although the project requires a lot of hard work, it is very rewarding.

“There is something about a tree falling and smashing the ground that is pleasing to a man,” Davis said.