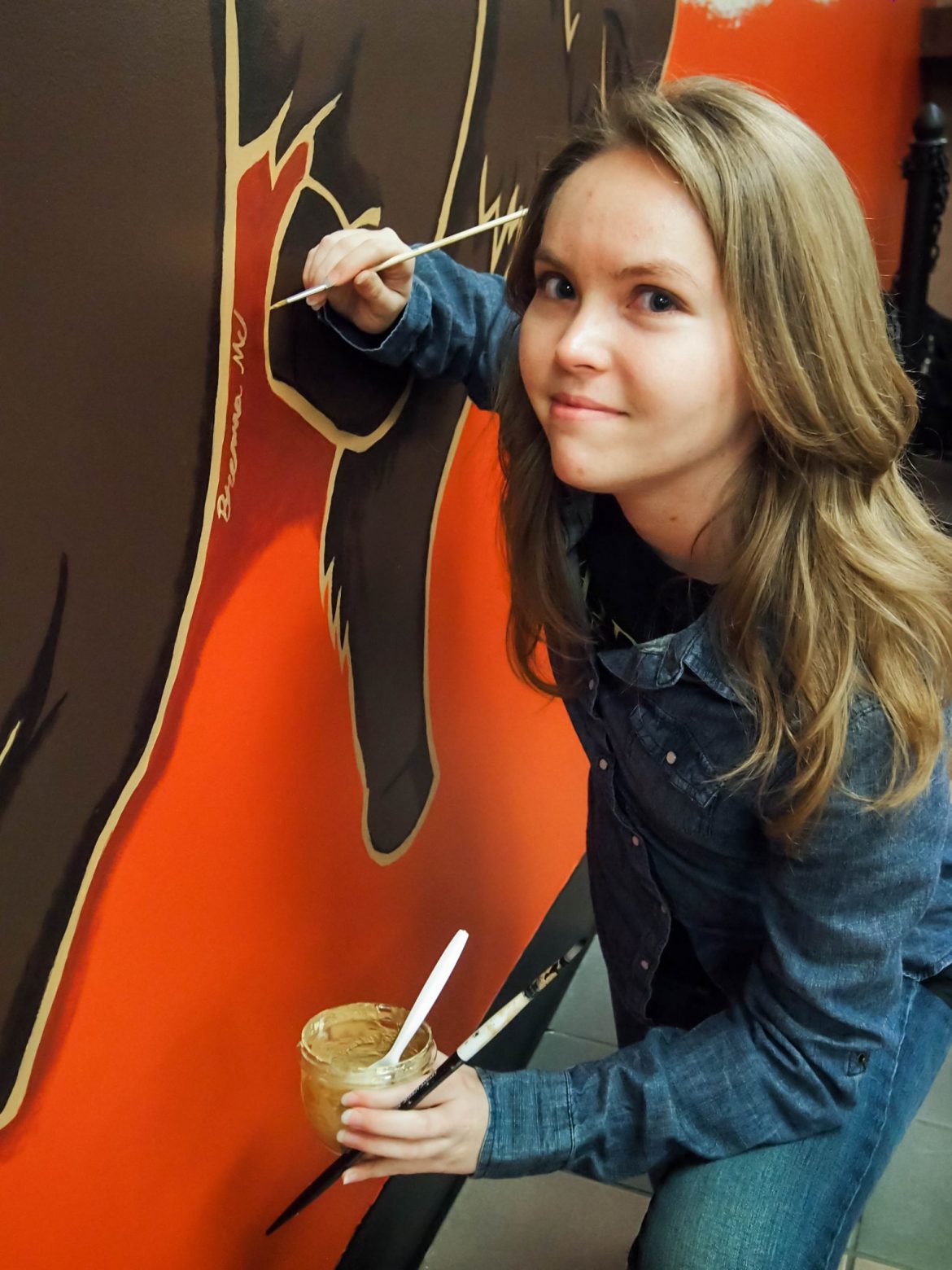 As seen on the walk to Einstein Bros. Bagels or the mail boxes, there is a new mural in the Hammon Student Center. Designed and painted by junior art major, Brenna McKee, the bison mural is another addition to the recently renovated space.

Even after the addition of Einstein Bros. Bagels and the remodeling of the P.O.D. Market, the Student Center seemed to be missing something, according to assistant professor of art Beverly Austin.

“Everybody saw the big blank wall,” Austin said. “Before school started I went to Daniel Adams (chair of the Department of Art and Design) and we discussed having a student paint something there.”

McKee was selected, and the mural became her project for her Advanced Painting class.

“I did a survey first of 100 people for the design,” McKee said. “It was interesting to hear other peoples’ opinions about what needed to go up there.”

Several designs were submitted for approval, and President Bruce McClarty, Executive Vice President David Collins and Campus Life Director Logan Light were involved in choosing the right one for the space. According to Austin, several logistical concerns had to be worked out. McKee even took into account the surrounding colors in the Student Center.

“No one probably realizes how many man-hours there are in planning,” Austin said. “It’s one thing to have an idea; it’s another to make sure it looks good in that location.”

After deciding on a design — three bison trailed by a cloud of dust — McKee used a projector to transfer her art onto the wall. She then started the painting process, which began early last fall.

“I painted when I could,” McKee said. “On my class days I usually worked from 10 a.m. until I had to go to class at 1 p.m., and some nights I would come back and work later.”

McKee has been putting the final touches on her mural during the beginning of this semester. According to Adams, the mural fits the space well and enlivens the room.

“As an artist, course you’re proud when you finish a big project like this, but you always see the flaws,” McKee said.

Despite any imperfections she may see, McKee said she has received great feedback on her work. According to Austin, the art department is pleased with the outcome.

“One of the things we are trying to do is give our students different experiences,” Adams said. “Mural painting is something that a lot of students don’t consider as a possible way of creating.”

McKee says it was an honor to take on such a project, and she hopes she can use her art to contribute to Harding again in the future.