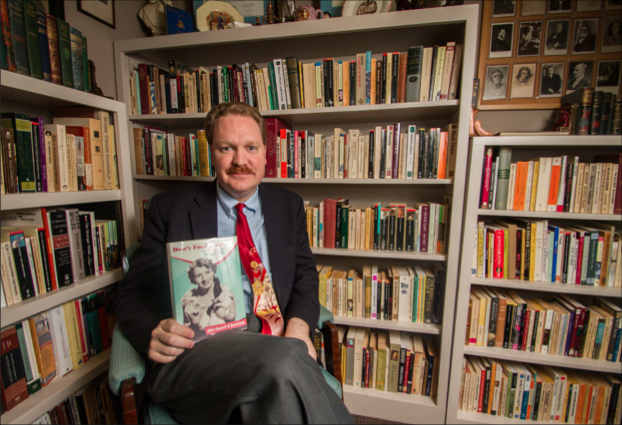 English professor Michael Claxton said he was 8 years old when his sister bought him a deck of magic playing cards. Thirty-four years later, Claxton’s vested interest in magic has reached a pinnacle with the release of his new book, “Don’t Fool Yourself: The Magical Life of Dell O’Dell.”

The book showcases the life of magician and performer Dell O’Dell, as well as her husband Charlie Carrer. According to Claxton, O’Dell (1890-1962) was a pioneering woman in show business who saw success in the fields of magic, strong woman acts, vaudeville and slapstick humor. One of her numerous impressive feats on stage included balancing a sofa on her forehead while climbing a ladder, Claxton said. O’Dell even had her own television show in the 1950s, “The Dell O’Dell Show,” for which she was nominated for a regional Emmy award in Los Angeles in 1953.

Claxton said he had the opportunity to read through O’Dell’s personal scrapbooks in 2006 — nine books full of newspaper clippings, photographs and memorabilia — after which he decided to make sure her story was not forgotten.

Claxton said the most enjoyable part of this journey was talking to the many people who knew O’Dell and saw her perform.

“I spoke with over a hundred magicians and people in show business who had known (O’Dell and her husband), or had seen them perform,” Claxton said. “People were very enthusiastic about sharing their memories, and they remembered them fondly.”

“Don’t Fool Yourself” was published by Squash Publications in Chicago, Ill. Gabe Fajuri, president of the company, is a friend of Claxton who encouraged the book’s initial conception. Fajuri said the book is both humanizing and revealing.

“It paints real portraits of its subjects,” Fajuri said. “(Claxton) clearly understands the people he wrote about …(and) he discovered a considerable amount about (O’Dell’s) early life and career that no one else ever has.”

Claxton said the book was written for those who are interested in magic history and those who simply enjoy a good biography. It is a lengthy book of 332 pages, but it also contains 115 photographs showcasing O’Dell’s life and career.

“I tried to write with a general reader in mind, because I thought this story … might be interesting beyond people who are experts in magic history,” Claxton said. “(O’Dell) could entertain a room full of children, and then go across town and entertain rowdy men at an ELKS club dinner. … And to hold the attention of those two separate groups takes an enormous amount of personality and charisma.”

“I have no doubt those without even the slightest affinity for magic will be drawn to an unsung heroine of mid-century American culture, which is the hallmark of a story worth telling,” Carpenter said.

A man, a van, a plan to end homelessness