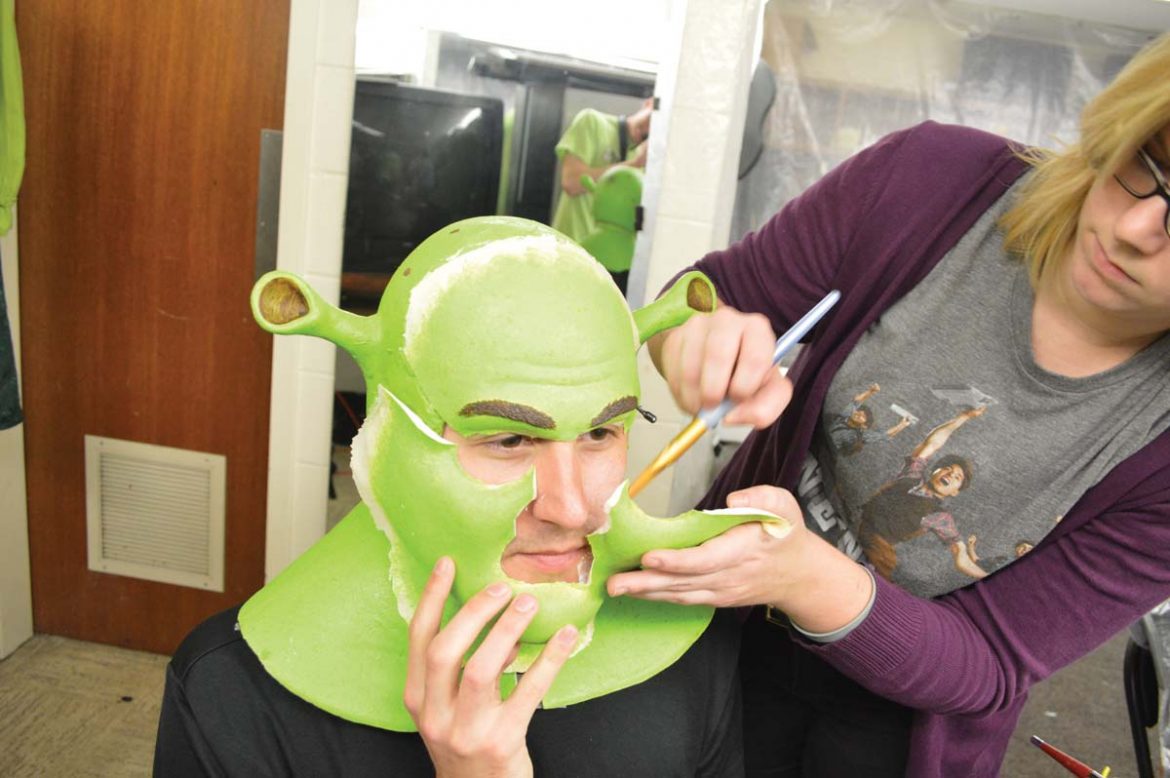 For the Homecoming production “Shrek The Musical,” senior James Morgan undergoes a tremendous make over. Complete with latex prosthetics and a padded suit, Morgan becomes Shrek the ogre.

“It takes about thirty minutes to an hour to put it all on,” Morgan said. “The face is broken into three pieces including the forehead, the nose and parts of my face.”

The transformation starts with the cowl: a full headpiece that leaves nothing but Morgan’s face visible.

“We buy a one size fits all, so that’s why we have to cut (the cowl), because my face is pointy,” Morgan said. “The guy literally said, ‘your nose is really big.'”

The prosthetics are purchased premade by the theatre department. Once in place, adhesive i s applied to Morgan’s forehead to begin the prosthetic attachments. Morgan said that once the cowl is in place, his ability to turn his neck virtually goes away.

“I can turn as far as my body goes,” Morgan said.

Sophomore Emily Ann Braziel is the head makeup artist for “Shrek the Musical” and applies makeup to Morgan before every show.

“The mask breaks apart from the adhesive, so we use new prosthetics every show,” Braziel said. “We were taught to do touch ups on the mask and cowl between breaks.”

The only other character who requires prosthetics in the show is the witch, played by sophomore Janet Jones. According to Morgan, a musical that requires the main character to be a singer who is also wearing prosthetics is tough because blocked nasal cavities and a restricted mouth can affect the sound of the voice.

“The (new) nose is big enough to where it doesn’t press down anymore,” Morgan said. “The original was constricting my nasal passage and it actually screwed up my singing which is quite frustrating.”

After the four pieces have been attached, Braziel then uses a spackle that dries clear on the cracks and unsmooth surfaces to secure all of the pieces together. Following the spackle, she uses a mix of green paint and adhesive to apply the finishing touches to the mask.

Check out thelink.harding.edu this weekend for a video of the process from Alex Valdes.

Siblings to perform as part of Lyceum