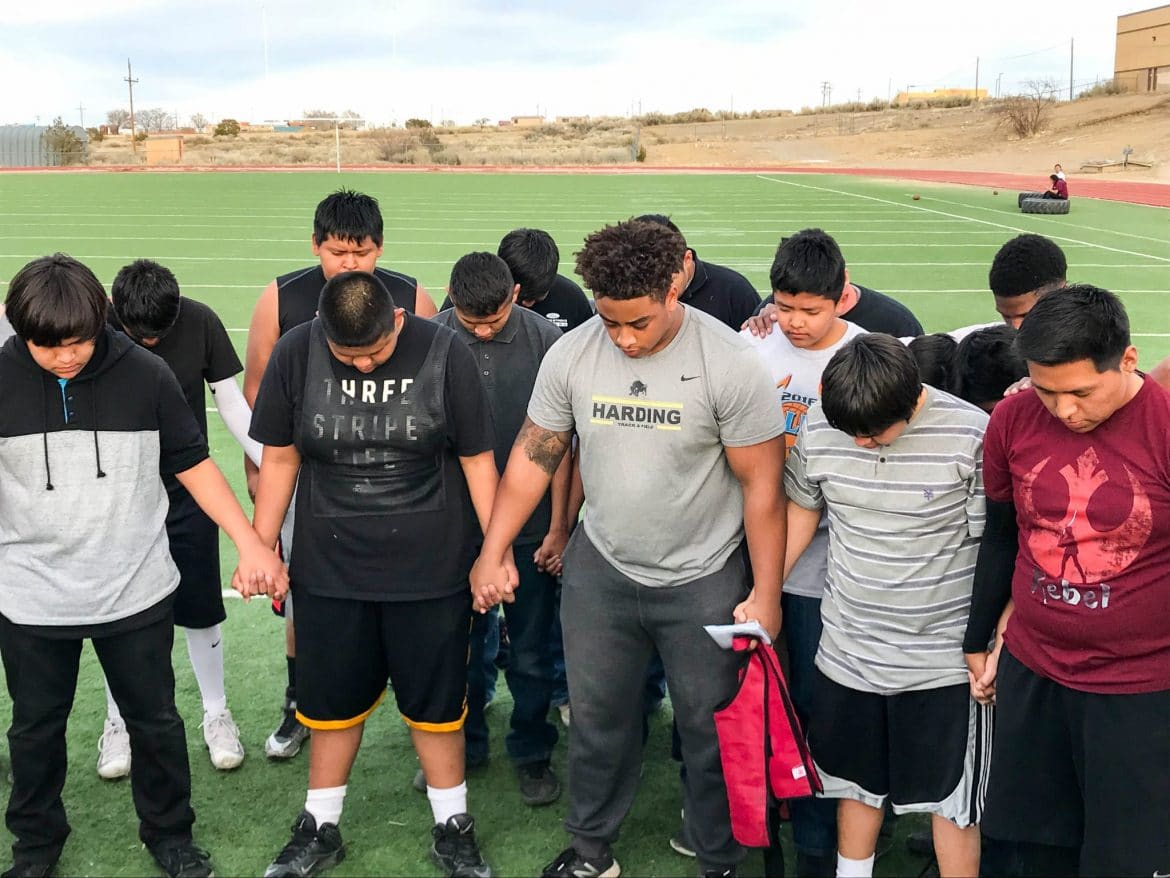 For the past 20 years, Matthew Schmitz,  assistant director of admissions, has traveled to Crownpoint, New Mexico, during his summer vacation to work with the Navajo community.

While there, he noticed the older boys of the community had stopped going to Vacation Bible School. In order to re-engage those teenagers, Schmitz and his team decided to host a football camp for the high school boys over spring break, in addition to their work with the community.

On March 3, that goal became a reality when their mission team of 31 began the 24 hour drive to New Mexico. The team consisted of 15 Harding football players and three families.

Junior long snapper Enoch Williams said that, although the composition of the mission team was unusual, it was also beneficial.

“The families were great,” Williams said. “Because we were so far from a big city, we cooked all of our meals at the church building. The ladies did a great job with all of our meals and we greatly appreciated them. I enjoyed getting to know the dads, moms and kids from each family. They played the biggest role in the trip.”

Schmitz believed the trip was an example of the way God can be glorified through families.

“God can work through his people, of all different ages and talents, together, to bring others closer to him,” Schmitz said.

Loan counselor and financial aid officer Heather Harrell, who attended the trip with her family, said the biggest project of the trip was the football camp, but the team also served in other capacities.

“Our group led the worship services while we were there and we had several Navajo young men join us for that,” Harrell said. “The Christian leadership of the men in our group was truly a blessing.”

“We only had five guys on the first day of camp because they weren’t in school, but by the last day, we had 24 young men there,” Simmons said. “Three of the four nights they actually came back to the church and we had a meal and played games.”

It was the fellowship after camp each day that junior offensive lineman Mills Bryant said he enjoyed most.

“My favorite part was having the Navajo kids over to the church at night and eating and playing games with them,” Bryant said. “The fellowship was great. God was working through relationships and growing all of us.”

Harrell said she was impressed by the way the football players interacted with the students.

“Our group of guys did an amazing job encouraging and speaking life into these young men.  They made it clear that they were not there for football alone, but to share the love of Jesus,” Harrell said. “It was such an encouragement to see our young men boldly profess their faith to these young Navajo men.”

Simmons, who only sees the players in a competitive atmosphere, said he was blown away by the players efforts and desire to share their faith.

“Their boldness was super encouraging (and) very inspiring,” Simmons said. “The biggest thing that I took back from that trip was what a powerful voice our young men have, how people really look at them and listen to them. We really have been given a large platform. We have been given a voice and we need to use it. We need to be bold with it.”

“TrumpDate” News From the White House