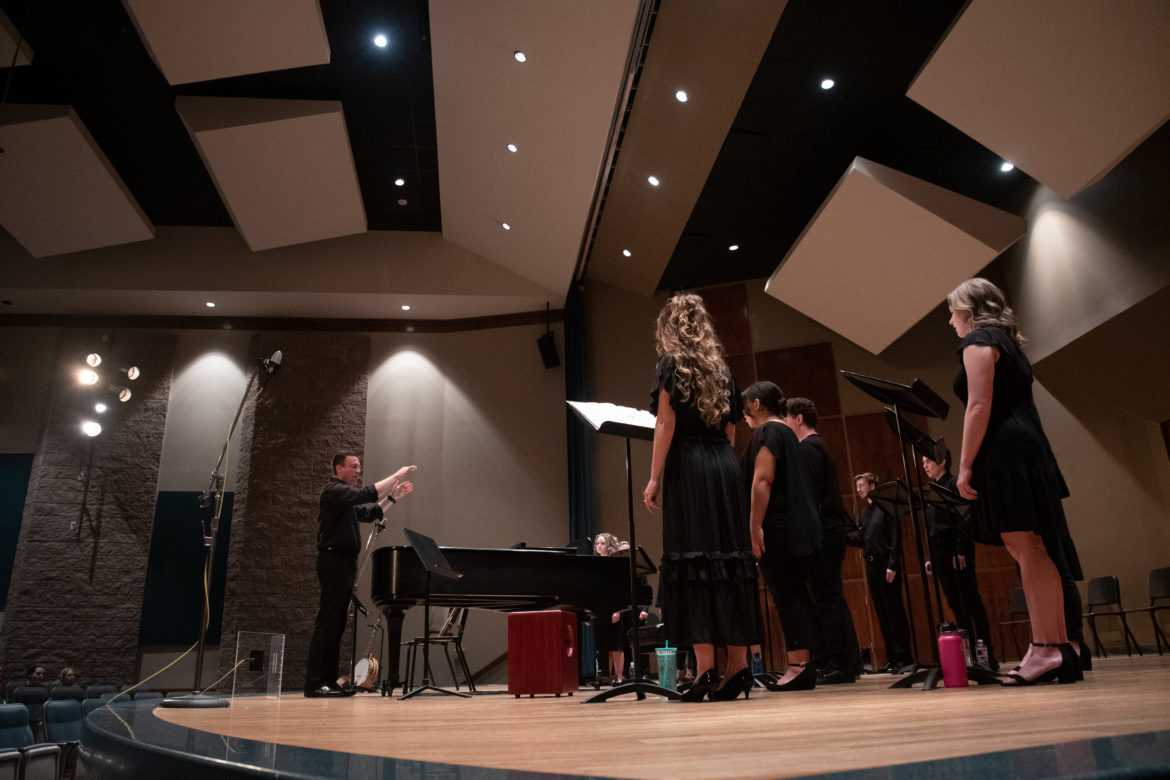 One Harding music professor has a way of transforming musical moments through small gestures.

With one subtle movement of his fingers while conducting, chorus director Kelly Neill can lead students to sing a musical phrase in a beautiful and unexpected way, Dr. Susan Shirel, assistant professor of music, said.

“It’s been really neat to watch him as such a graceful and expressive, but minimally expressive, conductor in the ways that he’s able to pull out these magical sounds from ensembles,” Shirel said.

Neill will direct the Harding chorus next Thursday, April 21, in his final concert at the University before beginning a career in full-time ministry this summer.

Neill said reflecting on the upcoming chorus concert feels bittersweet because he has loved his job of working with college students and teaching music over the past 18 years.

“Working at Harding has just been a dream come true,” Neill said.

Senior Erin Fouss, who has sung in choral ensembles under Neill for the past four years, said she will miss seeing her director and his positive smile each day. Fouss said she appreciates Neill’s fun-loving approach to music and the way he connects with students outside of their roles as musicians.

“He just genuinely cares about everyone and always wants to make sure your well-being is good,” Fouss said.

Neill, who came to Harding in 2004, served as concert choir director before becoming chorus director in 2020. Neill has directed the chamber singers ensemble for 12 years.

Neill began preaching at the Olyphant Church of Christ — which is about 30 miles outside of Searcy — five years ago, and said he has loved learning more about ministry and helping people with their faith. Through this experience and other developments in his life, Neill said he felt as though God was leading him in a new direction.

Shirel said Neill has become part of a history of strong choral music at Harding, joining a list of previous directors including “Uncle Bud,” also known as Kenneth Davis, Jr., and Cliff Ganus III. Shirel said the Music Department plans to continue this tradition of high-quality vocal music next semester so that choral singing will remain an important part of Harding’s identity.

Walls said the Music Department is working on a plan to adjust to Neill’s absence in organizing the choral ensembles for next semester, but the group has not finalized their decisions.

Walls also said Neill is a man of outstanding Christian character who will be missed once he leaves campus.

“If I were to make a short list of the finest people I have ever known, Kelly Neill would easily make the list,” Walls said.