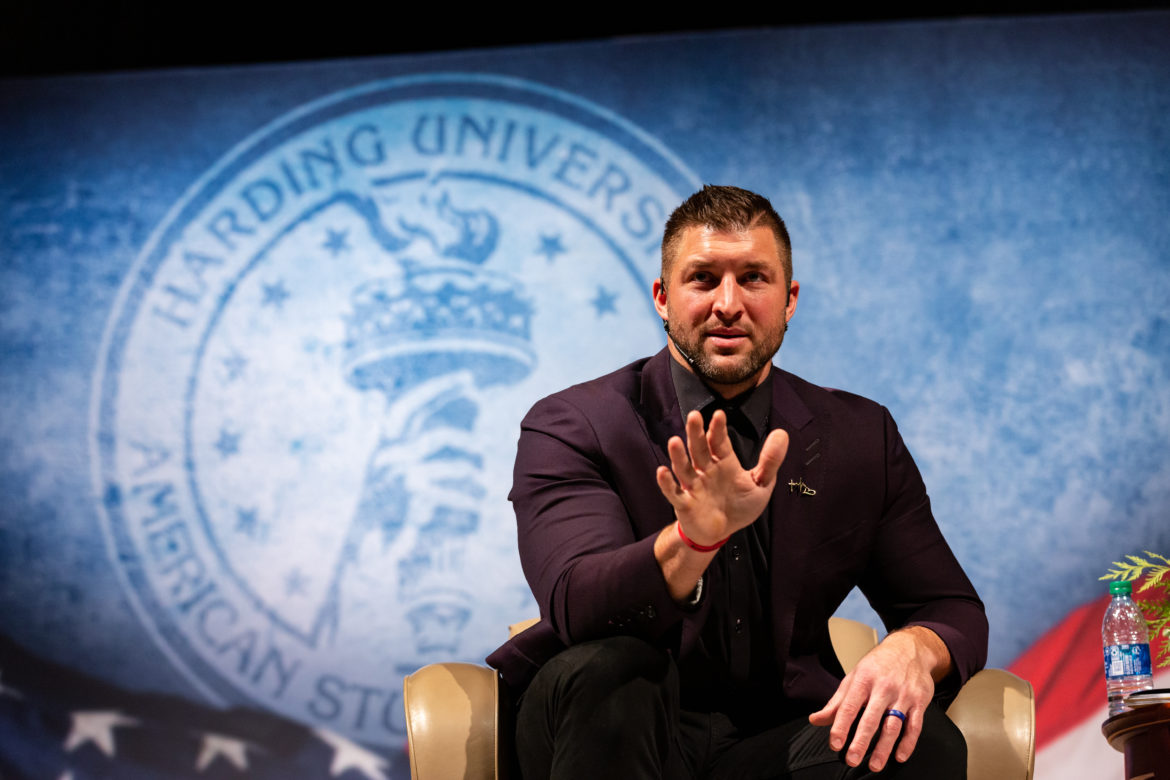 In his lecture, Tebow discussed topics such as encouragement, divine intervention and spiritual gifts, as well as the Tim Tebow Foundation. The foundation’s mission statement is “to bring faith, hope and love to those needing a brighter day in their darkest hour of need.”

Tebow told stories from his youth that influenced him to begin the foundation, from a young boy named Sherwin who had backward facing feet, to his father taking in young girls who were at risk of trafficking. These stories taught Tebow that his mission on earth is to show compassion to those who need it.

“It’s your job, it’s my job: The Great Commission is my job,” Tebow said. “Serving the least, the last, the lost is my job. And it’s your job. That’s what our mission is.”

Associate professor of business Dr. Glen Metheny attended the lecture and said he was inspired by it.

In his speech, Tebow said he wanted the audience members to leave inspired.

“While I hope you leave encouraged, I would rather you leave inspired,” Tebow said. “What ‘inspire’ means is to fill someone with the urge or ability to do something. I’d rather be someone who does something than someone who feels something.”

Senior Cody Porter said he has been a fan of Tebow’s since 2008 when the Florida Gators won the national championship – his first sports memory. Since then, Porter has followed his career and admired his work.

“Growing up and hearing him give motivational speeches on ESPN and watching him do other things, I knew I had to go see him when he came to Harding,” Porter said. “Whenever he first walked on the stage, I couldn’t help but smile and go crazy. Seeing my first sports idol in person was awesome.”

“As a college football fan, it was exciting to him on campus,” Metheny said. “But, more than football, his message of hope and healing and helping others far exceeded any expectation I had about his notoriety as a football player.”

Porter said on top of seeing someone as accomplished athletically as Tebow in person, the speech itself was inspiring.

“He’s a great speaker and has an incredible message, especially for those who identify with his message and Harding’s message,” Porter said.

Metheny also said that Tebow’s message reminded him how fortunate he is.

“[His speech] reminded me about how fortunate of a life I have lived and encouraged me to help those who are not as fortunate as I am,” Metheny said. “God has given me gifts and talents, and I should use them to be the good and do good toward others.”