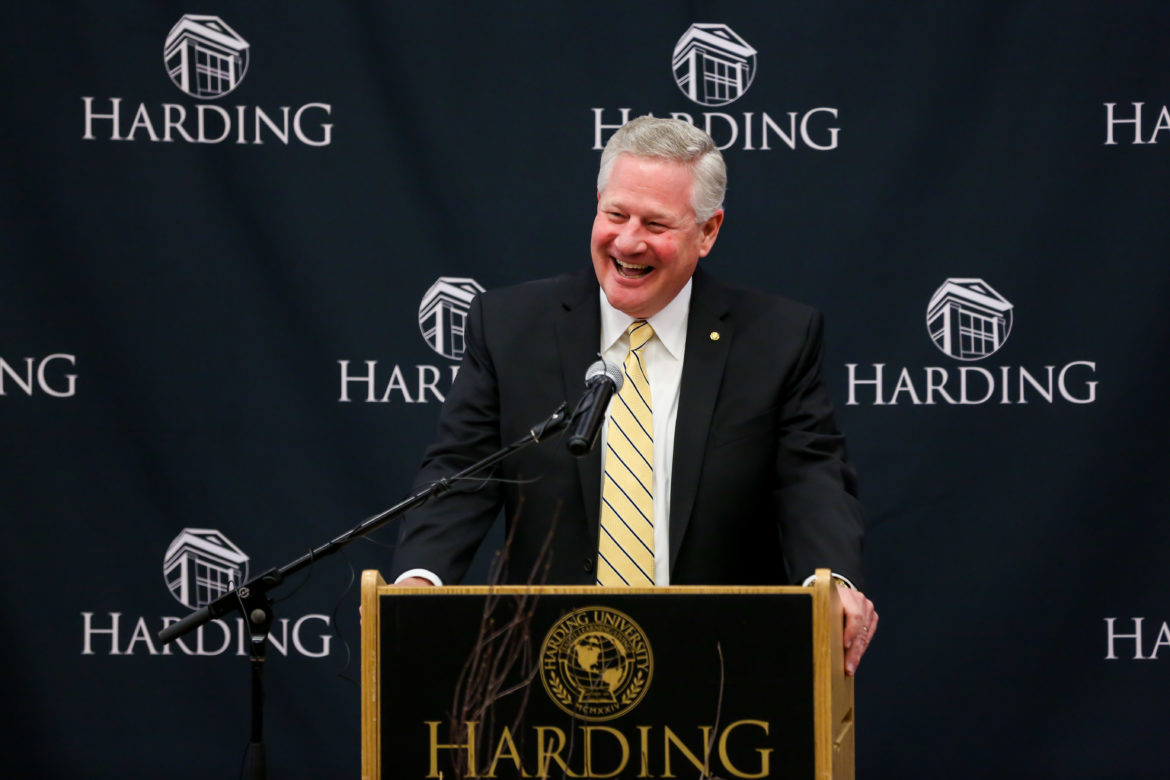 On Wednesday, Oct. 27, Dr. Michael D. Williams was announced as Harding University’s sixth president. Dr. Robert C. Walker, president of the board of trustees, made the announcement on behalf of the board at a press conference in Cone Chapel. This announcement concluded a nine-month, nationwide search for a president.

The board announced in October 2020 that Dr. Bruce McLarty would retire as president, citing “an extremely challenging business environment,” as leading the change. Dr. David Burks has now served as interim president for nearly a year.

Williams has served as president of Faulkner University in Montgomery, Alabama, since 2015. Faulkner is also associated with the churches of Christ. Prior to his presidency at Faulkner, Williams spent 28 years at Harding, most recently as vice president of advancement. He also served as director of admissions and assistant vice president of enrollment services in previous years. Williams earned both his bachelor’s and master’s of business administration from Harding. He received a doctorate of higher education from the University of Pennsylvania.

“I am pleased today that we have found the right person,” Walker said at the press conference. “He is a mature, spiritually sound and Christ-centered man. He aligns with our mission and understands our culture. He brings vision, strategic thinking and the business acumen of an experienced university president. He received overwhelming support from the board of trustees.”

Williams notified the Faulkner board of trustees of his decision to resign on the morning of Oct. 27.

After meeting in person in Searcy during the week of Homecoming, Walker said the Harding board reconvened in a meeting on Zoom on Tuesday, Oct. 26. Williams said he officially accepted the presidency at around 10:30 p.m. Tuesday.

Williams said it did not quite feel real until he drove into Searcy. He said after living here for over 28 years, he considers Searcy home.

At the press conference, Williams said he admired the hard work and dedication of the heroic men and women who paved the way in 1924 for what Harding is today.

“At Harding University, we have a remarkable, and a rich heritage,” Williams said. “A legacy that needs to be remembered and honored. But, the board of trustees did not appoint me to be a curator of Harding’s past — they asked me to champion her future. So I aspire to be an architect — a passionate architect — of a contemporary expression of our historical mission.”

Williams said despite a challenging landscape, he believes the University has a greater capacity than its current position. He said without compromising theological convictions, the University must adapt, excel and courageously move forward.

Williams said Harding’s vision cannot be crafted by him alone.

Williams said the faculty, staff, alumni and students of Harding must collaborate.

“We’ve all got diverse opinions — and that’s how God made us,” Williams said. “He gave us diverse perspectives, and it would be ludicrous for me to think I have some kind of unique vision about the future that nobody else has. The vision needs to be this tapestry of everybody contributing to what the full potential and bandwidth of Harding University can be.”

In the face of what he described as young people leaving religion as a whole at a rapid rate, Williams said he thinks it is time to have a refresh. He said he believes it is time for a new restoration.

Williams said he does not view the church as an organization but as a people.

Williams said he looks forward to rekindling relationships that he had with colleagues at Harding when he was here before. Moving forward, he said he aims to highlight what makes a Harding education relevant today.

“We can dream all day long about what we think it ought to be, but really if the world thinks it’s irrelevant, it doesn’t really matter,” Williams said. “Finding relevance in our mission and how that really makes a difference in the world is absolutely critical.”

Student Association president Ethan Brazell was present at the press conference, and said he was reassured to hear Williams’ optimistic perspective of Harding moving forward as an institution.

“His message of unity and mending past relationships was powerful,” Brazell said. “I think this is a special place and Dr. Williams is the perfect fit to lead this university. I’m looking forward to interacting with him more in the future as we work together to make this school an even better place.”

The Faulkner board of trustees congratulated Williams at a simultaneous press conference on Faulkner’s campus.

“The board has confidence in the strength of the administration and faculty at Faulkner,” a representative said in a statement on behalf of Faulkner board of trustees chairman Dale Kirkland. “We know this school is in strong hands. We will work diligently to get us through this transition.”

Williams will assume the Harding presidency on June 1, 2022. Until then, Burks will continue to serve as interim president.