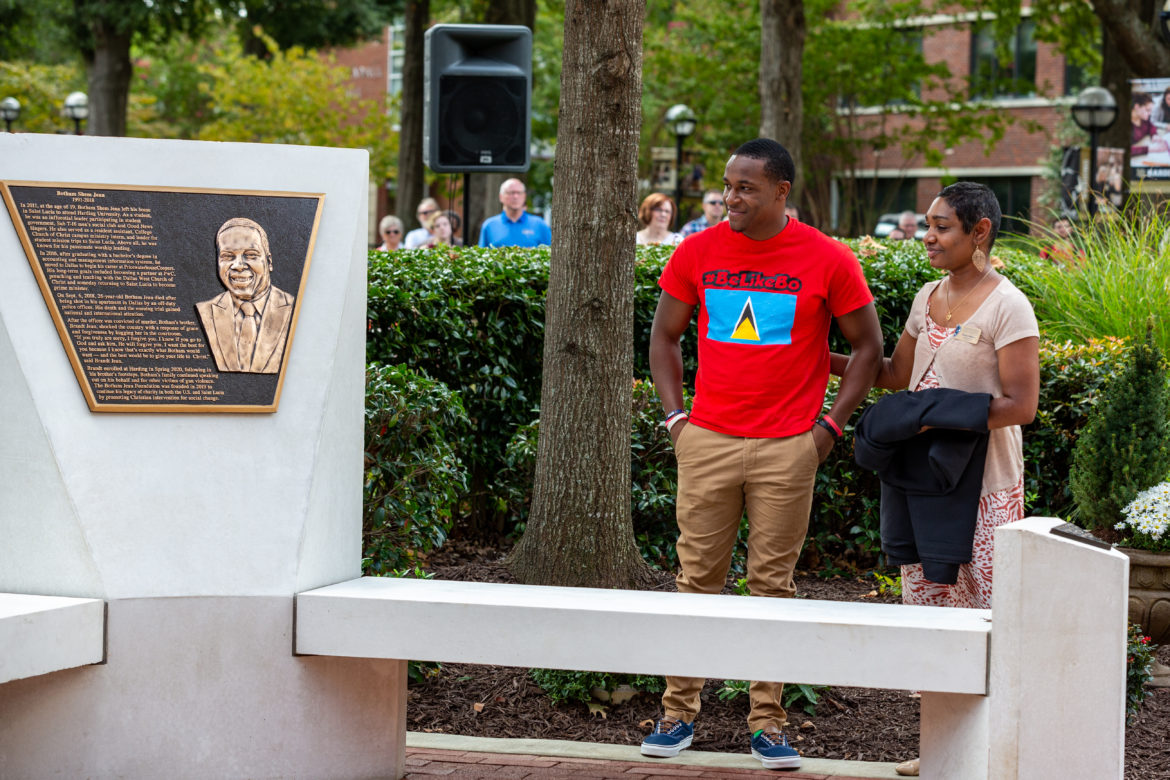 Wednesday, Sept. 29, was a day of remembrance and praise as Harding University honored the life of Botham Shem Jean by dedicating a bronze plaque bearing his image in front of the David B. Burks American Heritage Building.

Jean, a Harding alumnus, was fatally shot by an off-duty police officer in his apartment on Sept. 6, 2018.

“The pain of losing my son never goes away,” Allison Jean, Jean’s mother, said at the dedication ceremony. “But we are comforted by the life that he lived and the promise from God that those who obey his word receive eternal life.”

During his introduction, Burks said Harding chose to remember and honor Jean’s life in three ways: the dedication of the plaque, the continuation of two annual scholarships established in his honor in 2019 and the creation of the Botham Jean Inspiration Award.

The inspiration award is given to a Harding community member who demonstrated faith, displayed perseverance and served as a role model for all. Burks named the first recipient of the award during the memorial: sophomore Brandt Jean, Jean’s brother. Future Botham Jean inspiration awards will be presented annually at Homecoming.

Before the memorial event, Lake remembered and said he was moved when Brandt Jean publicly forgave Botham Jean’s murderer and called her to be like him, which is to embrace Christ.

“It is one of the single, if not the single greatest, act of redemption I have ever witnessed in my life,” Lake said.

Gentry wished to thank those who were in Jean’s life.

Plans for the dedication ceremony commenced when then-president McLarty sent an email to the Harding community June 24, 2020, stating that the University would honor Jean in a physical way during 2021. Harding finalized and officially announced the plan of the special dedication, which was approved by the Board of Trustees, via an email by Burks on Feb. 8.

“It’s a great time to remember Botham, to honor his legacy here but also to introduce him to a new generation of students who have come here and did not know him,” executive vice president David Collins, who helped plan and organize the memorial, said. “And I think that’s the importance of the memorial that we’re placing on campus in order to keep his legacy and influence alive here at Harding as it was when he was a student [and] as it has been even since the tragedy of his death.”

The bronze plaque, designed by SCM Architects partner Mike Steelman, bears a brief description of Jean’s life and is situated between two attached benches. Burks said he expects the benches to become a place where pictures are taken and memories are shared.

Java & Jazz to be held tomorrow