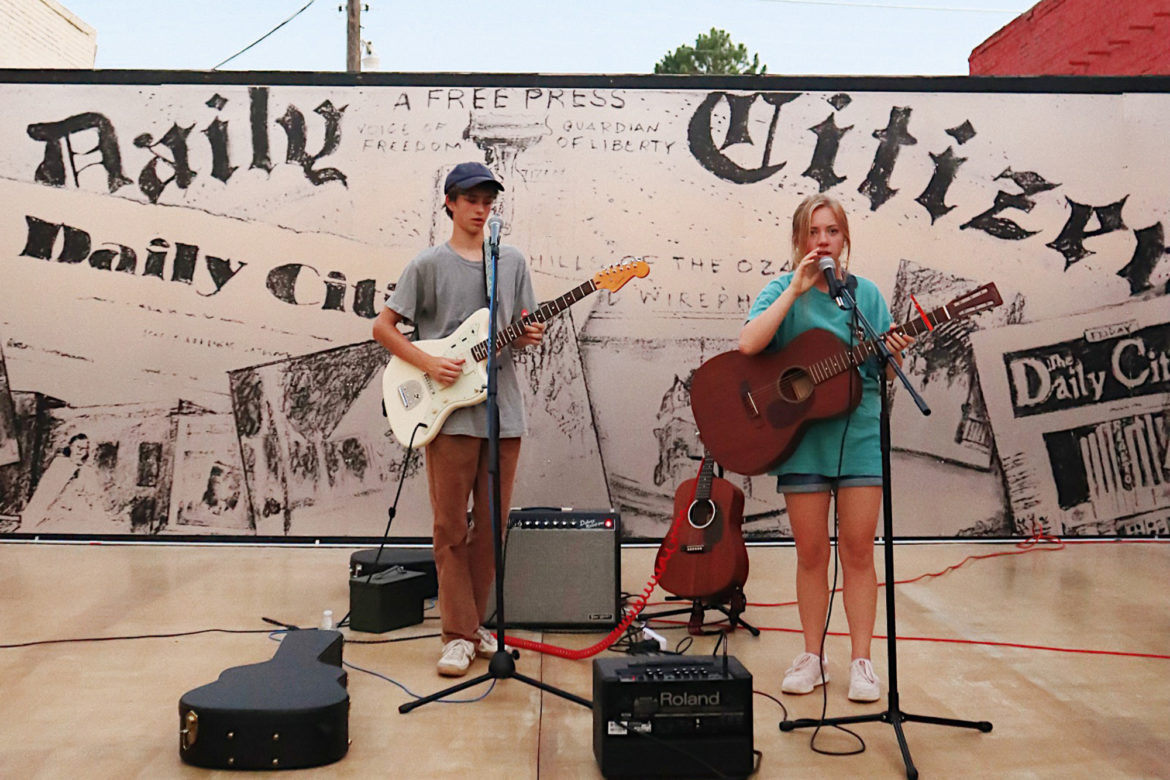 Lilli Grace Barden, a 17-year-old high school senior, said she greatly appreciates the support and unity offered through experiences like the Citizen’s Park concert series. Barden has been pursuing music for the past several years and said the Searcy community is one that loves to unite around a cause and offer its support.

“Searcy — I know a lot of people, and those people are very, very supportive,” Barden said.

Barden’s mom, Elisa Barden, has watched her daughter grow up enjoying singing for others and writing songs. She said a turning point in her daughter’s hobby was the creation of her original song “Mirrors.” Elisa Barden said the lyrics are a personal story of how Lilli saw herself as a young teenager.

“When she sang that song — especially with her friends — it added a depth and a new meaning to her music,” Elisa Barden said. “She’s happiest when she’s sharing her music with people.”

Silas Carpenter performed alongside Barden in Citizen’s Park on Aug. 12. Carpenter, a freshman at Searcy High School, said he started taking his music more seriously this past year.  He said while opportunities and audiences are limited within Searcy, the community has been highly supportive of his music. People have reached out, encouraged him and allowed him to perform at places such as Midnight Oil Coffee House and Citizen’s Park.

Senior Jackson DeJarnette has also performed a few times with Carpenter, as part of the group Jackie Austin and Friends. DeJarnette said he was impressed by the improvements Carpenter has made in the past year, as well as his passion for music of various genres. DeJarnette watched Carpenter’s Aug. 28 Midnight Oil performance, where he played a mix of covers and original songs.

“You can see how confident he has gotten on stage and how he has become a great entertainer, as well as a musician,” DeJarnette said. “He’s got the talent and the determination to be a great artist, and if you have those two characteristics, you’re going to do just fine.”

Both Carpenter and Barden are in the process of creating more original music and hope to continue growing as artists. Citizen’s Park has been a valuable addition to the Searcy community and has given local musicians the opportunity to gig live shows in an area where opportunities for musicians can be limited.